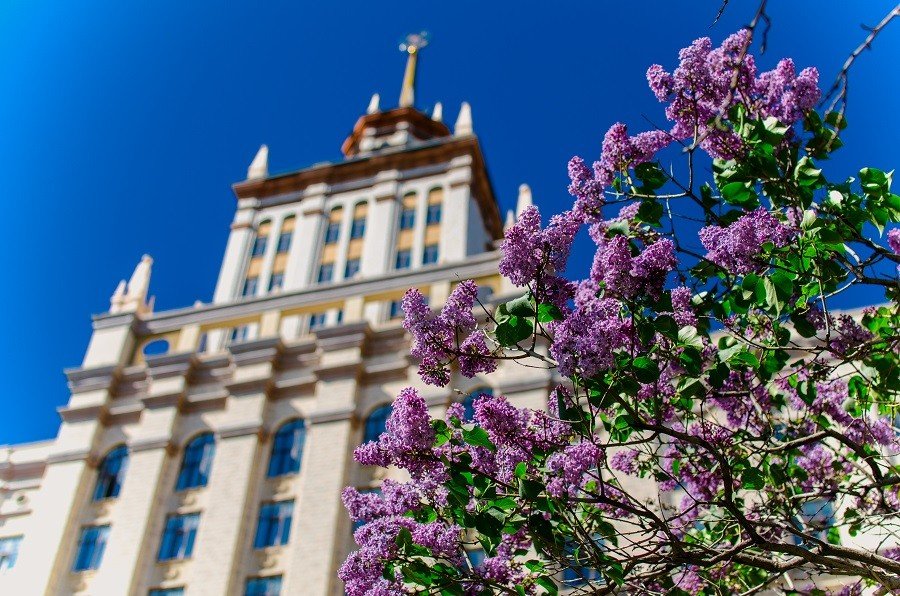 When it comes to the choice of a university, many factors influence students’ decisions. Teaching and research quality and reputation of a university are significant contributors to its international and local appeal. Today different university rankings help students explore performance indicators of universities around the world without leaving their homes. That is why university’s inclusion into world university rankings is a sign of its recognition in the international academic and research environment.

As a result of consistent and hard work, South Ural State University continuously improves its ranking positions in Russia and abroad. The University is building a strong international reputation and is becoming a fierce competitor in the education market.

South Ural State University for the first time got included into the ranking of TOP-1000 universities of the world according to Quacquarelli Symonds (QS) British Consulting Company. This ranking is considered to be one of the most influential global university rankings. Each year, a research is carried out in order to evaluate more than 4 thousand of universities all around the world. By its results, a ranking of the best 1000 universities as well as rankings by specific disciplines and regions gets compiled. In QS WUR ranking, Russia is represented by 27 universities; for 3 of them, SUSU included, this is the first time of being included into the ranking. SUSU is the only university of the Chelyabinsk region included in QS WUR.

Ranking method: on the basis of 6 metrics, the ranking evaluates universities in 4 areas: research, teaching, employability and internationalization. 4 metrics are based on objective quantitative data, the other 2 are based on surveys of scientists and employers. 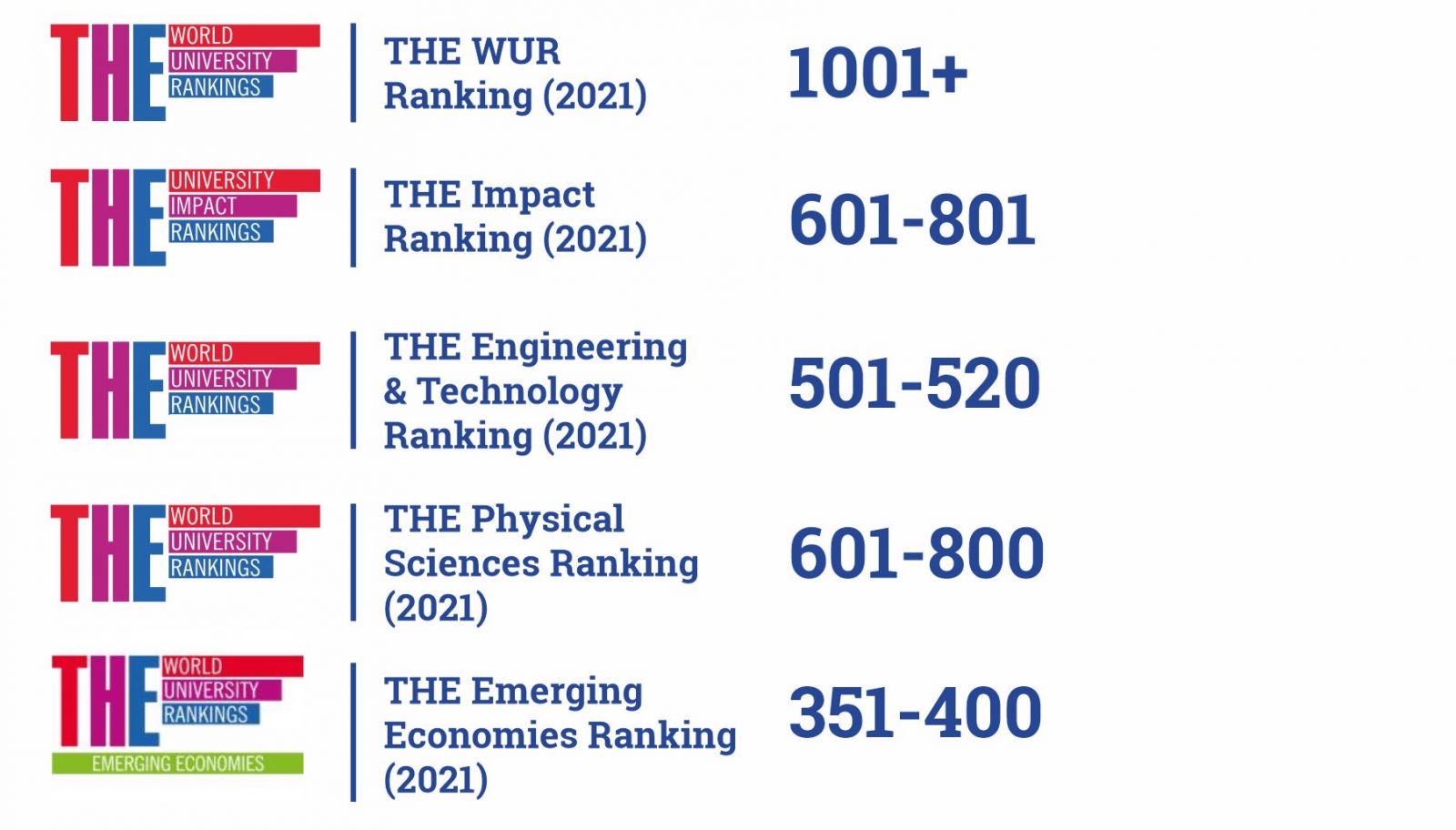 THE Impact Ranking is a new ranking published by an authoritative ranking agency called Times Higher Education which evaluates universities from the position of their involvement into the process of achievement of Sustainable Development Goals (SDGs), approved by the UN General Assembly on September 25 of 2015. In its first issue, THE Impact Ranking evaluated operation of higher education institutions by 11 out of 17 of the sustainable development goals approved by the UN. The ranking is based on data provided by universities themselves as well as by Elsevier publishing house, acting as a provider of bibliometric data.

Analysis experts from Times Higher Education especially emphasized SUSU’s accomplishments in implementation of such sustainable development goals as Industry, Innovation and Infrastructure (the 97th place in the world); Sustainable Cities and Communities (places 101-200 in the world); and Peace, Justice and Strong Institutions (places 101-200 in the world). Let us note that South Ural State University was placed the 301st+ in THE Impact Ranking general global ranking.

The goal of RUR project is to provide a transparent complex tool for comparing universities all around the world for maximally vast audience: university applicants, analysis specialists, people making decisions in the sphere of higher education development at the level of individual universities as well as at the national level. Universities in RUR ranking get evaluated by 20 parameters united in five measurement areas: teaching quality (40% from the university’s score), quality of research (40%), internationalization level (10%), and the level of financial sustainability (10%).

The following principles were laid in the foundation of the ranking:

In RUR Natural Sciences ranking 20 indicators of university evaluation are used, which are grouped into 4 categories of measurement (with 5 in each category): 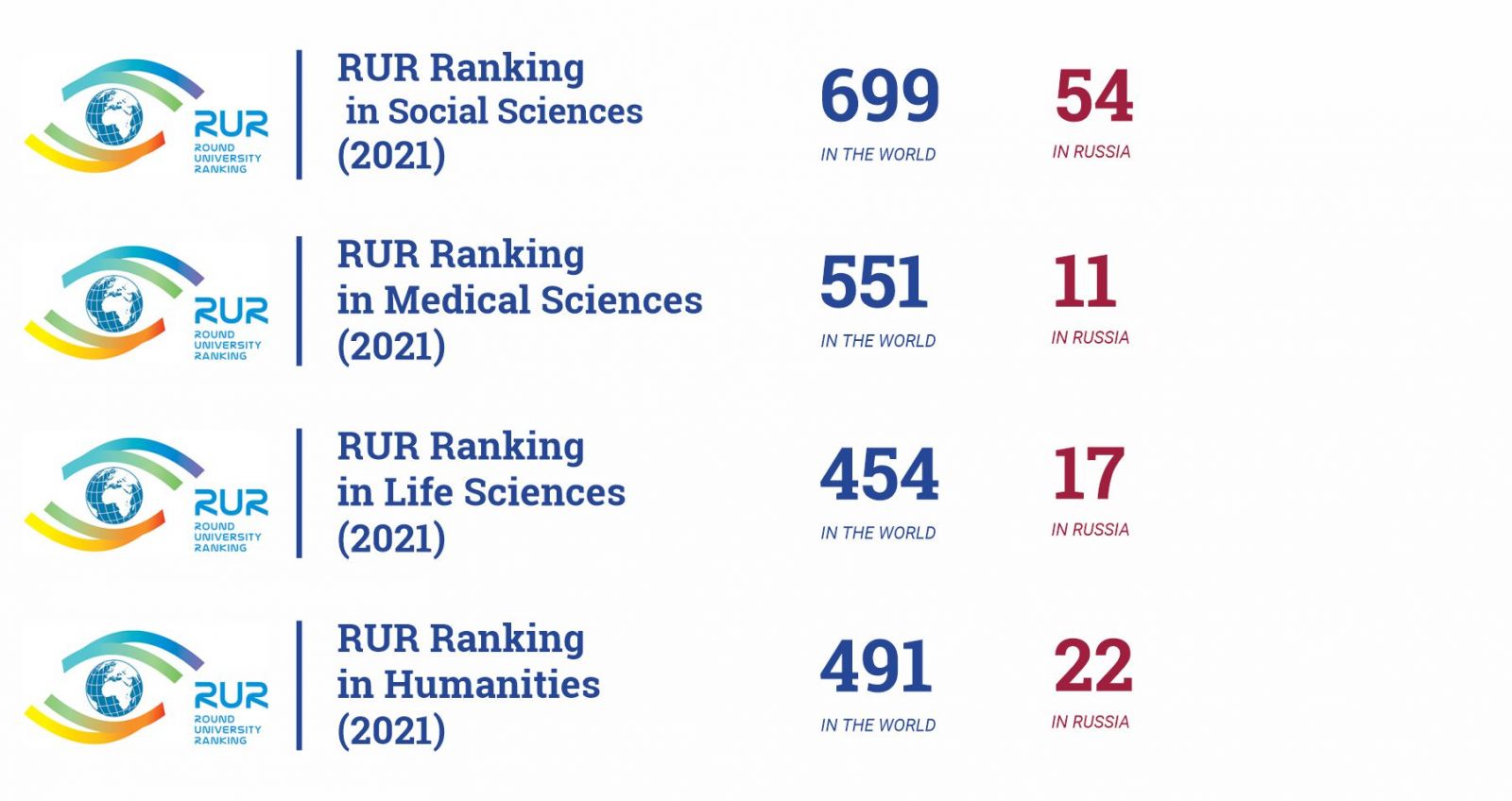 Worldwide Professional University Ranking is compiled based on three areas of university ranking: academic ranking, BC Index ranking, and reputation ranking; positions of universities in global and national rankings as well as results of an expert survey of International Scientific Council members get taken into account.

Worldwide Professional University Ranking is compiled based on three areas of university ranking:

Webometrics Rankings (or Ranking Web) is a system of the world’s universities ranking based on a combined indicator, which takes into account both the volume of web content (the number of pages and files) and the visible influence of these publications by the number of external citations. The goal of the ranking is to encourage universities to publish more qualitative information in the Internet.

Ranking methodology is based on 1:1 correlation between the type of activity and its result. Data is assessed by the following metrics:

The goal of UniRank University Ranking is to reflect approximate popularity ranking of the world’s universities, based on popularity of their websites from the position of reliability and quality. The ranking is not intended to compile ranking of higher education institutions or their programs by quality of education or the level of rendered academic services, and is not an academic ranking.

This ranking is calculated by a special formula based on the data of 5 web metrics:

The goal in compiling the ranking of universities is to evaluate the ability of universities to provide its alumni with high-quality knowledge, skills and abilities regarding conditions for their obtainment and the result of their application. Training quality of a university’s alumni is evaluated by quantitative parameters of their educational and research activity as well as by qualitative characteristics which reflect the opinion of key reference groups: employers, representatives of academic and scientific societies, as well as students and alumni.

RAEX Ranking Agency (RAEX-Analytics) also publishes university reputation rankings in the extended fields. The rankings reflect the results of universities assessment by respondents with regard to quality of education, demand for graduates among employers, as well as the level of scientific-and-research activity. The representatives of the academic and scientific communities take part in the surveys, as well as the representatives of employer companies, students and graduates.

The rankings within Engineering, Natural Sciences and Mathematics and within Economics and Management comprise 50 universities of Russia, which are considered to be the best ones in these fields by the respondents. South Ural State University holds position 28 in the field of Natural Sciences and Mathematics, and position 38 in the field of Economics and Management.

Performance of universities is evaluated by six parameters in a 1000-point grading scale; integral grade is formed by 6 main areas: education (20%), research (20%), social environment (15%), international and interregional cooperation (15%), innovations (15%) and the university brand (15%). Based on each of the areas, six private rankings get published as well.

In 2018, the Russian International Affairs Council (RIAC) published their Website Internationalization Ranking. Analysis of 65 English-version websites of Russian universities revealed the country’s leading institutions in terms of their web presence and engagement. RIAC specialists examined the number of university web pages and their quality in English according to a set of criteria. South Ural State University is among the top 20 Russian universities for English-language website version.

Specialists divide universities as per the following fields of activity:

Universities are evaluated as per the following criteria:

South Ural State University holds position 9 in the ranking of Classical Universities as of 2017. The share of graduates who received job placements amounted to 96.7%.

The ranking is the summary ranking of the universities which participate in the Vladimir Potanin Fellowship Programme, and reflects an aggregate expert evaluation of the achievements shown by university representatives participating in the Foundation programmes – both students and faculty.

The ranking is built based on the indices in all the Programme contests:

The ranking is being published every year, starting from 2004, includes 75 universities, and is one of the most authoritative and independent evaluations of the quality of education in Russian universities.

In 2018 Forbes magazine published its first ranking of Russian universities, in which South Ural State University took the 90th place. The ranking aims at evaluating the quality of the Russian education and finding out which universities release specialists with entrepreneurial talents, who could feature in the Forbes List in the future or become part of the Russian political elite.

The ranking is based on the data of the activity efficiency monitoring for more than 600 institutions of higher education prepared by the Ministry of Education. The method of ranking takes into account not only the quality of education, but also statistical data on the employment of graduates, the demand for them in regions, and the number of entrepreneurs among them. Also, Forbes studied the biographies pf over 1,600 representatives of the Russian elite — members of the Forbes List and their children, heads of private and state-owned companies, public officials, and parliamentarians.

SUSU in the Rankings