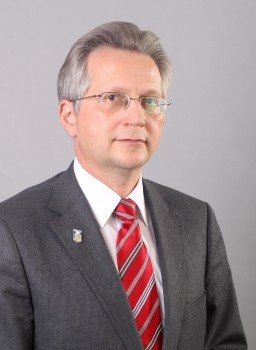 Leonid Sokolinsky was born on February 15, 1960 in Chelyabinsk.

In 1982 he graduated from the Faculty of Mathematics of Chelyabinsk State University.

In 1990 he defended the candidate’s thesis.

From 1991 to 1992 he worked as a senior teacher of the Department of Informatics and Computer Techniques of Chelyabinsk State University.

In 1994 an academic title of associate professor of the Department of Informatics and Computer Techniques was conferred.

In 2003 he defended the doctoral thesis.

Since 2004 he is a head of the Department of System Programming of South Ural State University.

In 2006 an academic title of professor of the Department of System Programming was conferred.

2011 – Dean of the Faculty of Computational Mathematics and Informatics of SUSU.

Since 2013 he is a Vice-Rector for Informatization of SUSU.

He is a Presidium member of the Education Board for Applied Mathematics and Informatics.

He is awarded with a medal named after V.P. Makeyev, certificates of honour from the Ministry of Education and Science of the Russian Federation and the Chelyabinsk Region Governor.

Leonid Sokolinsky is the author of different publications.