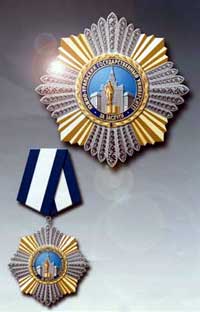 The Order of Merit for the SUSU of I and II class is defined as the top form of encouragement for employees, students and graduates of South Ural State University for outstanding service in development of academic and scientific process, in creation of new forms and methods of educational and military-patriotic work, for great contribution into the university achievements in education, science, culture and economics, for academic excellence and fruitful charitable work to the good for the University.

Award recommendations are proposed to the Rector of SUSU by the heads of divisions upon a decision of councils, branches, faculties, staff meetings and other divisions. In exceptional cases, other individuals proposed by the Rector to the SUSU Scientific Council may be awarded the Order of Merit for the SUSU.

Handing the SUSU Order of Merit of I and II class is performed once a year personally to the awardee during the general meeting of employees and students in the beginning of the academic year.

The SUSU Order of Merit is put on the left side of chest right after or lower than the national awards of the USSR and the Russian Federation.

The SUSU Order of Merit presents an eight pointed star hung on a 5-cornered standard medal-ribbon brooch, the center of the star is decorated with the enameled South Ural State University symbol. Around the symbol it is written FOR MERITS (below) and South Ural State University (above). The front side of the contour lies inside of the laurel wreath made of yellow coloured metal. In the lower part of the wreath is a Roman number I. Four of eight points present symmetrically located yellow coloured corrugated plates, other four present joints of seven silver leaves symmetrically located and alternating with yellow plates. Measures of the Order are 60x60mm, diameter of the symbol is 19 mm.

Traditional Russian medal-ribbon brooch presents a pentangular plate with one corner down and covered with cloth of blue and white colors. The plate has in its bottom corner an ornamental cut for fastening the order to the medal-ribbon brooch. The SUSU Order of Merit of the II class differs from the Order of the I class by the fact that the laurel wreath is made of white colored metal. In the bottom of the wreath there is a Roman number II.

Each Order has its own index number and is followed by a certificate, which contains the name of the awardee as well as the merits and reasons for the award. The numbers of the Order and the certificate are identical.

During the presentation the Order is placed in a box with transparent cover.