Before the meteoric rise: establishment of the university and foundation of university traditions

1943 is the year of the university’s establishment. During the war, the largest tank production complex Tankograd was created in Chelyabinsk, which included 4 enterprises: the Kirov plant, the Chelyabinsk and Stalingrad tractor plants, and the Kharkov motor plant. In such a structure it had been functioning from October 6, 1941 to June 20, 1958.

At that time the training of engineers in Chelyabinsk was conducted at the Stalingrad Mechanical Institute, evacuated from Stalingrad. But after the victory of the USSR in the Battle of Stalingrad, the institute had to be returned back. Then it was decided to create in Chelyabinsk its own alma mater of workers and scientists.

On November 2, 1943, the Council of People's Commissars of the USSR adopted Decree No. 1201-361c “On Measures to Improve the Preparation of Engineering and Technical Specialists for Tank Industry Enterprises” and on the establishment of the Chelyabinsk Mechanical and Engineering Institute (CMEI). By inheritance, from the Stalingrad Mechanical Institute, CMEI received a few study rooms and senior students. Later they were joined by graduates of Chelyabinsk schools and Chelyabinsk residents, who had returned from the front line. In March 1944, a little more than 300 students were studying at the institute.

From the very beginning, the institute set a high standard of research life. The faculty staff was also distinguished by a high level: more than 40 teachers, including professors, doctors of sciences. At the time of establishment of the institute, there were 3 Doctors of Sciences among the faculty members: Nikolai Fedorovich Kunin (Doctor of Physical and Mathematical Sciences), Avraam Nakhimovich Rabinovich (Doctor of Technical Sciences), I. I. Chernobylsky (Doctor of Technical Sciences, corresponding member of the Ukrainian Academy of Sciences ), professor G.M. Gorodetsky (gave electrical engineering courses), Leningrad professor R.Z. Nesselstrauss (gave the course of metallurgical science), V.A. Dobrovolsky and others.

Scientific staff of the University provided diligent assistance to various enterprises: the Kirov plant, the Miass automobile plant, the Chelyabinsk abrasive, electrode, and metallurgical plants. In turn, enterprises supplied the university with specialists. Kirov plant of people’s commissariat of armored manufacture by order of its director Isaak Moiseevich Zaltsman supplied the institute with qualified engineers-teachers, students with laboratories and workshops for practical and laboratory work, provided two dormitories (according to protocol No. 306 of the Bureau of the Chelyabinsk Regional Committee of the AUCP (b.) d.d February 19, 1944). The authorities of Kirov Tank Plant - I.M. Zaltsman, I.Ya. Kotin, N.L. Dukhov - were fully included into the Academic Council of CMEI in 1945. 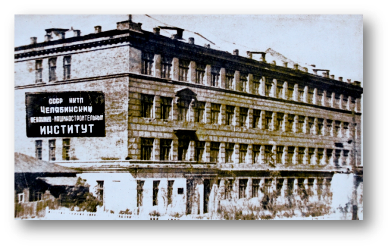 How the university looked like in the first years of its existence? In 1943-1944 the institute was located in different parts of the city: in the building of school No. 4 near the railway station, in one of the schools of Traktorozavodsky district. Later, when the re-evacuation began, the institute was located in a three-story building of the store along Spartak Street (today - Leninsky Prospekt), where the “Detskiy Mir” store is located. In 1945, with the help of the Kirov Plant and the Chelyabinsk Regional Committee of the AUCP (b), the institute received a new building on Timiryazev Street (today - Lyceum No. 11), but this did not solve the problem of lack of training areas.

An interesting fact: the first faculty engineering measurements laboratory was located in a shed with furnace heating, and the first welding laboratory was in the storeroom of the school building. 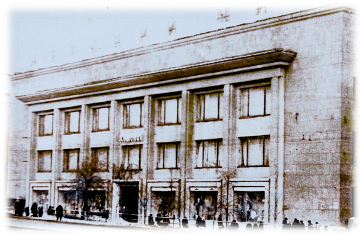 In April 1944, at a meeting of the Bureau of the Chelyabinsk Regional Committee, it was established that the work on the development of the new university was unsatisfactory. The Institute was at a risk of closure. What to say: at the beginning students literally had nothing to sit on and nowhere to live - there were no dormitories. The lack of training facilities, equipment and laboratories was not the only problem of those years.

There were difficulties connected with the management of the educational process: the teachers had to combine pedagogical activity and work in production, which was not easy. Students had to work as well. However, thanks to the efforts of the teaching staff and the enthusiasm of the students themselves, the situation quickly changed. In September 1944, summing up the results of the first academic year, the Council of the Institute concludes that “in all adverse circumstances, the classes did not stop for a single day, the examination session passed, basically satisfactorily, the student and teaching staff were retained, and the CMEI joined the ranks of the operating machine-building universities of the USSR”.

From the first years of its existence, CMEI began to be engaged in research work in the field of mechanical engineering. This was a requirement of wartime: the country needed technologies and people capable of controlling this technique. Already in June 1944 the State Examination Commission carried out the defense of the first diploma projects of students S.P. Pavlov (the topic “Designing a machine assembly department for the manufacture of IS tanks final drives” and A.P. Peskov. They were awarded “mechanical engineer” qualifications.

Initially, there were only two faculties in the Institute:

From September 28, 1948 to April 1951, Mitrofan Markianovich Balyk, Ph.D., an assistant professor of the Aircraft production Department of the Moscow Aviation Institute, directed to Chelyabinsk by the order of the Minister of Higher Education, performed the duties of the CMEI director. On his initiative, there had been carried out the overhaul works of educational building and dormitories. In 1949, the Council of Voluntary Sports Society “Nauka” was established.

In the years of the national economy post-war reconstruction, the country required specialists of a new profile: machine builders, metallurgists, power engineers and builders. This affected the structure of the university – new faculties opened, the reorganization of CMEI began, which marked the beginning of a new stage in the development of the university.