SUSU is a “SMART university which unites Europe and Asia” – nowadays this is the way the university’s motto sounds. Being located in the heart of the Southern Ural, SUSU became the foundation of positive changes which take place in the region: development of powerful industry, preservation of unique environment, creation of multicultural and multinational environment which favors to new discoveries and development of international collaboration.

Today, students of more than a hundred nationalities from 48 world’s countries are studying at the largest Russian university. The university, in the frameworks of the strategy for entering the world’s educational space, is performing the task of vast cultural interaction and mutual exchange between Eastern and Western nations.

An important advantage of SUSU is its geographic position. The Southern Ural is located at the intersection of two parts of the world – Europe and Asia. At the region’s territory, there are about 60 obelisks “Europe – Asia”, the majority of which are located in the Chelyabinsk region. The Southern Urals have long since been a meeting spot of different eons, cultures and ethnic groups. Since the2nd century B.C. till the 15th century, the Great Silk Way, which connected the Western European countries with China, had been passing in this area. Today the tendency to developing new connections between countries of different civilizations and social and economic systems of Europe and Asia is the leading trend of internal and foreign policy of Russia.

These key circumstances became the basis of the new corporate brand mark of the university. The new logo preserves continuity of the best university’s traditions; at the same time it reflects the new development path of SUSU – the multinational, multicultural university situated at the intersection of Europe and Asia.

SUSU sets a goal to be one of the leading universities of the largest continent on Earth – the Eurasia continent. According to the objectives of Project 5-100, the university aspires to strengthening its positions as a scientific-and-research, educational and innovative center among the world’s universities, which would allow it to implement significant theoretical and practical contribution to innovative development and global competitiveness of Russia in Eurasia and around the world.

The logo of SUSU

Leading position of the university, its striving to take dominant positions in educational, scientific and innovative activity are reflected on the logo in the form of mythical creatures – a Gryphon and a Lion, which symbolize Europe and Asia. 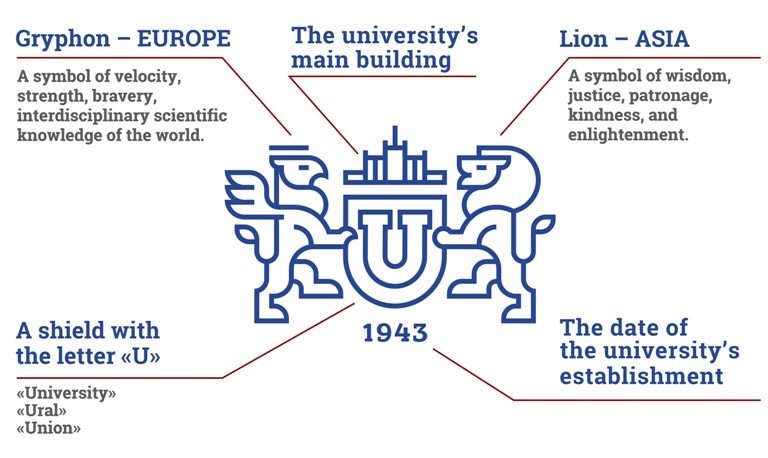 The logo of SUSU is a demonstration of commitment to traditions, respect to the history and culture of European and Asian nations. This is the university’s aspiration to create a common Eurasian future which would be based on the priority of scientific knowledge, respect to personality, and belief in creative powers. Such future should be formed in the present. 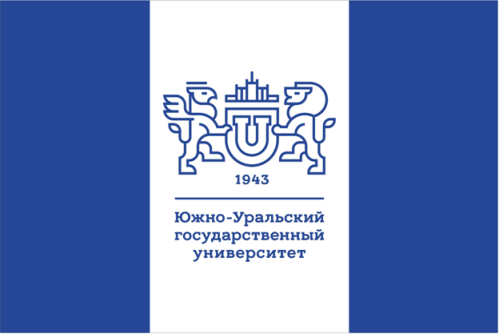 The SUSU flag is a rectangular panel with three vertical stripes on it: a white one in the middle and two blue ones on its sides. The flag’s length and width are in proportion of 2:3. The SUSU logo is placed in the center.

The colors on the SUSU flag have the following meaning:

Joy of discovery, bravery of research,
Yearning for knowledge while we are students.
We are your youth, you are our wisdom,
South Ural State University.

We believe in our tutors, we believe in science,
You are the winning ticket of our life.
We swear to each other in eternal loyalty,
South Ural State University.

Like a bright star which beckons inquiring minds
Each of your departments shines.
A bridge between the present and the future
South Ural State University.