From 1951 to 1962 the Institute was headed by Alexey Yakovlevich Sychev, candidate of economic sciences. Prior to his appointment as rector of the CPI he was a Dean of engineering and economical faculty of the Ural Polytechnic Institute that is why many of the University traditions have become a part of the traditions of the CPI.

New faculties were added to the two existing faculties (Mechanics and technology and Armored fighting vehicles): 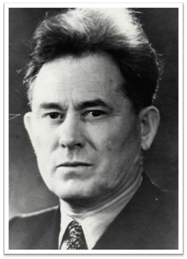 Alexey Sychev had begun an active construction of the Institute and campus.

In 1955 a sports club was created. The Russian military and sport technical society (DOSAAF) had been acting at the institute. Later there would be built the sports Palace, hockey pitch, athletics arena, mass sports activities would start in pine forest. Track and field marathons became a tradition for the University.

In 1956-1957 the first Spartakiad in history of the Institute on 8 sports was held. The University formed very strong sports teams which represented Chelyabinsk region at different level competitions. In 1957 first relay was organized for newspaper “Polytechnic specialists” prizes. March 7, 1957, CPI athletes took part at games in Kazan. There had been established a tradition of CPI sports meetings with other universities of the Urals and Siberia. 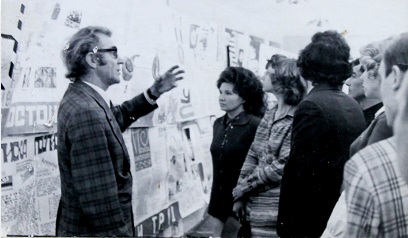 On December 6, 1956, the first issue of the student’s newspaper of the “Polytechnic specialists” newspaper was published. Today it is a well-known and regularly published newspaper “Technopolis”. Its first editor was the candidate of historical Sciences, member of the Union of journalists of the USSR Sergey Vladimirovich Tulinsky. The first issue of the newspaper described a new method of short-circuited arc surfacing, the application of which was discussed at a scientific-practical conference.

The newspaper team has become repeatedly the winner of all-Union competitions and festivals. Newspaper editorial office managed the Department of journalism and photography of Social professions faculty, held review competitions of wall posters, professional analysis of the issues. Since 1962 a school of young journalists under supervision of L. K. Bitieva was opened. It raised 9 generations of student journalists. So far the publications of “Technopolis” become winners of various journalistic competitions.

December 31, 1956 the Institute radio station went on air. And in 1959 “CPI Radio” began its work. From February 1960 the Institute has its own printing house.

Since August 1956, the visits of students to new lands had been organized. Since 1944 students, teachers and staff of the Institute went to the rural areas and helped with harvest. And from 1959 to assist in the harvesting of grain Automotive engineering faculty prepared students-mechanics who worked on the farms of Bredinsky and Varna districts. 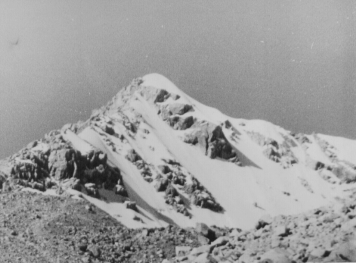 August 5, 1957 climbers V. Samokhvalov, M. Levitin, under direction of Alexander Grigorievich Ryabukhin climbed one of the nameless peaks of the Tien Shan with a height of 4420 meters and given it a name — “CPI Peak”. A. Ryabukhin then worked as a senior lecturer at the department of General chemistry of CPI, where he established the section of winter sports. Until 1972 he was the head of the climbing section of CPI. The athletes received numerous medals of the USSR championships for climbing the mountain peaks.

In 1957, the Mechanics and Instrumentation engineering faculties were opened. In 1958 the Part-time department was reorganized into an independent Part-time Faculty.

To prepare the scientific and teaching staff in March 1962 a Council on candidate and doctoral theses defense in specialties “Engineering science, drive systems and machine components”, “Heat engines”, “Wheeled and tracked vehicles”. In December 19, 1962 M. F. Balzhi, a head of the Department “Wheeled and tracked machines”, the dean of Automotive engineering faculty (1953) defended his doctoral thesis in Dissertation council of CPI. The first Ph. D. was the senior lecturer of “Machines and tools” department V. N. Petrov, who on 16th of May, 1962 defended his thesis on “Research of process of cooling of cutting tools using thin-sprayed liquids”.

By 1962, when the postgraduate department of the ChPI was opened, the university trained the teaching staff at such departments “Machines and Tools”, “Physical Chemistry”, “Building Constructions”, “Gyroscopic Devices and equipment”, “Water Supply and Sewerage”, and others. In August 1962 the CPI’s rector changed. Until 1985 Vitaly Vasilyevich Melnikov was a head of the Institute, who previously worked as the Dean of radio engineering faculty of Ural Polytechnic Institute n.a. S. M. Kirov.

In 1962, the Assembly hall for 1100 seats was opened. In 1965 construction of CPI second building was completed and dormitory No. 6 was commissioned. In 1974, the student’s research center was built by the student design bureau.

During this period, the traditions of art work and cultural sector in the Institute were formed. On April 1, 1963, the institute’s student theatre of variety miniatures was organized, which later grew into the municipal chamber theatre “Maneken” (since 1992) and the student theatre studio “Maneken” at SUSU (since 1996). The theatre was directed by professional directors Anatoly and Boris Morozovs, Yuri Bobkov, Vladimir Filonov at different times.

The first student festival “CPI Spring” was held in May, 1968, which became traditional and was held annually under the name “SUSU Spring”. Today the festival had become international, gathering the best students bands of the country and abroad.

To solve scientific problems, as well as to train students in the CPI, the most advanced computer technology was used. Yet in December 1963, the lamp ECM “Ural”, later “Strela”, as well as “Mir-2” and “M-222” semiconductor computers were put into operation in the university. Since December 15, 1974, engineering and technical calculations were performed on a computer of the third generation EU-1020, then the EU-1060 model was used at the institute. Computer machines then occupied the whole hall of 3B building and part of the classrooms. Despite its massive size, this equipment made it possible to carry out precise economic and engineering calculations and to be used in the educational process.

In 1975, on the basis of CPI was formed the interuniversity computer center. In February of the same year, the Council of Veterans of War and Labor was organized. The Faculty of Pedagogical Qualification of Teachers was opened. June 18, 1976 Museum of the Institute was opened.

At that time, the tradition of students initiation ceremony in the square in front of the main building of the university was also established. Then yesterday’s applicants were given the key of knowledge, their first-ever student card and a warm message.

Since 1985 in connection with implementation of the “Perestroika” reforms began a new stage in life of the country. This could not help affecting on the Institute. But the University easily overcame these times of change due to organizational talent and vision of CPI new rector German Platonovich Vyatkin, who had led the University for 20 years.

German Platonovich Vyatkin — doctor of chemical science, professor, corresponding member of RAS, member of International Academy of higher school, member of the Presidium of the Ural branch of RAS, Vice-President of the Union of rectors of higher educational institutions of the Russian Federation, Chairman of rectors Council in the Chelyabinsk region, member of the Interdepartmental Committee on scientific and technology policy under the government of the Russian Federation. He is a person of progressive views in which the University has acquired a new face and came to a new stage of development.