SUSU Listed in the Top 500 of THE Emerging Economies Rankings 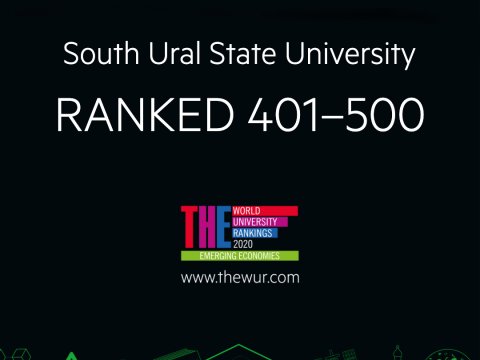 Times Higher Education (THE) international ranking agency has published the results of the THE Emerging Economies Rankings 2020. SUSU has become included in this ranking for the first time.

On February 18, 2020 the regional ranking titled THE Emerging Economies Rankings 2020 was published, where SUSU had taken the position of 401-500. Universities from countries with actively developing economics participate in this ranking: BRICS countries (Brazil, Russia, India, China and South Africa), as well as Argentina, Bulgaria, Hungary, Greece, Indonesia, Kazakhstan, Latvia, Lithuania, Malaysia, Mexico, Poland, Serbia, Thailand, Turkey, the Czech Republic, Estonia, etc. The 2020 ranking features 533 universities from 47 countries, meanwhile the number of Russian universities has increased to 39. China still remains the leader as per the number of presented universities.

Regional ranking THE Emerging Economies Rankings assessed universities from the countries qualifying as the developing ones (according to the FTSE classification). For compiling of this ranking, the same 13 indicators, as the those used for the world ranking, apply: teaching, research, citations, international interaction, and income from production activity (industrial income). However, these indicators have different values, with consideration to the specifics of the developing countries.

The fact that SUSU was included in this ranking is proof of the dynamic development, strengthening of international partnership, efficient work of the leadership and the staff of the whole university.

You can find detailed information on the ranking results here