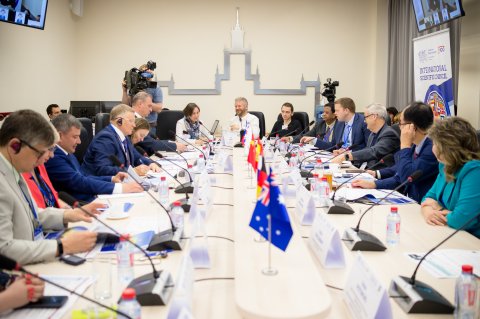 A two-day International Scientific Council has been held at South Ural State University. The world's leading scientists and heads of major corporations expressed high appreciation of the achievements and discussed the prospects of development of SUSU as participant of Project 5-100.

Within the ISC meeting, the university was visited by the new Chairman of the Council, President of Emerson transnational corporation Michael Train; Director General of SMS Group Company Pino Tese; Professor of the University of Melbourne, Doctor Ashokkumar Muthupandian; and Professor of the Korea Institute for Advanced Study, Doctor Jaewan Kim.

The International Scientific Council was established at SUSU for the purpose of coordinating the university's scientific and research, and educational activity in compliance with the best world practices. Establishment of the International Scientific Council is one of the crucial initiatives within the frameworks of fulfilling the university's Road Map program. The International Scientific Council aims at coordinating the scientific-and-research and educational activity of the university under Project 5-100, a program of enhancing the competitiveness of Russian universities in the world's scientific-and-educational space. Among the Council's members are the world's leading researchers with rich scientific-and-research experience in fundamental and computer sciences, engineering, and medicine. 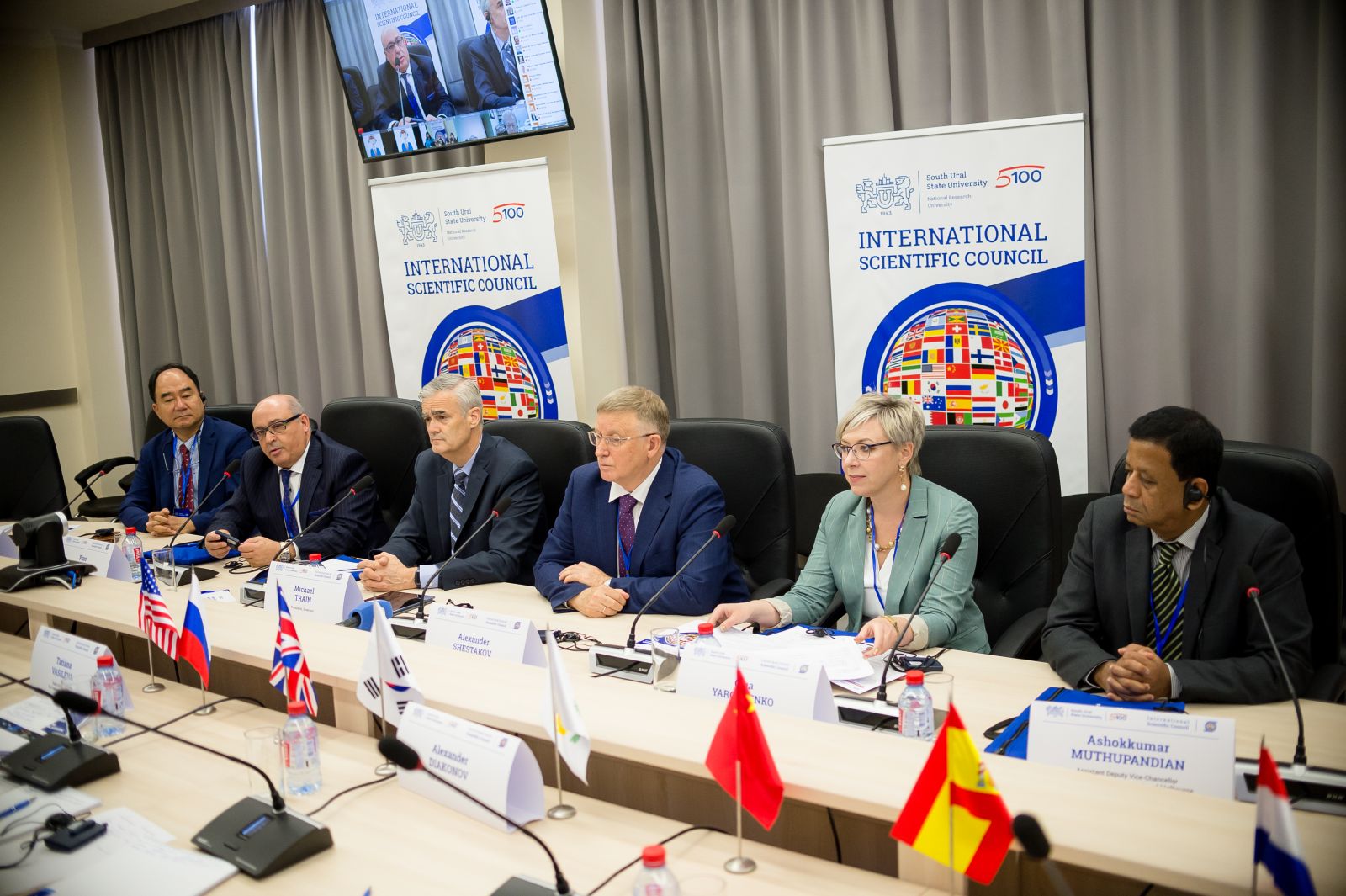 Following the Decree by the President of the Russian Federation, a complex of measures on improving the ecological situation was determined, and in the end of 2018 national project on Ecology was approved. In this context, the university set itself a goal on creating a Russian Federal Centre of the best available ecology-related technologies and competencies. It is planned to find solutions under such blocks as: Clear Air; Clean Water; Developing a Technology for Solid Waste Recycling; Environmental Law; and Humanitarian Eco-Engineering. Active work is being done in each of the directions, and various departments of the university get involved.

At the end of discussing the strategy, the International Scientific Council members provided several recommendations on improvement of the quality of working over projects targeted at a change of environmental situation in the Chelyabinsk Region for the best. 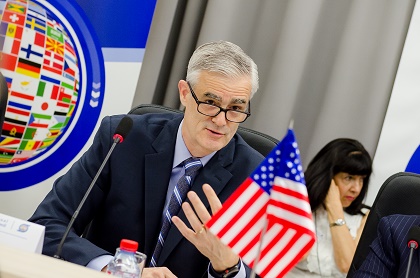 The International Scientific Council discussed the strategy of South Ural State University’s development in the sphere of Materials Science.

Within the meeting with foreign scientists, three key directions which presently are being actively developing at SUSU were introduced: Metals and Alloys, Composite Materials and Magnetic Materials. It is today already that large-scale research projects are being implementing in these directions, and research articles on these topics get published in high-rank international journals.

The university is implementing projects on invention of unique materials and high-quality alloys and their application. However, research is being carried out in other spheres of material science as well and include improvement of production processes, disposal of wastes of metallurgical manufacture, which are hazardous for the environment.

Digital industry is one of the key fields of SUSU as a SMART University of Digital Transformations, which suits the priority tasks of the scientific-and-engineering development of not just our country, but of the whole global scientific community. According to the SUSU's development strategy, the following digitalization fields were outlined: sensory properties of the digital industry objects, artificial intelligence, digital twins, designing based on 3D model optimization, energy saving and information security. All these technologies are already being actively implemented by the university in joint projects together with its industrial partners. The strategy of developing of this field was presented by Vice-Rector for Digitalization Leonid Sokolinsky:

"Digital industry is among the most actively developing fields in the world science, and of course, we are trying to keep up with the crucial trends. Moreover, our university is located in an industrial region and is collaborating with multiple enterprises, which are facing the task on transiting to digital industry. Therefore, they need help in the form of scientific innovations and research-and-development works. We have important developments both in the field of mathematical modelling, and in the field of creating digital twins, and supercomputer modelling."

"I'm impressed by the work of the university's International Scientific Council. We discussed three key fields of the SUSU's development. First, the digital industry and its significance in modern world. The university is participating in research in this field, and we've listened to many reports on how the university can support the digitalization of industry. Second, we talked about the materials science. The university is well-known around the world for its works on materials science, and we discussed the possibilities for future development in this field. And the third field, which O believe, is very important, is the ecology. Today the studies being carried out by SUSU are of interest for the whole world today. We discussed the problems of the shortage of water, and of air pollution. Over a short period of time SUSU has significantly progressed in studying these fields, and some of the projects can be commercialized."

South Ural State University presented the International Scientific Council the results of work by eight unique laboratories, headed by the leading scientists from different countries of the world. These laboratories are solving most relevant tasks in developing the digital industry technologies, studying the migration processes, food industry, stress mechanisms, improving the properties of materials, and in other promising fields of science.

In 2019, South Ural State University filed applications for opening four more scientific laboratories, specializing in materials science, mathematics, chemistry and sports. Within the ISC the projects were presented, the teams shared on the plans, development strategies and scientific fields for these laboratories.

The members of the International Scientific Council were unanimous that it is possible to fulfill all the presented projects, provided the programs are somewhat corrected with consideration to the voiced recommendations.

SUSU is becoming not only a big educational centre in our country, but it also is greatly contributing to science and economics of Russia. The guests of the forum saw the progress and were impressed by the results of the work being done. The world's leading scientists expressed their readiness to further facilitate the active development of the university.

"The university is open for collaboration. The members of the International Scientific Council are ready to further encourage and support SUSU's development in the priority strategic fields: digital industry, materials science and ecology," summarized Michael Train.

To close the forum, SUSU Rector Aleksandr Shestakov thanked the members of the International Council for active work and stressed that all the discussions were very helpful:

"We have heard about many interesting ideas, learned about the practices of other universities, not only in science, but also with regard to businesses in the field of high technologies. The information that we have obtained will be thoroughly analyzed and discussed at an extended meeting of the University Council. So, in the further activity of our university you will be able to see the results of your work. SUSU will keep improving its work, and for that we will largely give credit to you."

Over the three years of participating in the national program Project 5-100, SUSU has accomplished a lot. The results are visible in all the fields of the university's strategic development, and new significant steps are waiting ahead.

"We just have to be leaders in the field of digital industry in Russia," commented Aleksandr Shestakov. "We are fruitfully collaborating with the world's ideologists of this field: with Emerson corporation - with regard to industrial enterprises, and with Siemens Group - in what concerns the development of a new technology of designing. We have modern software products. We created a Siemens Centre for the purposes of engineering the machinery based of the company's advanced software. We are cooperating with big industrial partners operating in the global market. First and foremost, of course, this is Magnitogorsk Iron & Steel Works. Ecology and Materials Science are relevant topics for our region. And here we also have achieved good results. I am confident that if SUSU focuses on reaching its goals in these fields, it will manage to become one of the best universities in Russia."