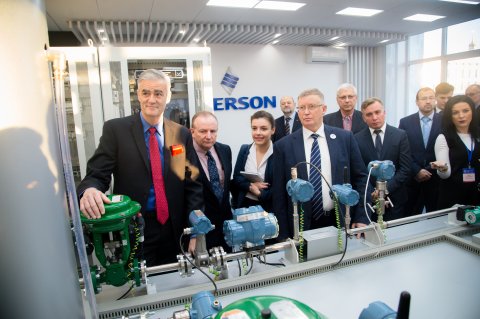 May 31st through June 1st, a meeting of the International Scientific Council (ISC) is to take place at South Ural State University. Leading scientists from different countries as well as executives of the largest companies are going to discuss SUSU’s development in the frameworks of Project 5-100, the programme targeted at enhancement of competitive ability of Russian higher education institutions in the global research-and-education space.

International Scientific Council has been established at SUSU in order to coordinate research and educational activity of the university in compliance with the world’s best experiences. Within a face-to-face meeting, the university will be visited in person by the new Chairman of the Council, President of Emerson transnational Corporation, Michael Train, and Director General of SMS-group Inc., Pino Tese. The official meeting will also feature Professor of the University of Melbourne, Doctor Ashokkumar Muthupandian, and Professor of the Korea Institute for Advanced Study, Doctor Jaewan Kim. Recommendations of the Council will be used for further development of the university.

May 31, on the first day of the International Scientific Council operation, the experts will be introduced to the new strategy of SUSU’s development in three directions: Digital Industry, Materials Science and Ecology. Besides, a press-conference entitled “The main achievements and dynamics of international development of the university” featuring the Rector Aleksandr Shestakov, ISC members and mass media representatives is to be held.

On the 1st of June, the ISC members will discuss the results of operation of eight international research laboratories for the period of 2017-2018. The Self-Validating Sensors, Systems, and Advanced Instrumentation Laboratory is operating under supervision of Professor from the University of Oxford, Manus Henry. Its purpose is researching theoretical fundamentals of creation of intelligent devices and producing their prototype models with the use of advanced technologies of the Internet of Things. Researchers are solving the problem on development of sensors and control elements which not only can perform certain functions but are also able to carry out diagnostics and correction of their own state.

The International Laboratory of Problem-Oriented Cloud Computing Environments is headed by Professor of the Centre for Scientific Research and Higher Education at Ensenada (Mexico), Andrei Tchernykh. Researchers of the Laboratory carry out breakthrough research in the sphere of distributed computing and cloud technologies.

Within the Laboratory of Mechanics, Laser Processes and Digital Production Technologies, supervised by Professor of the National Engineering School of Saint-Étienne (France) Philippe Bertrand, work is being carried out in such directions as creation of multi-functional and gradient surfaces using the method of laser cladding; laser synthesis – growing-up – of volumetric items; development of research works; professional training of academic and engineering cadres, etc.

The Molecular Electronics Laboratory, supervised by a SUSU scientist, Candidate of Sciences (Physics and Mathematics) Fedor Podgornov, allows carrying out research in the sphere of creation of eco-friendly flexible solar batteries and molecular components of electronic devices.

The purpose of the International Laboratory for Migration Studies, which is headed by Professor Jeffery Sahadeo from Carleton University in Canada, is to create a scientific-and-research cluster for studying migrations. Researchers of the Laboratory name the following research directions as the prospective ones: archaeology of transit zones of Eurasia, problems of social and cultural changes of Eurasia in the epoch of the Late Middle Ages and the Modern Age, migration processes in the epoch of modernity, and contemporary migration processes.

Operation of the Multiscale Modelling of Polyfunctional Compounds Laboratory headed by Artem Masunov, a Professor at the University of Central Florida, is targeted at fundamental research in the sphere of the structure and properties of chemical compounds. Researchers are studying the ways to influence the atomic-and-molecular structure of a substance in order to obtain the necessary physical and chemical characteristics, which would be able to provide useful properties of materials. They also aspire to using advanced technologies in their research activity.

Research group of the Synthesis and Analysis of Food Ingredients International Laboratory (its Head is Professor from the National Institute of Technology in India, Shirish Sonawane) is elaborating principles and techniques allowing to single out biologically active substances with the use of ultrasound, and is working on modification of their properties in order to enhance their functionality.

The goal of the Neurohepatology Laboratory is to acquire new knowledge regarding the role of the liver in regulation of the central neural system’s operation in its normal state as well as under the conditions of a chronic stress and during diseases which are caused by the stress and reduce the life expectancy. The work is being done under the leadership of Director of the Institute of Molecular Physiology and Genetics at Slovak Academy of Sciences, a well-known scientist in the sphere of neuropharmacology, Eliyahu Dremencov.

Scientists who are members of the International Scientific Council will evaluate accomplishments of research teams of the laboratories as well as prospects of their further development; they will also share their vision of continuation of the research activity, taking into account the global experience.

Programme of the ISC meeting