On May 31, 2019 a press-conference devoted to discussing the development strategy of South Ural State University was held at SUSU. Among the event's participants were representatives of the elite of the world science and industry, members of the International Scientific Council, and in particular: President of Emerson corporation Michael Train and President and General Director of SMS Group, USA, Professor Emeritus of SUSU Pino Tesè.

Emerson company is a global supplier of solutions and manufacturer of equipment in the field of industrial process automation.

SMS Group is one of the oldest industrial companies in Europe. The group comprises a whole number of enterprises manufacturing mechanical engineering equipment and complexes for processing steel and non-ferrous metals. SMS Group is one of the world's leaders in metallurgical mechanical engineering, in manufacturing equipment for pipes, forged products, non-ferrous metals, and heating machinery. 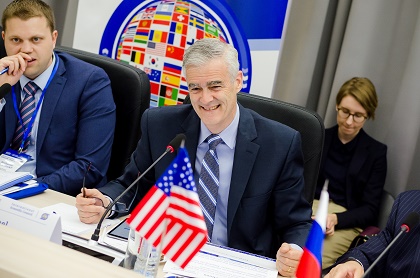 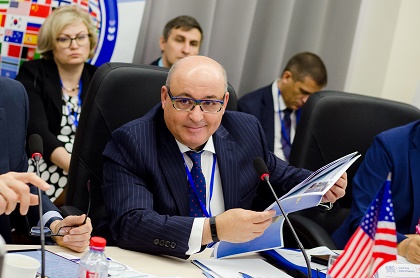 The International Scientific Council was established at SUSU for the purpose of coordinating the university's scientific and research, and educational activity in compliance with the best world practices. Today the university's activity is based on three scientific fields: digital industry, materials science and ecology. These fields allow to create important and relevant collaborations between scientists across the world, and thus, develop science and improve the university's standing.

The main results of work over the recent years were summarized at the conference, and the paths for further development were outlined. In particular, the Council members discussed the SUSU's potential on entering the leading groups of the world's universities with regard to developing digital industry, creating new materials, as well as engineering the best available ecology-related technologies.

The university Rector Aleksandr Shestakov shared on the SUSU's projects being fulfilled jointly with big international corporations — Emerson and SMS Group, which have given impressive results today.

"Over the 15 years of closely collaborating with Emerson we have fulfilled more than 20 scientific projects," noted Aleksandr Shestakov. "Today we have started a new project on sensory engineering in industry, which promises good results. Moreover, within the frameworks of our collaboration with Emerson company we have developed a programme for Russian Bachelor's and Master's students, which has a special status in the Russian Federation. As a national research university, we are entitled to implement academic programmes of a higher level than the recommended federal programmes. And I believe, it is very important for the development of education in our university." "Jointly with SUSU, we're conducting important research in the field of industry, supporting and improving the training programmes, and creating laboratories," shared Michael Train. "All members of the International Scientific Council are not just prominent figures of scientific activity, but they also deal with practical work, and namely this combination is very important. We're inspired by the progress and successes we've achieved, and I'm sure, our dialogue and partnership will continue."

Ten years ago, it was namely Emerson corporation that opened at SUSU a laboratory on modern methods of automation of all the existing systems back then, and which became known to the whole world. Today, when the university undergoes a new stage of development within digital industry, a new laboratory was opened jointly with Emerson, and advanced equipment was installed. In the nearest future the partners are planning on launching new educational programmes and further development of the laboratory for a deeper understanding of the problems of digital industry.

"Today, the whole is switching to digital technologies, but we came to understand the need for it already back in the year 2000, when we purchased the first supercomputer. Thanks to the timely development, today our university is among the leading ones in Russia with regard to supercomputers, what helps us train qualified personnel in the field of information technologies and mathematics," added Aleksandr Shestakov. "The digital industry field is among the crucial ones in modern world since the enterprises, which use new technologies, become more competitive." 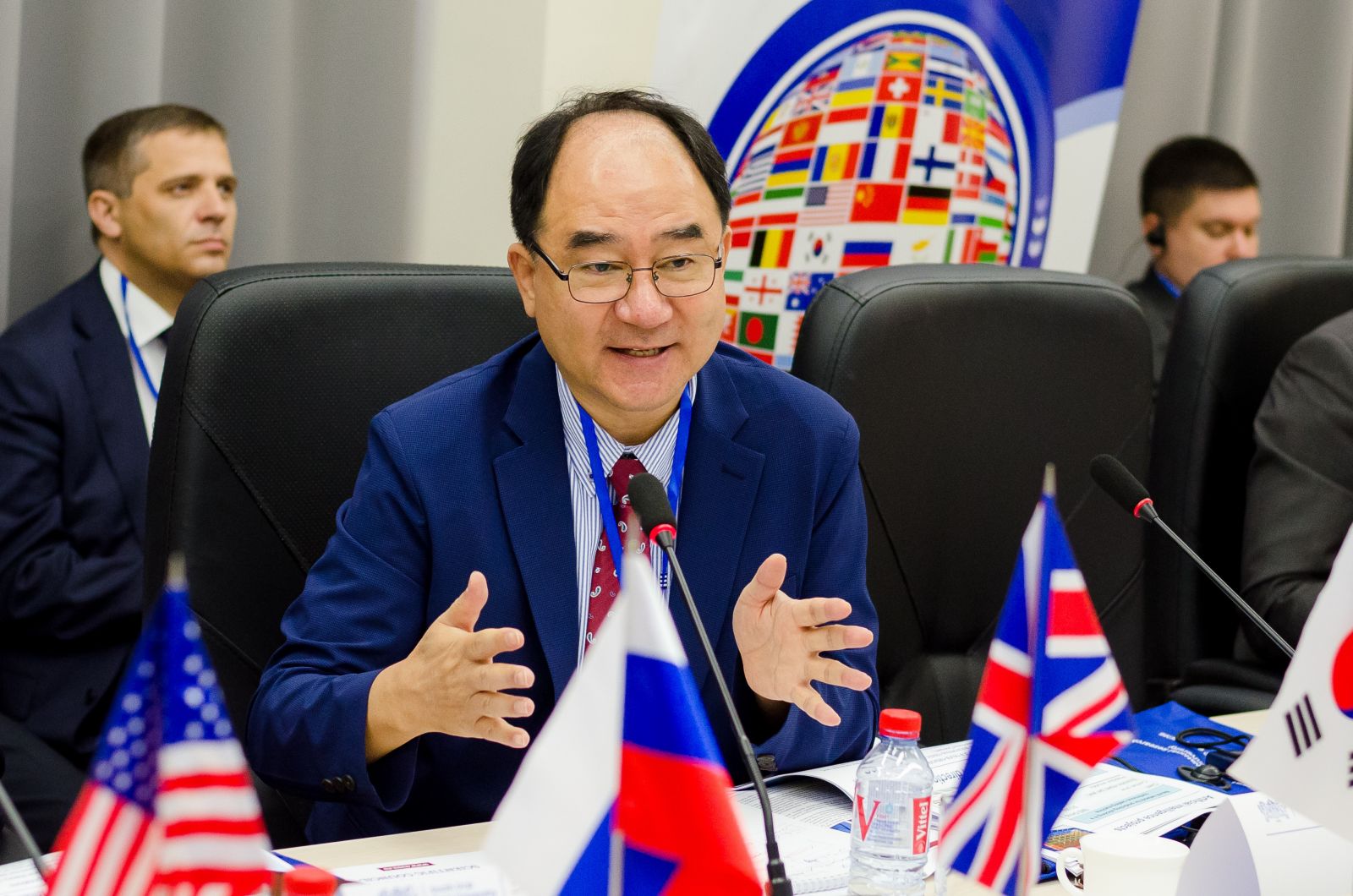 Over the recent ten years, strategically important projects were also fulfilled by the university jointly with SMS Group corporation. According to General Director of SMS Group and Professor Emeritus of SUSU Pino Tesè, today, there is huge potential in the fields of digital engineering, laser beam welding and cladding.

"We're talking about additive technologies, which can be used not only in metallurgy, but in other fields of industry as well," stressed Pino Tesè. "It's very important for both parties since there is a need for these technologies in the whole world. And our strategic goal is to support the scientific-and-research education for the digitalization engineers and specialists."

Another important issue was the development of quantum informatics, which today has significant influence on the trends in the field of digital industry. As the members of the International Scientific Council noted, today the quantum technologies complete the existing digital and nanotechnologies, but they might as well replace these in the future.

"The whole world is inspired by the possibilities, which quantum computers offer — it is these machines that can solve most complex mathematical tasks, which cannot be solved using other means, including by digital supercomputers," noted Professor, Doctor Jaewan Kim. "Quantum communication, including quantum cryptography, provide us with completely new possibilities, which outcompete nanotechnologies, as well as ensure better security in terms of communication privacy."

The scientists also discussed the strategy of the university's development under the Ecology field — one of the crucial fields of the university's development. The relevance of this topics is, first and foremost, explained by the needs of our region: many of the industrial enterprises were built nearby residential areas, which today have found themselves in the zone of hazardous influence of the emissions.

In May of 2018, following the Decree by the President of the Russian Federation Vladimir Putin, a complex of measures on improving the ecological situation was determined. In this context, the university set itself a goal on creating a Russian Federal Centre of the best available ecology-related technologies and competencies. It is planned to find solutions under such blocks as: Clear Air; Clean Water; Developing a Technology for Solid Waste Recycling; Environmental Law; and Humanitarian Eco-Engineering. Active work is being done in each of the directions, and various departments of the university get involved. In particular, today the university is modelling the ecological situation and is rendering assistance in setting the tasks and adapting scientific solutions to practical use. Further on, the researchers will be promoting ideas on creating a laboratory, jointly with Emerson company, for development of new applications for ecology.

The International Scientific Council plays a very important role in the development of the SUSU's international activities. It comprises representatives of different countries and professions, most prominent specialists in their fields, who set up the dynamics for the development. And today the university indeed has a lot to be proud of. In 2018, SUSU was first listed in the global leading ranking of the world's top universities, according to British consulting company Quacquarelli Symonds (QS); as well as in the world subject ranking on engineering sciences, as per the international ranking agency Round University Ranking (RUR Ranking). This year, the international ranking agency Times Higher Education has published the results of THE Impact Ranking 2019 for the first time, and SUSU took its rightful place in it as well.