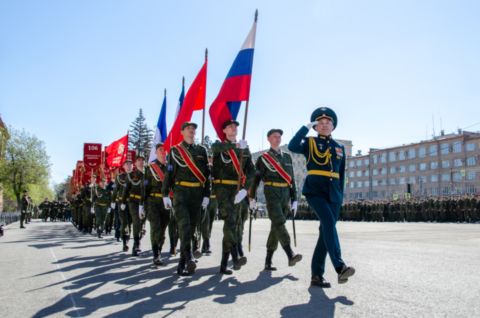 “This is a holiday with gray hair on its temples, it is joy with tears in your eyes...”. Students of the Military Training Centre of South Ural State University are among the first to celebrate Victory in the Chelyabinsk region. Traditionally, a parade is held on the square in front of SUSU on May 7th.

"The Rector of SUSU Aleksandr Shestakov congratulates us, and then we march to the Eternal Flame to lay flowers and wreaths,” says Deputy Head of SUSU Military Training Centre, Candidate of Sciences (Pedagogy), Colonel Konstantin Krikunov.“Today 850 people march in the square. This is a little more than a half of the student body of the SUSU Military Training Centre”. In orderly rows, the students of the Military Training Centre march through the city centre to the Eternal Flame. Among the students is Ivan Ryazanov.

“Today's event for me is filled with deep meaning. I feel obligated to be here to remember the heroism of my ancestors because my great-grandmother and two great-grandfathers fought at the front during the Great Patriotic War. I will honour and remember their history and the sacrifice they made for our lives,” says Ivan.

The series of commemorative events ends with the brightest, most spectacular and touching event—the Victory Waltz. This dancing flash mob (which is dedicated this year to the 76th anniversary of the Great Victory) has also become a good tradition for the university. And this year the Victory Waltz - the waltz of gratitude - is being performed for the sixth time by SUSU student. 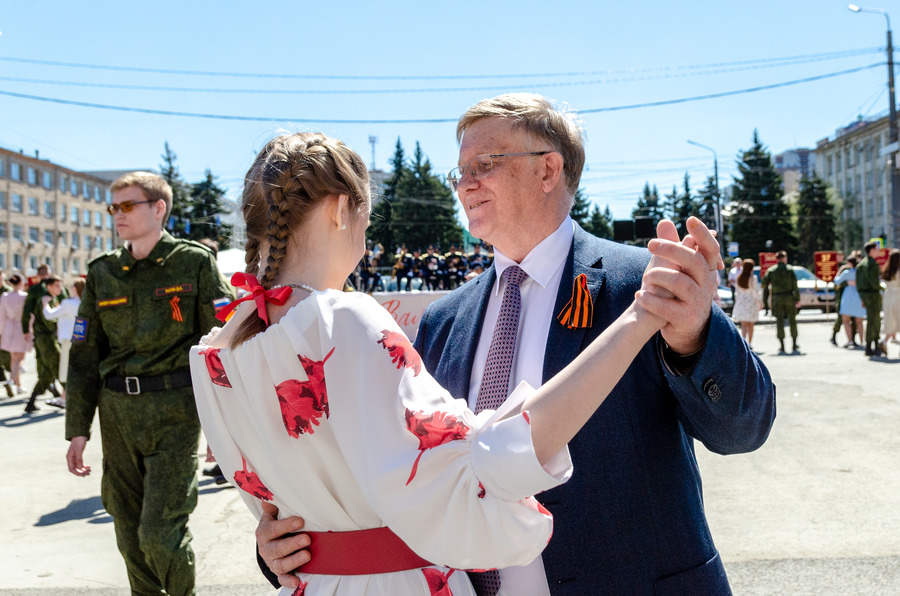 “Victory Day is one of the most important holidays in our country. Victory Day is memory, it is pride, it is the history of our country,” said SUSU Rector Aleksandr Shestakov, opening the event. “With each year the Victory Waltz on the square in front of South Ural State University gathers more and more participants—students and young people. Back in ‘41 when the war started, there were many young people who were called upon to go to war. Those were young people who didn't complete their studies at universities, who didn't live to see the Great Victory...".

According to Aleksandr Shestakov, the Victory Waltz is in memory of those young people who laid down their heads on the battlefield, in gratitude to them. This event helps the young generation become participants of those terrible events, to remember the deeds of their grandfathers and fathers.

“For my family, May 9 is a sacred holiday. My grandfather fought at Stalingrad, and his brother commanded a company of fine soldiers at Leningrad. I am deeply grateful to them for their heroism and labour. The Victory is not just a heroic deed, it is hard work. And the young generation should understand that they can achieve something only by hard work. The future is in their hands and depends on how they will use their knowledge gained at university, how they will master their civilian profession and the military education received in the Military Training Centre. The task of the young generation is to be worthy of the Victory won by our ancestors at the cost of their lives," Aleksandr Shestakov emphasized.

The Victory Waltz is rightly one of the largest Victory Day events in the city. The participants perform to live music by the Chelyabinsk Higher Military Aviation Red Banner School of Navigators. This year the composition "You Survived, Soldier" by Tamara Gverdtsiteli was chosen. “The peculiarity of our dance flash mob is that there are no professional dancers, actors in our group—these are students, and in just three weeks they created a grand theatrical performance with us. Yes, it's not just a waltz. We created a whole story. And for these students, this is more than just a dance, because every family was touched by the war", says Tatiana Mueller, director and producer of the dance, graduate of SUSU, and professional choreographer.

Where the first Victory Waltz included 70 couples, in 2021 the number rose to 180. And according to Tatiana's calculations, there were about 200 couples on the square, because no one is turned away here. The most important factors are desire and responsibility: it was necessary to attend daily rehearsals. By the way, many of the students are real couples. Tatiana says that over the six years of the project, two children have been born in families who met to dance the waltz and say thank you to the veterans for the Great Victory. 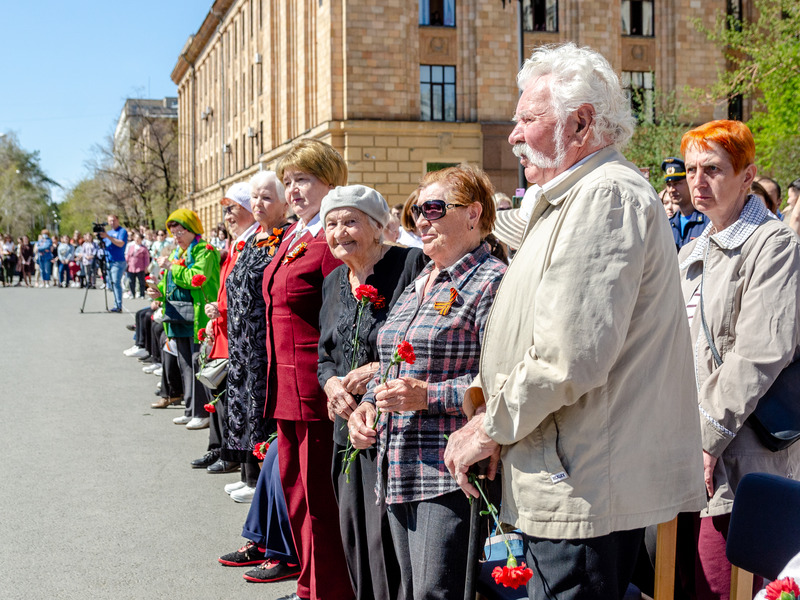 “Some students were unenthusiastic about the task, but not me. I had never danced a waltz, and I was interested in learning new things,” says Dmitry. “Although rehearsals were held every day for three hours, and I live in Kopeysk, and I had to travel from home and back every time for a long time.”

Dmitry met his dance partner Anna Shpyrkova at the first rehearsal. He saw her and realized he wanted to dance with her. Like a real military man, he boldly and bravely approached her and asked her to join him as his dance partner. The girl did not refuse.

“I saw an ad for couples to participate in the Victory Waltz. Just recently I danced the waltz at graduation, I liked it very much, and I was happy to start rehearsing. Although I admit that it was difficult, Dima and I saw progress every day, and that motivated me to continue practicing. Today we are a little nervous, but also very much looking forward to the performance,” says Anna. “Yes, I have some anxiety, because the event is very important: it is not just a dance, but the Victory Waltz, dedicated to our fathers and grandfathers—the victors,” notes Dmitry Pivovarov.

Victory Day is a holiday that connects generations. And today Nadezhda Kuzmina, the Chairman of SUSU Veterans Council, takes part in the Victory Waltz on the square.

“We represent the older generation, and next to us are our little copies - representatives of the future,” Nadezhda Dmitriyevna says about her role in the project. “Such commemorative events are important for the younger generation because they teach us to remember… to remember the feat of heroes, to remember our history. They unite us, and young people begin to have more respect for the past.”

Nadezhda Kuzmina also noted the exhibitions currently being held at SUSU. The main University building in the third floor hall is hosting exhibitions entitled “The History of the Great Victory” and “The Immortal Regiment of SUSU”. The first is a traditional exposition telling about Tankograd's contribution to the Great Victory. But the exhibition "Immortal Regiment of SUSU" is being demonstrated to visitors for the first time. The exhibition includes 211 names of university employees that took part in the Great Patriotic War. The "No Statute of Limitations" exposition was opened in the lobby of the University Scientific Library on the first floor of Building 3D. The exhibition was organized as part of a federal project with the same name to preserve the historical memory of the victims of Nazi war crimes and their accomplices during the Great Patriotic War. “It would be very useful for students to visit all these exhibitions, maybe someone will find their relatives and restore the connection between generations, the history of the family,” said Nadezhda Kuzmina.

The celebrations at SUSU don't end here. Traditionally, SUSU students take part in the Victory Parade on Revolution Square on May 9th. This year will be no exception. The column of the largest university in the South Ural region will be headed by the head of the Military Training Centre, colonel Nikolai Karpov.

The SUSU Military Training Centre is the only such centre in the region and one of 93 in the Russian Federation.

The Military Training Centre offers its students a number of unique opportunities. Students of the faculty master their civilian profession alongside their military specialization. Upon completing their university studies successfully, students receive the military title of lieutenant, sergeant, or private and are enrolled in the reserves of the Armed Forces of the Russian Federation without military service. The quality of military training at SUSU is no worse than that which is offered at military schools. All of the lecturers of the centre have many years of military experience. The Centre has unique training facilities, some of the best among the military training centres of the Russian Federation.