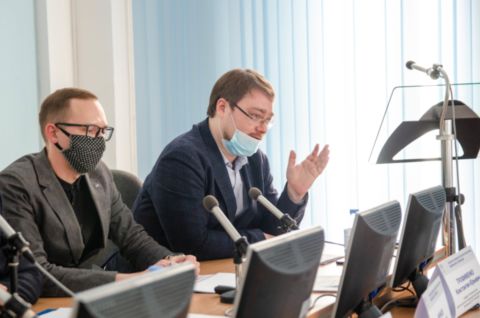 On December 13th, a briefing was held at South Ural State University, during which a SUSU research project on the creation of a comfortable and safe modern public transport system was presented. Its main goal is to create additional amenities for passengers and increase the traffic speed within Chelyabinsk, including the Kopeysk Urban District and the Sosnovsky Municipal District.

Despite the formal completion of the project, which resulted in the development of four basic documents, which are planned to be adopted by the end of the year, work on optimizing some decisions is still underway.

How will the changes affect the fare? Will the public transport arrive faster, and what steps will be taken to innovate the current transport system?

These and other questions were answered by one of the authors of the project, Kirill Miachkov.

The methods you listed are not gentle, but they are not radical either. How do you plan to implement all these improvements in the public transport system of the city and districts?

For the smoothest transition to the new public transport system, a step-by-step implementation of changes is provided for. The implementation of preparatory infrastructural measures is proposed to be carried out already in 2021, and the main changes in the route network will be made in a phased approach during 2022. This will prevent from a one-step "shock" transition to the new system, which is a favourable factor for both passengers and carriers.

What did the residents of Chelyabinsk say about the project on the improvement of transport network?

To take into account the residents' feedback, public opinions and wishes were recorded during the official posting of the project on an open source website, where everyone could get acquainted with it. Through various channels, both through the Ministry of Road Facilities and Transport and the expert community, more than 300 comments were received, which were thereafter reviewed and analyzed. Having considered the comments, more than half of them were fully or partially taken into account.

Can we say that the proposed measures will reduce the travel time? And if this is true, how much faster can we get from point A to point B?

Implementation of the proposed measures to increase the speed of public transport traffic (separation of tram lines, adaptive control of the set of coordinated traffic lights, organization of priority lanes) will reduce the average travel time within Chelyabinsk by 6%, which all in all gives a significant time saving effect for route network users.

The project implies an increase in the cost of a one-ride pass. Will the fare change? Can we say that it will be more profitable to purchase a farecard than to pay for the ride in cash every time?

Increasing the cost of a one-ride pass paid in cash, when passengers do not use their farecards, is a common practice in cities and metropolitan areas with progressive transport systems. It aims to stimulate the purchase of farecards, that is 30-day, 90-day, or 180-day unlimited-ride passes. Since the bulk of the users of the public transport network are regular passengers, the reduction in the cost of the farecards is an obvious advantage for them. For guests of the city, 1-day, 3-day, or 7-day farecards, that also provide favourable conditions in comparison with one-ride passes for cash, will be available.

Our next question is about comfort during the trip. Are there any plans to upgrade and expand the bus fleet?

During 2019-2020, the carrier companies of Chelyabinsk purchased about 40-50 medium-sized buses (both new and used ones). According to the proposed scheme, the expansion of both the large-sized and medium-sized buses will continue. Thus, the number of such buses will increase by 5 times, which is an undoubted signal for participants in the passenger transportation market to continue purchasing such rolling stock.

What about the waiting time? Will the buses come faster?

According to a sociological survey, for 88% of respondents, an acceptable average waiting time for a vehicle at stops is from 3 to 8 minutes. In the proposed scheme, the time spent on waiting will be comfortable due to the high traffic frequency along the main-line routes. So, for example, today the bus No. 2 "Mekhkolonna - SUSU" runs once every 25 minutes. In the proposed scheme, its traffic frequency will be extended, and now it will run once every 5 minutes even during peak hours. Taking into account the uneven approach of passengers, the average waiting time will be 2.5 minutes, which corresponds to the comfortable waiting time for the passengers.

Will it require to make any changes to the current legislation? How will this affect the participants in the passenger transportation market?

The work in the new system will be carried out under the current Russian legislation, which clearly regulates the "rules of the game". This includes Federal Laws No. 220-ФЗ "On the Organization of Regular Transportation" and No. 44-ФЗ "On the Contractual System in Procurement." Also, carrier companies can study the practices of joint work of carriers with authorized bodies on the system of gross contracts in regions with advanced transport systems.

How was the concept scheme of new lanes and roads developed?

Their implementation is a common practice used in many cities of Russia, and the approval in this case is a necessary, but a technical matter.

In connection with the gradual replacement of public minibus taxis, will the drivers be provided with employment?

The profession of a public transport driver will become much more in demand for the Chelyabinsk agglomeration, as the number of large-sized buses, the crews of which must be staffed, is increasing. And the experience of other Russian cities, that have embarked on the path of transport reform, demonstrates this. In addition, there is already a shortage of personnel for electric transport, and with respect to the given vector of its development, the demand for them will also increase. This opens up wide opportunities not only to find a job, but also to receive social guarantees from the employer that are entitled by law, in which public transport workers are undoubtedly interested.

How will the issue with minibuses be solved? Will their number be reduced in our city?

Yes, the number of minibuses is decreasing significantly. At the same time, they are being replaced by modern comfortable trams, as well as large-sized and medium-sized buses.

When, according to this project, is it planned to merge the public transport of Kopeysk into the Chelyabinsk agglomeration?

At the beginning of 2022; it will be one of the first stages of the transport reform.

How, according to the transport scheme, will the conjunctural changes in the public transport market be taken into account?

Since now the transport scheme will be built using a computerized transport model, work on its updating, with respect to the changes taking place in the city, should be carried out on a regular basis. This is a new dawn for transport planning in Chelyabinsk, consistent with the experience of cities with advanced transport systems.

Regular entry of new data into the model, calculation of the results of various management decisions will allow taking into account the conjunctural changes of all factors affecting the operation of the transport system.

Leading experts in the field worked on the development of a comfortable, safe and modern public transport system. In addition, residents of the city were directly involved in the creation of the project. As part of the preparation, feedback was received from residents of the city and the region, who, in a survey format, expressed their wishes on improving the city's transport system.