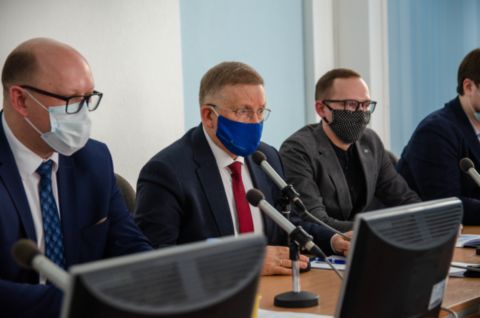 A briefing was held at South Ural State University, during which a SUSU research project was presented on creating a comfortable and safe modern public transport system by 2030. Its main tasks are improving the convenience and increasing the speed of movement within Chelyabinsk, as well as in the Kopeysk Urban District and the Sosnovsky Municipal District.

The Minister of Road Facilities and Transport of the Chelyabinsk Region Aleksey Nechaev was the first speaker at the briefing. According to Aleksey Nechaev, in 2020 a state contract has been signed to develop a transport strategy for the Chelyabinsk agglomeration. A colossal work has been done at SUSU, and a need to discuss it arose. Four basic documents have been developed, which are planned to be adopted by the end of this year.

“For the first time in the Chelyabinsk Region, a systematic and big-scale work has been carried out related to transport. Our university has taken it on with a responsible attitude,” comments the SUSU Rector, Doctor of Sciences (Engineering), Professor Aleksandr Shestakov. “We understand the importance of this project for Chelyabinsk and the Chelyabinsk Region. The team who attended the briefing is by far the best in our country.

We have consolidated the scientific potential of the SUSU Faculty of Automotive Engineering, and also attracted the best Russian specialists to work on the project. They are Konstantin Trofimenko, Director of the Centre for Research on Transport Problems in Megalopolises of the HSE University, and Aleksey Levashev, Associate Professor of the Department of Automobile Transport of Irkutsk National Research Technical University. To implement the project, we have purchased the most advanced software available in the world today.

The work is close to its completion, but the model is alive. We have been discussing it publicly for the fourth day in a row, continuing to include new proposals in it and supplementing the results obtained. I would like to thank the specialists and all the concerned residents of Chelyabinsk. Everything will be taken into account, and I am sure that this will allow us to come to a new transport system, which will be significantly better than the one we have now."

According to Aleksandr Shestakov, on the one hand, the project by South Ural State University will make the transport network of Chelyabinsk more optimal, and on the other hand, it is focused on meeting the requirements of federal programs. The work done will make it possible to integrate into national transport development projects and attract federal funds, as well as funds from the regional budget.

What will happen to the route buses? Will there be an underground railway in Chelyabinsk? The journalists have received the answers from specialists to these and many other questions. The briefing was attended by the representatives of over twenty mass media.