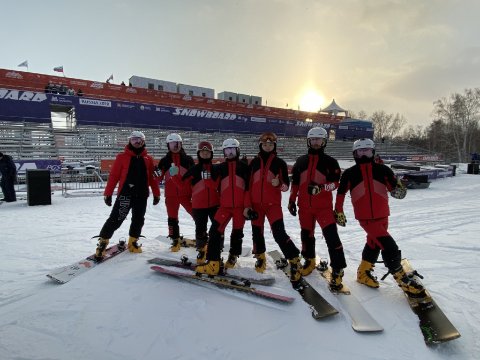 The FIS Snowboard World Cup was held in the Metallurg-Magnitogorsk ski centre on the Bannoe Lake. Student of the South Ural State University Yingyan He, an employee of the International Office, and volunteer Viktoriia Pentegova took part in the event as volunteers.

Participants in the competitions of the FIS Snowboard World Cup round included 166 athletes from 17 countries. A movable 3,300-seat stadium was built specially for the World Cup, where an 11-meter screen was installed to monitor the progress of the competition live. SUSU student Yingyan He was invited to help a snowboarding team from China (18 people). She spoke about her experience as a volunteer in such big-scale competitions:

"It was the first time I participated in such an event as a volunteer in Russia, and I really liked it. I worked with a team from China. It was difficult for me because of the language barrier, there were difficulties in the process of translation from Russian into Chinese. A lot of information was received, sometimes I didn’t even have time to look up the translation, and the information was already changing. In addition, I have never snowboarded or seen snowboarding before, because there is no snow in my hometown, and therefore the terminology was difficult for me."

The tasks of an accompanying attache (volunteer) included solving everyday problems of the team and facilitating communication between the team and organizers of the competition. For example, there was a difficulty in paying upon arrival, as guests from China had only cash, and the volunteer’s task was to find where to exchange the money. In addition, other little troubles constantly appeared, such as lost keys, forgotten things, etc. Yingyan said that she spent a lot of time with the athletes, explained where to go, reported on future plans, or just kept company to them.

"At the competition I liked the people, they were very kind to me, they knew that I was a foreigner and helped me. I met with state athletes, they turned out to be very good people, so I made new friends. My Russian has become better, especially my speaking skills. I plan to continue volunteering and learn how to snowboard while I'm in Russia," added Yingyan He.