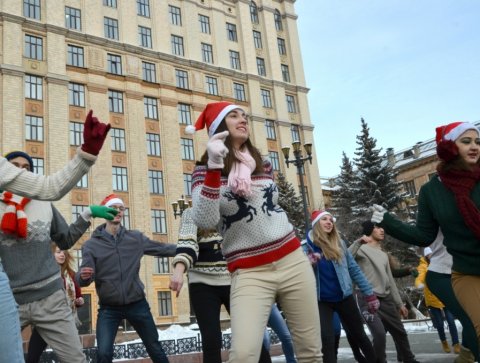 On December 14, a massive flashmob in which participated students of various specialties and years of study was held on the ground of South Ural State University.

For many people dancing is more than just a hobby. It is their way of living, a method of self-development and self-improvement. Dancing is considered a very popular kind of activity as it unites people and allows each person to uncover his or her talents. Based on this fact, SUSU students organized dance flashmob right on the square in front of the Main academic building.

Aleksandr Gaev, organizer of the event, is a second-year student of the Schoolof Economics and Management. Together with a choreographer, they prepared the massive flashmob.

“The project started on November 3. We prepared a venue so that participants would feel comfortable, and we held about 10 rehearsals with young people who can dance already. Today about 30-40 people took part in the event and it’s a good thing, because many students couldn’t come because of classes. We put our souls in this event, because for me personally dancing is the most important thing.”

Choreographer of the event was a second-year student of the Institute of Sport, Tourism and Service Karolina Atabadze.

“Sasha Gaev and I had an idea to launch a project which would be something like SUSU Talent show but in the sphere of dancing. So we organized the flashmob as an opening of this project. Now we are forming a team of dancers with whom we will go to the Student Spring Festival, but so far it’s a secret!”

Vera Ischenko, a freshman student of the Polytechnic Institute was a participant of the flashmob. It was the first time she took part in such event, therefore she noticed the interesting way to organize the project.

“When I discovered that I can take part in the project, I found this to be a good idea because it is interesting and I hoped to find new friends. I used to be a dancer, so I didn’t want to miss the opportunity to take part in the new format of dancing, a more massive one. I think everything was awesome! The atmosphere and emotions were incredible. What is important, even the people who never danced in a team found themselves completely submerged to the atmosphere.” 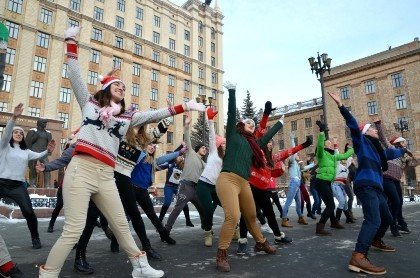 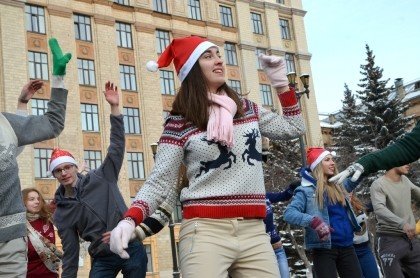