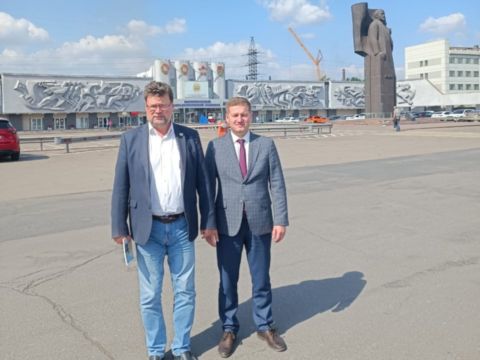 A meeting between the leadership of SUSU and the Magnitogorsk Iron & Steel Works took place in Magnitogorsk on August 23rd. During the course of the meeting a possible partnership between the major South Ural university and its industrial partner in the field of quantum technologies was discussed.

In the modern information society, there is a large and constantly growing number of information resources that require reliable methods of protection against unauthorized access. South Ural State University proposed an option of developing a secure quantum network, which will be created at SUSU and subsequently transferred to Magnitogorsk Iron & Steel Works (MMK).

“For the first time we have won one of the most prestigious contests within the framework of the Decree of the Government of the Russian Federation No. 220, and a world-class laboratory has been created at our university under the leadership of Sergey Kulik, a leading scientist in the field of quantum research at Lomonosov Moscow State University. The research will be conducted within the framework of the Smart Manufacturing strategic project under the Priority 2030 program. This field of study has become interesting for our strategic partner of MMK from a practical point of view. At the meeting with the General Director Pavel Shilyaev and his team, the first discussion of the possibility of applying quantum technologies at a metallurgical enterprise was held. We are very grateful to the leadership of MMK for the opportunity to speak on and outline a plan for further actions in this direction. Practical tasks, in which we can usefully apply our unique competencies, are of importance to us,” noted the SUSU Acting Rector Alexander Wagner.

Besides the SUSU Acting Rector Alexander Wagner the meeting was also attended by the SUSU President Aleksandr Shestakov, Vice-Rector for Science Anton Korzhov, as well as the Head of the Quantum Engineering of Light unique world-class experimental laboratory, Professor of the Department of Quantum Electronics of Lomonosov Moscow State University Sergey Kulik and Professor of the SUSU Department of Nanoscale Systems Physics Sergey Podoshvedov. On behalf of Magnitogorsk Iron & Steel Works, General Director Pavel Shilyaev and heads of the departments of the plant responsible for information security and data transmission were present.

“We decided to limit our proposal to only quantum communications, since this direction is not yet included in the work on the Engineering the States of Light for Quantum Computing and Sensors mega grant. Thus, we plan to include such a subtechnology of quantum technologies as quantum communication in the circle of interests of the new laboratory. It is the first project in Russia of this kind, which considers the interests of such a large industrial company as MMK and combines elements of deep innovation,” shared Sergey Kulik.

Representatives of Magnitogorsk Iron & Steel Works expressed their enthusiasm in the development of the project since the relevance and scale of the problems associated with ensuring information security is increasing every day, and the development of quantum technologies in the near future will help create the necessary innovative products. It was decided to organize a series of seminars on quantum communications in the format of videoconferencing for employees of the plant and the university.

A similar meeting at the Russian Federal Nuclear Centre – VNIITF (Zababakhin All-Russian Scientific Research Institute of Technical Physics), one of the key enterprises of the State Atomic Energy Corporation ROSATOM, took place in the city of Snezhinsk on August 24th. An agreement on the participation of employees of the university in a series of seminars was also reached with the leadership of the enterprise.

South Ural State University participated in a prestigious competition and received a mega grant in the amount of 90 million roubles from the Government of the Russian Federation for three years, for the Engineering of Light States for Quantum Computing and Sensors project. The grant will be used to open a new world-class laboratory for research in the field of quantum technologies, purchase the latest equipment and provide training of researchers.