SUSU Presented the Results of World-class Projects at Innoprom 2022 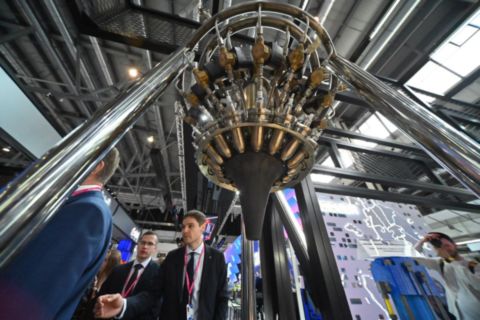 South Ural State University has become a participant of Innoprom 2022, our country’s main industrial exhibition. SUSU has presented world-class projects implemented within the framework of the Ural Research and Education Centre on the Chelyabinsk Region stand and developments within the framework of strategic projects under the Priority 2030 program on its own one.

The Innoprom 2022 exhibition was held in Yekaterinburg with official delegations from 79 Russian regions participating in it. It was attended by representatives of 51 countries of the world. The events of the exhibition were organised with the participation of the Prime Minister of the Russian Federation Mikhail Mishustin, the Head of the Ministry of Industry and Trade Denis Manturov and other high-ranking leaders. Over 36000 people visited the exhibition in four days.

“Our developments have been presented at two venues. The first one is the Chelyabinsk Region stand, where the latest developments within the framework of the Ural Interregional Research and Educational Centre are presented. This is a good tool which helps to synchronize areas of common interest among government, business and university, set prospects and focus on possible growth points. Collaboration with the REC allows to determine the prospects that are important for our Ural enterprises, which financially support research work,” said the SUSU Acting Rector Alexander Vagner. 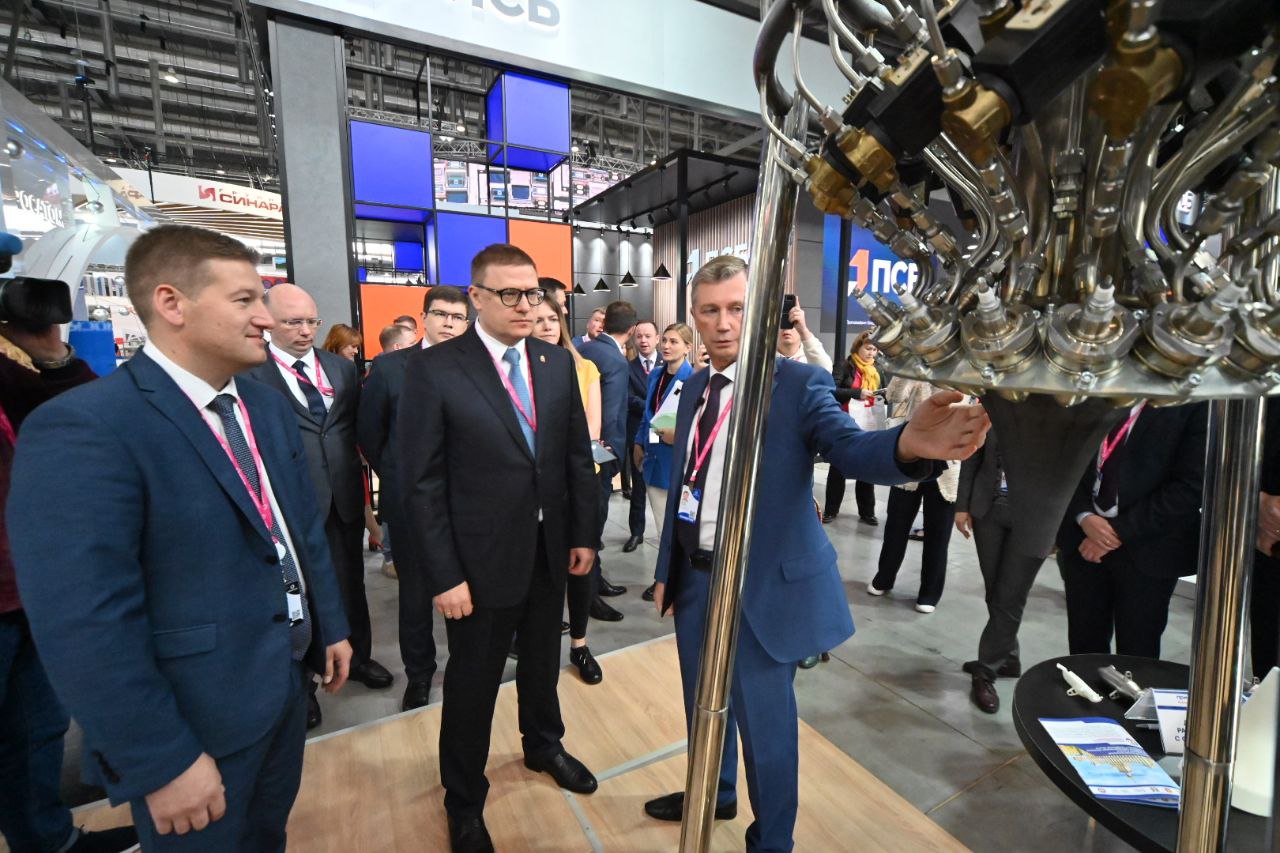 The leading SUSU project of the Ural Interregional Research and Education Centre for Advanced Industrial Technologies and Materials (UIREC) on creating of engine demonstrators for a rocket and space complex with a reusable launch vehicle sparked great interest among the visitors of Innoprom.

“We have brought elements of a propulsion system demonstrator with a central body for the gaseous hydrogen – gaseous oxygen fuel pair, demonstrators of low-thrust engine combustion chambers, which will be arranged in a circle, and a cooled central body made by using additive technologies. Testing of the demonstrator on this fuel pair is planned for autumn,” said SUSU Vice-Rector for Research and Education Centres and Complex Scientific and Engineering Programs Sergey Vaulin.

The project is implemented by the SUSU Aerospace Engineering Research and Education Centre upon the order from the SUSU Advanced Research Foundation with financial support from the Government of the Chelyabinsk Region in the development of advanced engineering competencies.

A layout of an Arctic bus was also presented at the exhibition. The integrated bus project is implemented by SUSU scientists together with colleagues from Bauman Moscow State Technical University, Moscow, with the production support of the Automobile Plant Ural, Miass. The bus will move on dirt roads, off-road and roads covered in snow all year long. In addition, in case of emergencies, a residential module is installed in the transport which is necessary for the full autonomous life support of passengers.

SUSU jointly with Production and Engineering Company "Privodnaya Technika" will continue to use a control system for complex transistorized frequency converters with new control algorithms. This system is designed for precise control of speed and torque in sensorless control systems for valve converters produced in Russia. At Innoprom 2022, an annual meeting of the club of young industrialists with the Minister of Industry and Trade of the Russian Federation Denis Manturov took place, where the most outstanding projects and achievements of the industry were presented. SUSU jointly with the Plant of Modern Insulation Technologies (MIT) are developing an innovative technology for the production of polyurethane without the use of hazardous phosgene and chlorine based on the synthesis of polyamines and cyclocarbonates obtained from vegetable raw materials. The project is implemented within the framework of the Ural Research and Education Centre.

Research fellows of the SUSU Institute of Engineering and Technology jointly with the Ural Engineering Centre are engaged in creating high-tech production of hydraulic drives with hydrostatic guides for making bench equipment which is widely used in the military and civil industries.

“Currently, starting from 2021, within the framework of the Ural Research and Education Centre, the implementation of a project has been launched on improving the design of the hydraulic drive due to the need to equip it with Russian analogues of the feedback sensor and the electro-hydraulic power amplifier. The issue of import substitution of other components of the hydraulic drive, such as an electro-hydraulic power amplifier and a feedback sensor, is being discussed. At the moment, these devices are exclusively of import production. The ongoing improvement of the hydraulic drive design will make it possible to integrate an electro-hydraulic power amplifier and a Russian developed feedback sensor into its composition in the future,” said one of the authors of the development, Professor of the SUSU Department of Automation Engineering Dmitriy Ardashev. 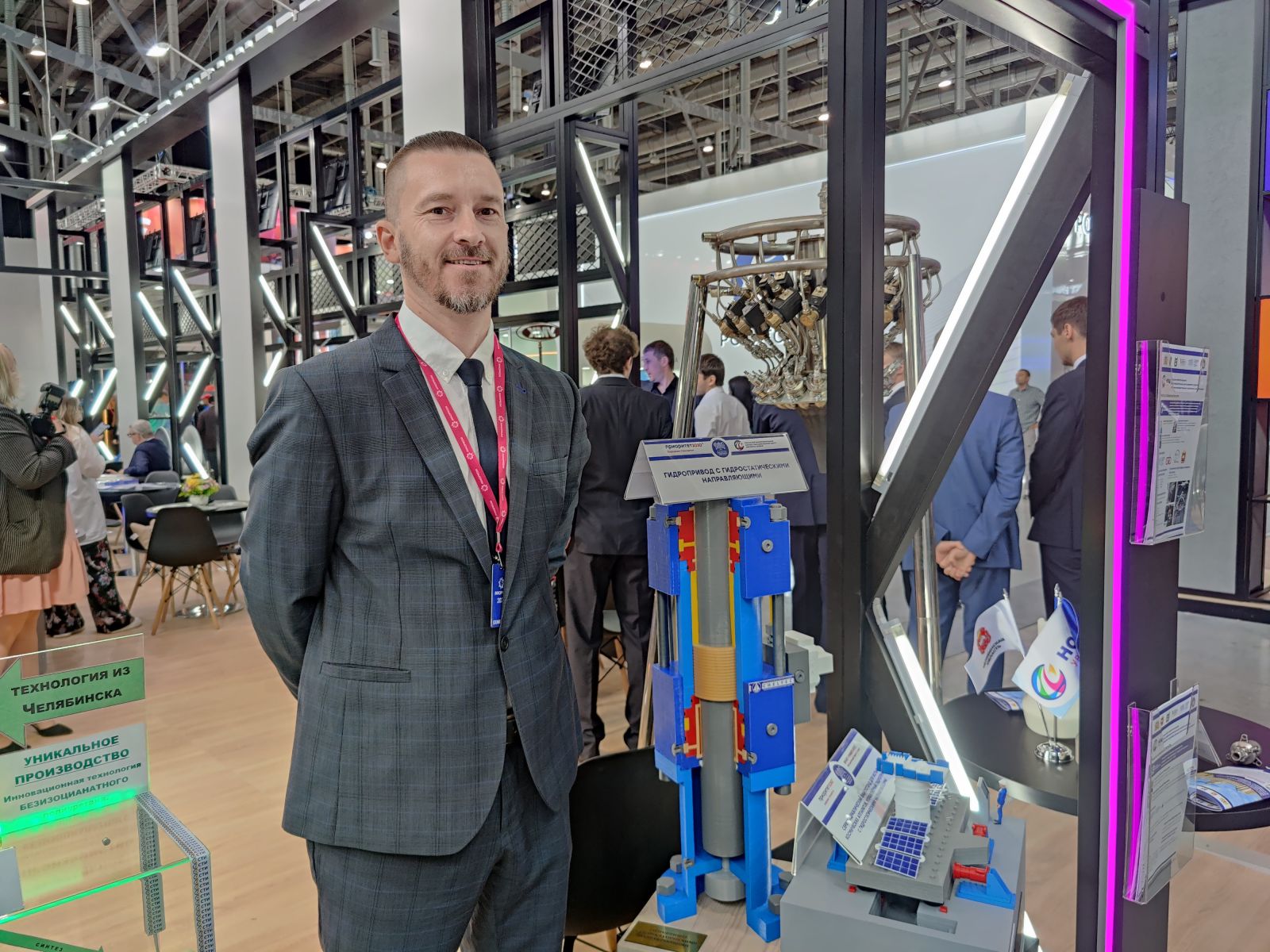 Production of honeycomb structures from prepregs based on glass and basalt fibres by continuous moulding for the automotive and space industries is another promising area of research work for scientists. The project is conducted jointly with OOO M-Profil, Miass. The work is organised within the framework of New Materials of Ural Interregional Research and Education Centre.

At SUSU, a detailed study of the mechanisms and results of growing barium hexaferrite single crystals from melts doped with various elements, as well as the study of phase equilibria and transformations in the process of crystal formation from an oxide melt, is conducted. Such materials have higher levels of electrophysical characteristics, and at the same time, electrophysical parameters can also be tuned due to introduction of various alloying elements.

At the Innoprom 2022 exhibition, samples of applied coatings on structural elements of a main oil pump, samples of joints welded by laser welding, and more were presented. The unique SUSU Laboratory for Mechanics, Laser Processes and Digital Production Technologies provides research work and solves urgent engineering problems in the field of surface engineering using modern additive technologies to ensure the competitiveness of the Russian industry. Proppants for the oil and gas industry

Research fellows of the SUSU Institute of Engineering and Technology presented a technology for proppants production, necessary for drilling wells with subsequent hydraulic fracturing from metallurgical slags.

“Proppants are made from natural raw materials: rocks of a strictly defined mineralogical composition. Large production sites, bulky equipment, multi-stage process, expensive natural raw materials have led to the increase in the cost of proppants, which is reflected in the cost of produced oil. Therefore, the development of technology for the production of proppants in a fundamentally different, less labour-intensive way from alternative cheap raw materials is relevant,” said Galymzhan Adilov, Research Engineer of the SUSU Hydrogen Technologies in Metallurgy Research Laboratory.

Low cost of the new material, combined with high quality that meets regulatory requirements, is a prerequisite for a good competitiveness on the market. Scientists have already determined the technological parameters for obtaining proppants and metal grinding media from metallurgical slags.

There are many industrial cities in Russia, and Chelyabinsk is one of them. Factories and other industrial enterprises often cause air pollution. Scientific staff members of the Institute of Natural Sciences and Mathematics are working on a project on creating a software package for monitoring and predicting the spread of pollutants in the air in real time.

“Our development will help to visualize the current environmental situation online in relation to the geographic map of the area in order to manage the environmental risks of enterprises. We have already developed a mathematical model for the spread of pollutants in the atmospheric air, which formed the basis for the calculation module of the Ecomonitor PC. An algorithm for identifying the parameters of a mathematical model for adaptation to a specific enterprise has been developed. As part of the project, 3 certificates of registration of computer programs have been acquired,” shared the Director of the SUSU Institute of Natural Sciences and Mathematics Alena Zamyshlyaeva. Research fellows of the SUSU School of Medical Biology presented a project on creating a technology for the disinfection of food raw materials and processed products, which involves exposure of treated surfaces to a cold plasma flow.

“Cold plasma provides high efficiency of inactivation of microorganisms at low temperatures (down to -50°C), is characterized by high diffusion capacity, does not destroy the product matrix and is an environmentally friendly method of disinfection. The use of this technology will allow agricultural enterprises to reach a new level of production focusing on the production of safe food products,” explained Artem Malinin, Junior Research Fellow of the Laboratory for Synthesis and Analysis of Food Ingredients.

A project on creating biodegradable materials was also presented. The plates created by SUSU scientists will make it possible to substitute disposable tableware, since such a plate will be decomposed in 4 weeks. In addition, films that can replace plastic bags were presented. They completely decompose without leaving a trace and without harming the environment.

Research in the field of health-saving technologies is conducted at the SUSU Institute of Sport, Tourism and Service. At the moment, there are no effective solutions to the prevention and effective treatment of back pain. However, in recent years, evidence has emerged that much depends on the design of office chairs and armchairs: most of them do not allow a static position to be maintained for a long time.

Scientists conducted a study of the biomechanics of comfortable postures of a person in a sitting position using the XSens motion capture system. They found that in all comfortable positions in an office chair, there is a posterior rotation of the pelvis, which is the determining factor in increasing the load on the lumbar spine and, as a result, changing the position of the thoracic and cervical spine.