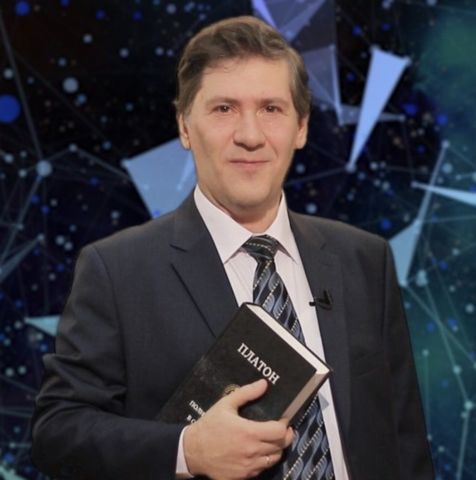 What time is it? We ask this question several times a day. The answer helps us understand whether we are on time or we are late, and we make a whole series of decisions. Sometimes we treasure every minute, and once in a while we waste our time. So, we have a general understanding of this one of the main ways to measure our life more or less. But when we try to dig deeper within this phenomenon, it turns out that…we understand nothing.

What do we know about time, and what will we never learn? Igor Klebanov, Associate Professor and Senior Research Fellow of the Department of System Programming of the SUSU School of Electronic Engineering and Computer Science, Candidate of Sciences (Physics and Mathematics) talks about the phenomenon which influences every aspect of our lives.

Igor Klebanov is an alumnus of ChGPI and author of fundamental papers on nonlinear mathematical physics published in top-ranking scientific journals. He is the author and host of the Zolotoye secheniye (Golden Section) popular-science educational broadcast at SUSU-TV. Igor Klebanov is a polymath, and his hobbies include philosophy, literature, and theatre. He is also an amateur sculptor. He is married and has a son.

- Does the concept of time belong to philosophy or to physics?

- …Saint Augustine, a 4th century philosopher once said: ‘What is time then? If nobody asks me, I know; but if I were desirous to explain it to one that should ask me, plainly I do not know.’ Therefore, one may consider time both from the points of view of physics and of philosophy. And also, of psychology, literary studies, and so on. Sure, physicists have a clearer understanding of time than philosophers do. But the former understand this concept merely as a certain mathematical model called “number scale”. In addition, physicists realize that we can speak about time meaningfully only when we think of some kind of a procedure of measuring. While in philosophy time is already a more blurred concept, and every philosopher can give it a definition of his own.

- So, which definition is better in your opinion?

- The one given by physics, of course, since I’m a theoretical physicist. For me, time is a number scale. Though, I’m well aware of the fact that it does not explain the concept, but rather provides a convenient way to talk about time. We can give endless additional explanations, but will never be able to explain it completely.

- The paradox just proves it: we know so little about this mysterious category. Why is that?

- As creatures, we live in space and time. We can’t step out of it and take a look at it from outside. That is how scientists study any object. Biologists study samples under the microscope, astronomers gaze at the stars, and physicists conduct experiments in laboratories… That is, we must find ourselves beyond the boundaries of the object. But can we jump out of space and time? Science gives a negative answer to that. That is exactly why we know so little about these phenomena and can’t create a detailed picture of them.

- But sill, is time a space or a movement?

- Neither. In physics, space-time is a consistent system, uniform essence. As for movement,.. To describe it, we will actually need a model of space-time.

- But the clock is ticking away…Does this mean movement?

- In this case we talk about a certain process of measuring time, which yet again helps us meaningfully speak about time. What does it mean: ‘clock is ticking away’? This means that sand flows down in an hourglass, or the clock hand moves across the dial… But time as a phenomenon is beyond movement. We simply have a possibility to speak about this phenomenon using certain terms. Otherwise, we wouldn’t have been able to say anything meaningful about time at all.

- If there’s no movement, then is time an invariable?

- You see, no one can say ‘yes’ or ‘no’ to that. We can only contemplate it indirectly, through something.

- And what game does this phenomenon play with us when we cross time zones?

- There’s no mystery here. The Earth’s time zones have been conventionally agreed upon and help people communicate and conduct economic activities rationally.

- But it looks like people in Kamchatka and in Kaliningrad live in different time during one and the same second? Where the time is the correct one?

- Nowhere and everywhere. Let me explain. It's like with the principle of relativity of motion. Imagine that you are travelling by train. You are moving relative of the platform, but you are at rest relative of the carriage. Which state is correct? Each one is correct depending on the observer point.

- So, these are mind games indeed…

- More like a mind's attempt to create some sort of a rational system. It's just that this elaborated system has turned out to be the most convenient one because the Earth is rotating on its axis and also orbits the sun.

Between the past and the future

- Does the past exist?

- This is a philosophical question already. If we speak about the passing of time, then there is only the present. The past has already passed while I've been speaking, but the future has not arrived yet. The past probably exists in the form of certain facts that we keep in our memory, or as artefacts – those objects that the past leaves us with.

- So, there is only this moment in the now?

- There is the "moment when...". But to speak meaningfully about it from the philosophical point of view, we must yet again "jump out" into another dimension. Roughly speaking, we must look at it from above.

- And is there a different dimension somewhere?

- It all depends on the model of the world that we stick to. According to some scientific models, our world has 10 dimensions, or even 11, or 26… But we do not know for sure how many of them there really are. Our physical instruments can only "detect" four dimensions: three space dimensions and one time dimension. So, this question is yet unanswered.

- Can time speed up or slow down?

- If we speak about physical time, it would be appropriate to remember the Einstein's theory of relativity. If an astronaut flies in a photon rocket at the speed near light speed, then time will pass slower for him than for an observer here on Earth. If we find ourselves close to a massive body that creates strong gravitational field, time will also slow down. But this correction can only be measured on a cosmic scale when we speak about a star or a black hole. When on Earth, near a mountain, for example, the slowdown will be so negligible that there is even no point in paying attention to it. As for psychological time, things are simple here. Einstein once said: 'When a man sits with a pretty girl for an hour, it seems like a minute. But let him sit on a hot stove for a minute and it's longer than any hour'.

- What is more important: the past, the present, or the future?

- According to physics, there's no point in asking this question as this science does not operate the concept of importance. But for a human being, for an intellectual being, the present is more important. That very moment… What kind of future awaits us, largely depends on what we do in our present. Every second creates a situation in which we can make a choice. If I break off our conversation, for instance, this interview will never appear in the future. But I keep talking, and if we see it through, our readers will be able to learn what we've been talking about. Human beings' trouble is that we don't know how to live in the present moment. This is the most difficult thing.

- There's even a bigger trouble ‑ an invisible clock ticking away for every one of us… This means that time can come, but it can also pass?..

- And here we've touched upon the problem of biological time. Our body lives for a limited period of time, we're finite as creatures, and in this context time passes. There will come a day when we are gone. And in what space-time we will find ourselves when we leave this world, we will never know…But we can speculate about it.

- And what if time doesn't exist at all, what if it's just an illusion of human mind?..

- Some of the religious and philosophical traditions see space and time as phantoms of our consciousness. But from the point of view of science and reason, even our language uses the categories of space and time. You can't describe an event, which happened "nowhere" and "never". The language itself won't let you do that. Provided, of course, if we speak about a phrase with a meaning, and not some gibberish.

The time phenomenon… Some categories have to remain incomprehensible. Life, death, God, space, time… No matter how hard we think about them, we will never be able to solve their mystery. But while we keep thinking about them,.. we remain human.

P.S. SUSU-TV Television and Radio Company has presented a new episode of the Zolotoye secheniye broadcast before its audience. Its author and host Igor Klebanov talks about the time phenomenon. You can watch the episode here: