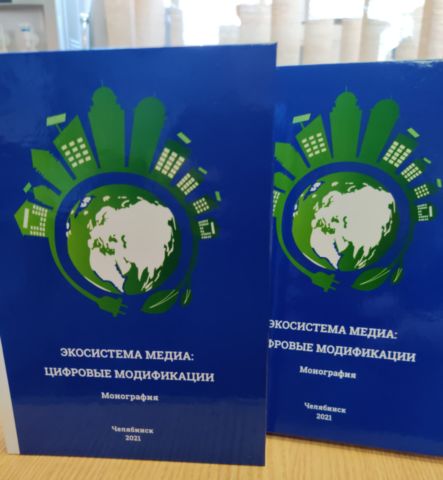 The team of authors of the monograph on topical problems of the modern media space associated with the development of transformational processes in the field of mass media now includes a number of doctors of sciences (Philology) in the field of journalism: Director of the Institute of Media, Social Sciences and Humanities of South Ural State University Lidiya Lobodenko, Head of the Department of Journalism, Advertising and Public Relations of the SUSU Institute of Media, Social Sciences and Humanities Liudmila Shesterkina, Professor of RUDN University Irina Volkova, Professors of the Academy of Media Industry Svetlana Urazova and Irina Kemarskaya.

The relevance of the Media Ecosystem: Digital Modifications monograph is justified by Russia's entering the third decade of the 21st century, which is characterized by positive dynamics of immersion in mass communications, scientific research and the study of the processes of using innovative technologies.

“The topic presented in this work, which substantiates the processes of changes in the media system over the past ten years, fixes the so-called “defining” points on which the transformations of modern media structures are built,” said Svetlana Urazova. “Above all, it refers to the issues of both intensive and extensive growth of mass communications, revealing their cause-and-effect relationship with the processes of accelerating mediatization of social space, which, developing vertically and horizontally, cause an active transformation of the media system, which is rapidly transforming into a self-developing ecosystem.”

An important aspect of modern discourse in the media sphere is also the widespread appeal to game techniques; new approaches to the formation of television formats and many other issues are thoroughly substantiated in the monograph.

“The development of Internet media in regions where, thanks to information, the intensive development of society is taking place, which is influenced by the accelerated progression of media communications that are acquiring a cross-communicative orientation, also appears as a significant theme in the context of improving the Russian media industry,” noted Lidiya Lobodenko. “The functionality of regional Internet media is also subject to structural transformations, now based on multimedia, the synthesis of journalism, advertising and PR. And this issue not only influences the economic orientation of the development of mass media, but also characterizes the final transformation of the media system into a business industry.”

Thus, the topics presented in this work are focused on the analysis of ongoing transformations that are currently taking place both in the media system and in the social space. However, only the mass media are capable of fully revealing the advantages of digital civilization, instilling and confirming in the public consciousness an interest in transformations of the modern world. This monograph is devoted to the wide possibilities that the mass media have, nowadays adapting in the digital environment.