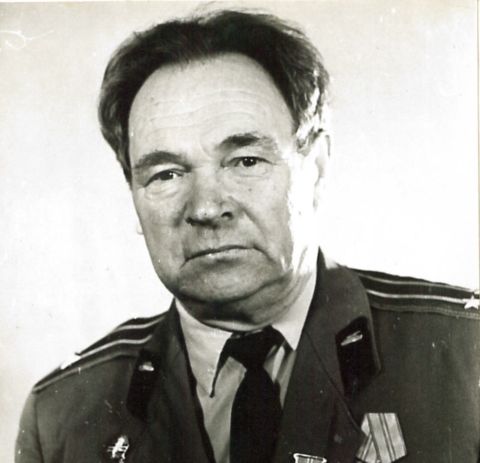 Petr Agapitov was born to a peasant family in the village of Mekhonka in Mekhonka District of the Kurgan Region on December 13, 1910. The life in a big family was difficult, so the sons were sent to work as farm labourers every summer. Later Petr Agapitov enrolled in a Perm vocational school and graduated from it with the speciality of a construction worker.

In 1934 he was enlisted into the army. Back then there were many illiterate soldiers in the army, that is why Petr Agapitov was assigned as the battalion teacher. He taught soldiers arithmetic, Russian language, and geography. And even though he did not have a special pedagogical education, he did well. Soldiers were happy to attend his classes. But this was not the only duty of Petr Agapitov in the army. He also saw service in the aviation on the Far East. Over the two years of his service the young soldier underwent good military training.

In 1940 Petr Agapitov worked at the plant named after Sergo Ordzhonikidze in Chelyabinsk, where workshops were being built for the production of KV tanks. In July of 1941 he was called to the front and as a combat engineer platoon commander was sent to the Southwestern Front. In October of 1941, on the Seversky Donets River in Rubezhnyi settlement, the Agapitov platoon joined the artillery squadron. They remained part of the squadron till March of 1942. Over that time Rubezhnyi passed over from hands to hands several times.

On March 8, 1942 the attack against the Germans was initiated by our forces. The combat engineer platoon of lieutenant Agapitov cleared mines on the bridge across the river. They had to work under shellfire. Over the bridge, the squadron manhandled cannons uphill as it was impossible to ride horses. Having gotten round the enemy, the artillerymen attacked behind the German lines. Rubezhnyi was retaken.

In spring the Germans launched a big attack. Our forces retreated to Don. From July 17, 1942 in the big bend of Don River heavy and deadly combats began. The soldiers fought selflessly and under the pressure of the overwhelming forces they had to retreat to the left bank of the river. The combat on the defensive perimeter lasted for a whole month. The battalion where Agapitov served continued to retreat towards Stalingrad.

In summer of 1942, at huge cost, the enemy managed to move 60-80 kilometres towards Volga River continuing their attempts to break away towards Stalingrad. On August 13th, when the army of Paulus reached the small bend of Don River, the platoon of Petr Agapitov was ordered to deposit a feint river crossing to the west of Vertyachy settlement and to draw the enemy's fire and give a chance to our forces to cross Don River in a different place. The platoon of Agapitov dispatched their mission – they distracted the fascists. During that combat Petr Agapitov got severely injured: he was shot in his right forearm. Because of the severe blood loss he felt giddy and was very thirsty. People managed to send him to the rear. Four months Petr Agapitov spent in a hospital in Ufa. For depositing the river crossing he was awarded the Order of the Red Star.

In December of 1942 Petr Agapitov enrolled in the Red Army Military Academy of Supply and Logistics quartered back then in Tashkent and successfully graduated from it three years later.

After the war, Petr Agapitov served in the army for many years. By the will of fate he lived in very different places across the Soviet Union and even abroad. He headed the Department of Planning and Finance of the Chelyabinsk Armour School; headed the administration and maintenance department of a military warehouse in Troitsk; and headed an administration and planning division office in the city of Molotov (now known as Perm). For four years he served as the regiment's service support commander and head of the administration and planning division office in the German Democratic Republic.

In May of 1958 Petr Agapitov retired from active service. And starting from June, he began working as a teaching assistant at the Department of Building Technologies of the Chelyabinsk Polytechnic Institute (CPI), and supervised the summer internships for students and the construction of the laboratories building of the Faculty of Engineering and Construction. He worked as Deputy Dean of the Part-time Department of the Faculty of Engineering and Construction, and as the head of the Institute's Academic Department (later, Student Office).

In 1970 the name of Petr Agapitov was included in the Institute's Book of Honour for his big and fruitful work, active public work, and on the occasion of his 60th birthday anniversary.

Starting from March of 1976, he worked as a master in the Department of Technical Education Equipment.