An Open House Day was held at South Ural State University for the first time this year. The meeting of university representatives with graduates of secondary and vocational schools attracted about 1000 applicants.

The event began with an official part in the Assembly Hall. High school seniors and their parents met with the SUSU administration. The guests were told about the competitive advantages of the university, what the specific features of the Admissions Campaign 2021 are.

"We are glad to see you in our university! Last year, the Project 5-100, of which we have been part for 4 years, ended. During this period, SUSU has raised to a higher development level. The university entered 3 out of 4 global rankings, identifying the best universities in the world, in 4 subject fields: Physics, Engineering, Computer Science, and Economics. This suggests that the scientific component of the university is at a profound international level. And educational programmes and the quality of education, first of all, are based on profound science. If we talk about how much our graduates are in demand, I can say: the best SUSU graduates choose where to go to work themselves, so make the right choice!"

Today the university is in dynamic development and strives to ensure that its students and graduates are competitive. The university has created a system for studying the English language, because the world leaders of the high-tech industry are actively developing and interacting with Russia.

SUSU is preparing to participate in the new Priority-2030 program. This will allow the university to take an even higher competitive position.

Director of the SUSU Student Campus Liudmila Zadorina told the audience about the opportunities that the university provides to non-resident students.

"SUSU Student Campus consists of 13 dormitories, the capacity of which is more than 6 thousand beds. This year we have opened two new dormitories, which are recognized as ones of the best in Russia. Payment for accommodation ranges from 800 to 1,000 roubles, depending on the corridor or block system. Today, students from more than 38 countries across the world live in the SUSU dormitories. In addition to the high level of comfort, all fire precautions are observed, video surveillance is carried out, a rigid pass entry system and its own security service are in operation," says Liudmila Zadorina. 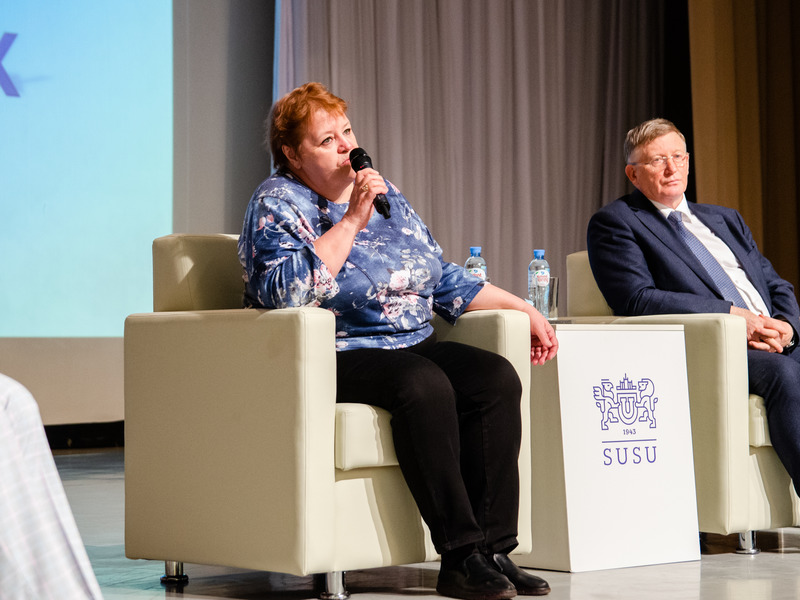 Another speaker at the Open House Day was the Deputy Head of the SUSU Military Training Centre Konstantin Krikunov, who spoke in detail about the advantages of studying at the faculty and the requirements for applicants.

"Our Military Training Centre is the largest in our country. SUSU students who successfully complete their studies at the Centre are awarded the military rank of "lieutenant", "sergeant", or "private", and are transferred to the reserves of the Armed Forces of the Russian Federation without military service," said Konstantin Krikunov.

The Executive Secretary of the SUSU Admissions Committee Aleksandr Gubarev dwelled on the key points of the Admissions Campaign 2021:

"Applications will be accepted from June 20th through July 25th. In the application, you can indicate up to 10 majors according to different admission conditions. The special thing about our university is that we allow applicants to prioritize the majors they choose. This year, universities are able to count the results of the exam in an alternative subject. Everyone can submit an application by attaching a copy or original of the certificate of secondary education to it. In addition, SUSU provides one more unique opportunity for applicants: if you provide the original of the certificate or diploma, we will give you access to your personal account, where you can make changes to your application remotely. One-time admission to universities across our country will take place on August 5th," said Aleksandr Gubarev. 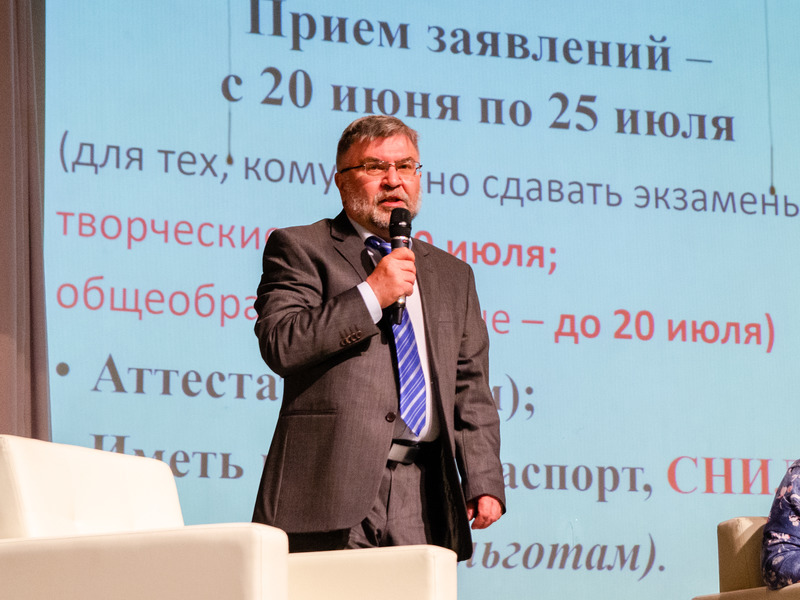 The Executive Secretary of the SUSU Admissions Committee also focused the attention of those present on the 5-year period of validity of the results of the Unified State Examination.

More information about the dates of the Admissions Campaign 2021 can be found in the presentation.

Upon admission, SUSU takes into account the individual achievements of schoolchildren. Applicants can provide diplomas and certificates of Olympiads and other intellectual, creative, and professional competitions, sports events, including a gold GTO Pin. Based on these documents, they can be awarded additional points (up to 10 additional points in total).

It is worth noting that the event was held in the question-answer mode, so everyone could ask their questions the speakers present and get comprehensive answers to them. 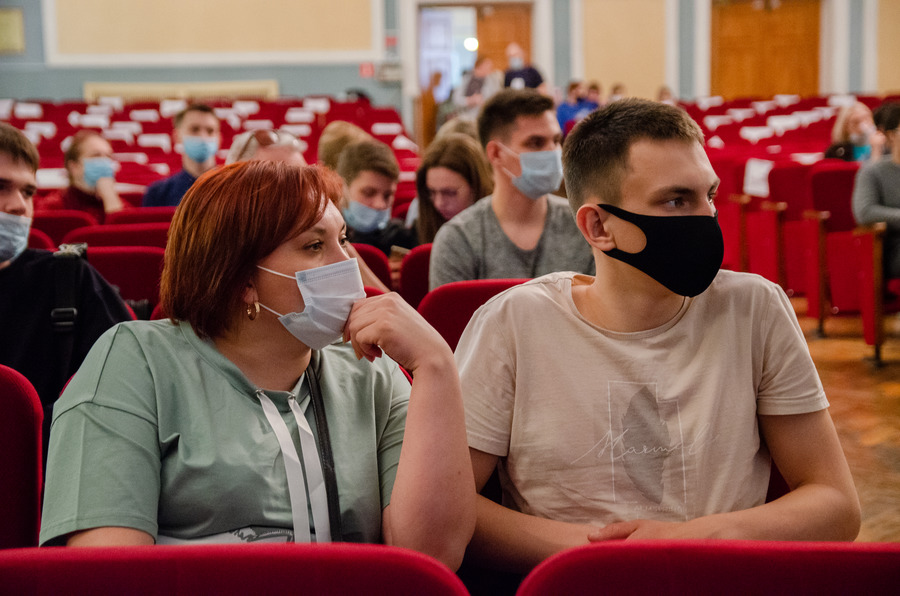 After a general meeting in the Assembly Hall held for schoolchildren and their parents, meetings with representatives of SUSU schools and institutes were organized, where they had an opportunity to get acquainted with the main fields of training, learn more about the specifics of education, and ask questions of interest.

Within the frameworks of the Open House Day, the SUSU schools and institutes also organized counselling units, where they provided personal consultations.

"Today we have a very large base of applicants. These are the guys who are the winners of the Zvezda (Star) Multidisciplinary Engineering Olympiad, these are those who took part in our Science Days. And we are glad that today we have not just a full hall of applicants, but also the meeting is broadcast live in several classrooms for schoolchildren and their parents. This indicates an interest in the fields of training that are available at the university. We have been working with approximately the same number of applicants at the Open House Days for 13 years," said Deputy Vice-Rector for SUSU Academic Affairs Iuliia Bolotina.

As the applicants and their parents noted, all the information received during the Open House Days is very interesting, relevant, and in many respects it is the starting point in making a decision to choose a university and a future profession.

"I liked that the institute interacts with other countries and cooperates with large companies. So far, I am considering only SUSU for admission, among other reasons because it has a military department," said Ivan Altukhov. "I will purposefully enrol in this university. SUSU is considered one of the best universities in Russia, and if this is the case, then you need to enter such a university. I am an active person, so I am choosing the major of Human Resources Management. I am sure that I can enrich my knowledge here. The meeting in the classroom, where I was able to get answers to my questions, stood out in particular for me," said Arina Zueva.

According to Elvira Vakhrusheva, the mother of a senior pupil, after the meeting there was a feeling that SUSU is really the best university, with a large scientific base and a professional academic staff.

"I am very glad that I visited this meeting. And I would like my child to enter this university. We will most likely decide in favour of Information Security," said the senior pupil's mother.

More detailed information about the Admissions Campaign 2021, the start and end dates of acceptance of documents, special conditions, exams and other advantages that the university offers to its students can be found on the SUSU applicant portal.

The event was held in compliance with all sanitary and epidemiological measures.

Watch a live stream video of the Open House Day: