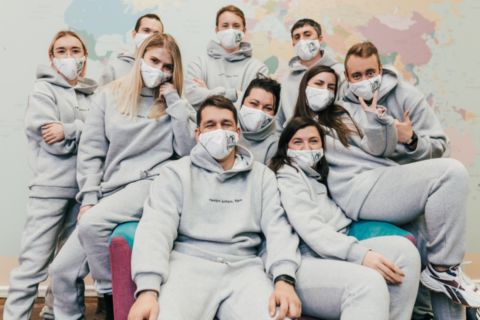 Last week, the online closing ceremony of the City of Kind Hearts project took place. The organizers summed up the results of the event, in which over 450 volunteers from our city took part during one and a half month. In the final live broadcast, an entertaining game was held for the volunteers, which all spectators were involved in, and the most active ones received gifts!

November 5th through December 20th, 4 stages took place of the project, which is being implemented by the Trade Union Committee of South Ural State University with the support of the Department of the Youth Affairs of the Administration of the City of Chelyabinsk.

“Despite the fact that this is not the first time I have implemented projects on subsidies and grants, this project has become a special one! Among the main performance criteria is the feedback from the participants. And the most important indicator is that during the course of the project, new volunteer centres have been opened in several educational organisations in Chelyabinsk,” commented Veronika Livonchik, project manager, Deputy Head of the SUSU Extracurricular Activities Office.

On November 13th, the strategic session took place as the first stage. An online meeting was held for 25 heads of volunteer centres in our region. The participants discussed the most relevant issues, outlined plans for the near future and identified problematic work spheres.

Then, on November 20th, an online hackathon took place, at which 25 teams from 12 universities and 13 secondary specialized educational institutions in the Chelyabinsk Region worked to solve the identified problems. Based on the results of that stage, methodological recommendations were created for volunteer centres, which they would be able to apply in practice in their work in the near future.

The media marathon became the third and most ambitious stage. December 4th through December 12th, more than 300 people attended 4 online lectures, where people shared on how to speak about good deeds. After each lecture, the participants were assigned homework, which was assessed by the organizers. As a result, the best works were selected, the authors of which received branded gifts: a portable battery for a phone and a ring lamp, which would help in creating better content.

“We would like to thank the organizers of the project from our entire team! We are extremely happy that we have taken part in this event. Thank you very much for this project and for the opportunities. There was so much useful information, so many lectures and even photo sessions. And also thank you for the interactive closing and interesting guests”, project participant Ekaterina Abrashkina shared her impressions.