Members of the Chelyabinsk Regional Student Team Awarded for Assistance in the Emergency Response to the Accident near the City Clinical Hospital No.2 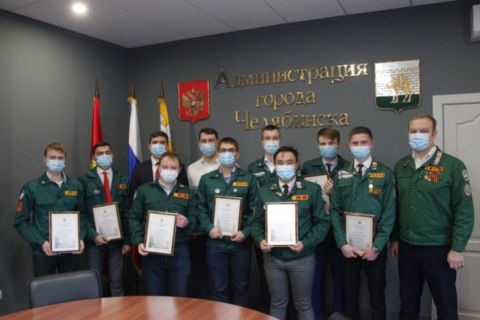 Today, a ceremony has been held at the Chelyabinsk City Administration to award the members of the Chelyabinsk Regional Student Team, who took part in the elimination of the consequences of the accident on the territory of the City Clinical Hospital No.2.

Eight young people, six of whom are representatives of the Headquarters of Student Teams of South Ural State University have been thanked “For active social work” by the leadership of the city of Chelyabinsk.

“I would like to once again thank you very much for your contribution in saving people’s lives in that hour of need. Thanks to you, we managed to evacuate people almost in a matter of minutes. We feel proud of you!” said the Head of the City of Chelyabinsk Natalia Kotova.

On October 31st, members of student teams quickly joined the emergency response to the accident and worked on the territory of the hospital until late at night.