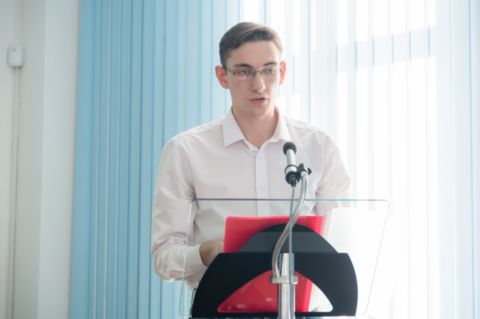 Students and employees of South Ural State University took part in the final stage of the UMNIK-2020 Research and Innovation Competition. In 2021, the holders of grants under the eponymous program of the Foundation on Innovations Facilitation will be announced.

88 projects, including those by students, postgraduates, employees of SUSU and other universities of the Chelyabinsk Region, made it into the final.

This year, the most popular directions were: New Devices and Intelligent Production Technologies; Information Technologies; and Resource-saving Energy. And if the first two directions have been steadily leading in terms of the number of applications submitted over the past few years, then this year the Resource-saving Energy direction has been added to this list for the first time.

"The UMNIK Competition has been held for over 10 years at the SUSU venue. Due to the unfavourable epidemiological situation, the final was held in the format of a video conference. Of course, this is a new experience for us, and we successfully coped with this task. There were some minor technical difficulties, but on the whole, everything went well. This year, there have even been a little more participants and those who reached the final than last year. The Foundation will announce the results of the UMNIK-2020 Competition next year," says Chairperson of the SUSU Young Scientists Council Daria Kremer.

The UMNIK program is aimed at supporting commercially oriented scientific and engineering projects by young researchers. Individuals aged 18 to 30, who are citizens of the Russian Federation and who have not previously won the program, qualify for the participation.

The winners receive grants in the amount of 500,000 roubles to conduct a two-year research work. According to the results of the previous competition, 27 people became the prize grant awardees in the Chelyabinsk Region.