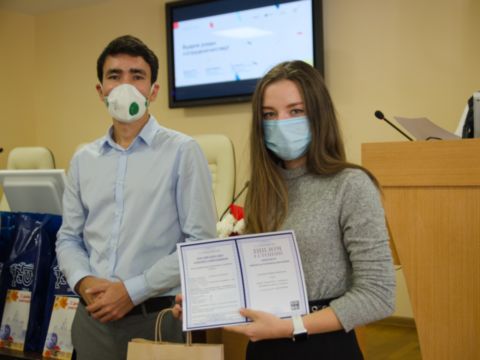 On December 1st, the selection round of the Zvezda (Star) Multidisciplinary Engineering Olympiad for School Students, which is being jointly organised by the Russian Engineering Union and South Ural State University since 2013, has begun in an online format. Every year more than 20000 school students from 76 regions of the Russian Federation take part in the event on the official website of the Olympiad zv.susu.ru. In 2020, a new internet portal has been created, which, despite all the restrictive measures, will allow to give access to the tasks of the Olympiad to everyone.

“Due to the current epidemiological situation in our country and in order to comply with the measures to prevent the spread of the new coronavirus infection, the organizing committee of the Olympiad has decided to design a new internet portal, which will allow the participants to start working on the test at any time. The marks can be seen immediately upon completing the test of the Olympiad,” says Deputy Vice-Rector for SUSU Academic Affairs, Coordinator of the Zvezda Multidisciplinary Engineering Olympiad Yulia Bolotina.

The Olympiad tasks of the online round will be available December 1 through December 30, 2020 in the personal account of registered participants. Registration has already started on November 15th.

The selection rounds are traditionally held in person. It is possible to take part in them at the venues of partner universities and educational organisations. The partners of the Olympiad are 68 Russian universities and 12 cadet corps, as well as leading corporations of our country's defence industry.

The Zvezda Olympiad is a unique project that helps foster the future talented scientists and engineers for our country. According to the statistics, 100% of the winners, upon graduating from school, enrol at the universities, mostly, at technical specialities.

Winners of the Zvezda Multidisciplinary Engineering Olympiad in the fields of Engineering and Technology, and Natural Sciences, having scored 75 points and more at specialization-related exams, have the opportunity to enrol at Russian universities without the need to pass the admissions examinations.