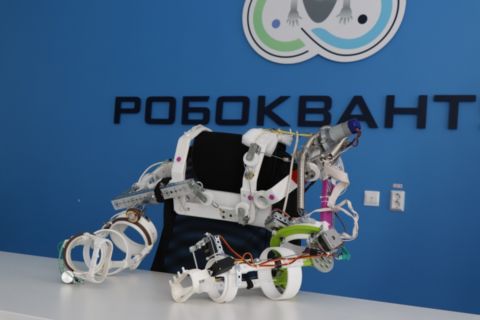 Students of the Chelyabinsk Quantorium Technology Park have developed a device for the rehabilitation of limbs of patients who have suffered a stroke or severe injuries.

The Foundation on Innovations Facilitation gave a high appraisal to the exoskeleton; a group of children under the leadership of their teacher, SUSU postgraduate student Konstantin Erakhtin, received a grant of half a million roubles within the framework of the UMNIK program.

How did they come up with an idea of creating such a device, what it is made of, to what extent it is useful for people – shares Konstantin Erakhtin, postgraduate student of the SUSU Institute of Sport, Tourism and Service.

– The students came up with the idea of creating the exoskeleton at the Quantorium during the meeting with the leadership of the major medical institution. The young scientists studied the history of the issue, the existing analogues, addressed the specialists in the field of medicine and rehabilitation, including those of the SUSU Department of Theory and Methodology of Physical Culture and Sports for a piece of advice. This project is quite serious and, at first glance, has to be carried out by adults, but the children have one big advantage: when connecting the modules, they tend to use non-standard problem solving, inherent to their age.

We tried to cover every aspect during the designing of the current prototype: we wanted it to be convenient and to operate properly, both technically and medically. As a rule, after a stroke, the connection between the limb and the nerve endings of the brain is lost. Our goal is to restore this connection. We took the mirror therapy method as a basis and optimized its application with the use of an exoskeleton: when you look in the mirror and raise a working hand, you also want to raise the non-working one, so the brain is deceived and the tactile sensations appear in the non-functioning hand. In this case we draw on the neuroplasticity of the human brain, that is its ability to restore lost connections after certain damage or as a response to external influences. Unlike with other analogues, you can move a limb in any direction with the help of our exoskeleton.

The work on the project took a whole year. The produced prototype was presented to the medical community and was given high appraisal. The technology implies not only a reduction in the time spent on rehabilitation, since the data is sent to the computer base and can be evaluated later, but also the optimization of the labour efforts of medical workers: thanks to the technological efficiency of the project, a specialist can work simultaneously with not just one, but with a dozen of patients. In addition, the exoskeleton helps to work remotely. Thus, the development of the South Ural schoolchildren will make the rehabilitation process more open and promising in the context of the development of telemedicine. 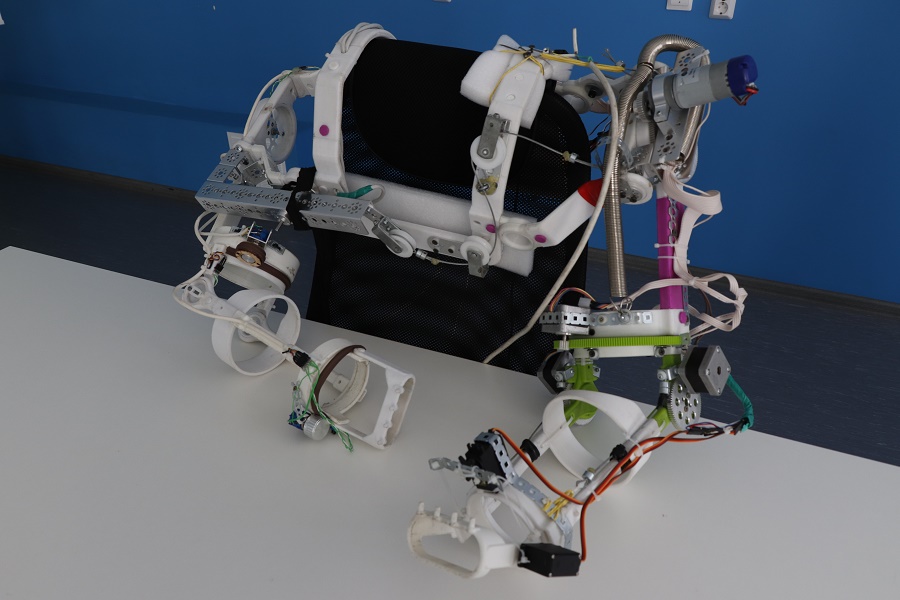 “I am proud of our students, this is a great achievement! Although the UMNIK program is an “adult” contest, for the first time a project created by children received a grant. Our children are the future of the Russian science. Undoubtedly, the victory in such a contest is the result of the well-coordinated work of the entire team: teachers and students of the Quantorium, postgraduate students and SUSU academic staff, specialists in IT technologies, robotics, industrial design and specialists in the field of medicine and rehabilitation,” said Vladislav Khalamov, Head of the Regional Centre for Technical Creativity, manager of the network of children's technology parks in the South Ural region.

And the students of the Quantorium do not stop on that, they already started creating the next version of the prototype, taking into account the wishes of the medical workers. It will be made of lightweight materials and will be more compact and easier to use.