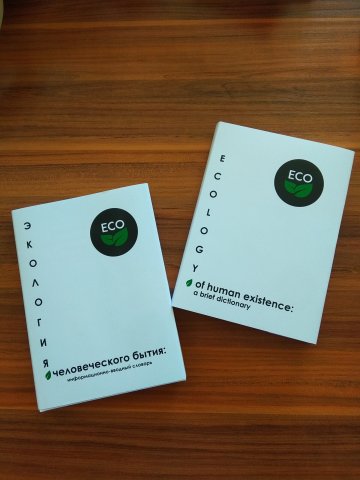 The Department of Philosophy of the SUSU Institute of Media, Social Sciences and Humanities presents a new topical publication, Ecology of Human Existence: a Brief Dictionary. This is a unique project not only for our region, but also for the world, because today there is no single ecological language in which a successful and effective polylogue can be held by society, government, business and science. The Ecology of Human Existence is a bilingual dictionary, it is published both in Russian and English, what allows us to successfully present it in the international scientific space.

The editor-in-chief of the dictionary, Assistant Professor of the Department of Philosophy, Candidate of Sciences (Philosophy) Dmitrii Solomko told about the reason for the publication and to whom it is addressed:

"The dictionary was prepared primarily as a scientific publication and mainly pursued research goals: first of all, to form a kind of nominal "alphabet" consisting of some of the most frequently used terms for the development of conceptual ideas within the topic. However, it can be useful for a wide audience. Every resident of a big industrial city (and Chelyabinsk certainly qualifies) directly faces one of the major global problems of today: the environmental crisis, generated by the intensive development of the technical and technological side of the human world. But this does not mean that the ecological approach is opposed to the technological one. It is built on the basis of the logic of the inter-proportionality of man and the technological world, on maintaining proportionality, correlating the possibilities of full reproduction and development of each "beginning" – both human and technical ones – in their orientation towards each other. That is, the environmental approach is based on the principle of optimality in relations between the parties, when the best opportunities are created for the development, fulfilment of the internal potential of each of the parties."

The team of authors includes 25 scientists who are candidates and doctors of sciences from nine Russian universities in Chelyabinsk, Ekaterinburg, Astrakhan, and St. Petersburg. The original design and iconography was created by design students to attract young people to an active understanding of environmental issues.

The Head of the Department of Philosophy, Candidate of Sciences (Philosophy) Elena Grednovskaia notes that bringing together the most diverse representatives of the scientific community on the most urgent problems of our time is the task of philosophers.

"One of the important and achieved goals of the dictionary was the consolidation of the Russian humanities scholars, mostly philosophers, to comprehend the scientific resource and practical potential of the topic of "ecology of human existence", as well as to create a unified worldview foundation for solving environmental problems. And now, through the word, through the clarification of concepts, the dictionary provides guidelines for the formation of environmental responsibility and literacy in the public consciousness, which are so necessary today for building the best harmonious relations possible between man and environment, the world of nature and culture," says Elena Grednovskaia.

The Ecology of Human Existence dictionary is available in the SUSU's library in hard-copy and electronic form. A live presentation of the publication is planned for autumn 2020 during the traditional celebration of the Days of Philosophy at SUSU.

The implemented project assumes its continuation in a series of publications in a reference format of environmental orientation. The next project of the department, continuing the idea of the published dictionary, is Ecology of Human Existence. Part II: Media Ecology aims to unite specialists in the field of communication media ecology in the context of the "human - technological world" interrelation, in which an ecologically oriented view is aimed at understanding the possibilities of modern digital communication technologies.

The Department of Philosophy invites everuone who wish to take part in a new project.