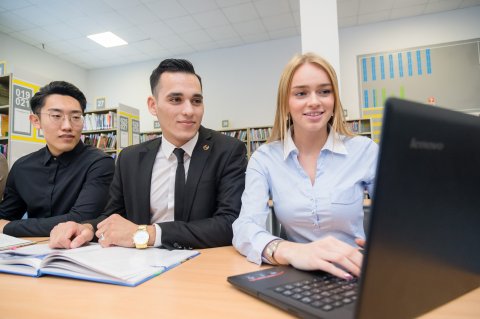 The main task of the project-based learning is to provide new theoretical knowledge, practical skills and open up new sides to one’s competencies.

The project-based learning has been taught in the Institute of Linguistics and International Communications (ILIC) since 2018, when the first project of the Development of the Concept of USCO Youth Forum, implemented at the Department of International Relations, Politology and Regional Studies under the leadership of Liudmila Shestakova started. The project ended in May 2020. It was aimed at: improving political culture, knowledge in the field of international politics and diplomacy among young people; developing the skills of public debate and diplomatic communication; broadening the horizons and information on the political systems of the SCO and BRICS countries; forming and establishing the intercultural communication skills, creating a friendly atmosphere in order to break down language and cultural barriers in communication among representatives of various national and cultural communities. The fulfilment of the project included several stages. At one of the stages, Master’s degree students of the Institute of Media, Social Sciences and Humanities joined the International Relations students to create a web-site and promote it in mass media.

The objective of the project-based learning is to motivate and train students for professional activity, as well as to form the necessary competencies for solving practical tasks.

“During the process of working on the projects, students learn to be team players, showing both their leadership, managerial and partnership qualities. Formal completion of a project does not mean it cannot be further fulfilled in other forms. So, the student members of the project team submitted two applications for a grant of the Federal Agency for Youth Affairs: the Science-to-practice Conference of the Youth Diplomacy as an Instrument of Social and Cultural Integration in the Modern World, and the Scientific Workshop of the Shanghai Cooperation Organization (SCO). Let's hope that the experts will do justice to the relevance and effectiveness of the submitted applications,” said Liudmila Shestakova.

The fundamental difference of the ILIC project-based learning in the 2019-2020 academic year, is that the departments have not only started new projects, but significantly expanded the fields of project activity. Since 2019, four different projects have been developing at the Institute:

All the projects of the Institute of Linguistics and International Communications meet the requirements of the time and the challenges of modern education. When international students started enrolling at SUSU, correctional courses, as well as international ties with universities needed to be established. The ILIC collaborates with Tianjin Foreign Studies University, and our academics hold master classes and lectures for Chinese students there.

The reason for fulfilling the projects by Elena Doronina and Elena Kharchenko is that today there are no nationally-oriented electronic courses targeted at studying Russian as a foreign language in all types of speech activity, while there is a huge need in correctional courses for students from Turkmenistan and China, which can be used in a blended learning system and in independent work, used to build an individual learning path. The employment of students in China and Russia depends on these tests. The customers of these projects are the Ministry of Education of the Chelyabinsk Region and the SUSU Centre of Language Training and Testing.

The project under the leadership of Elena Doronina is being fulfilled by Bachelor’s degree students, who study in the 45.03.01 Philology, the profile of Teaching Philological Disciplines (Russian as Foreign Language) programme. The project involves Master’s degree students, studying in the 45.04.01 Philology, the profile of Russian as a Foreign Language programme.

The result of the first year of projects is the creation of a lexical minimum and a grammar reference to the sections of the course in Chinese and Turkmen, and their translation. The creation of an illustrated and electronic dictionary to the lexical minimum and grammar reference, as well as the uploading of this content to the Electronic SUSU web-portal.

Currently, the work on developing tests, electronic educational games for sections of the course, as well as writing scripts for video tutorials is underway. “On the one hand, the preparation of online classes seems to be quite challenging, it is an everyday hard work. But on the other, the distance format of learning that our students have switched to has shown the importance of acquiring the skills that are formed in the process of working on a project. The 3rd-year Bachelor’s degree students are mastering the technology of creating educational animated films that will allow students to automate the use of grammatical constructions in speech. The 1st-year Master’s students are also working on educational animated films and, in addition, learn a variety of visualization techniques necessary in an electronic course. This work is done in collaboration with the students of the Department of Design and Visual Arts, who are developing the stylistics of visual presentation of courses,” said the heads of the projects Elena Kharchenko and Elena Doronina. 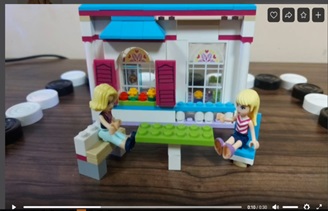 The project by Svetlana Sheremetieva is focused on creating the systems of the automated processing of text information, in particular, chatbots on consulting in philosophy. The project team includes Master’s degree students in the 45.04.01 Philology, Theory and Practice of Translation programme. The first year of the work resulted in compiling an ontology model that includes the conceptual structure of the Measurements of Non-physical Quantities subject field and the relations between concepts; collecting a Russian-language subject-oriented vocabulary (including the most frequent terminological units of the subject matter) and putting the terminological units included in it onto ontology concepts (for the purpose of subsequent automation of ontological analysis); building a “golden” marked case in Russian; identifying semantic patterns of interaction of ontology concepts in the texts under study; developing an ontology modelling methodology, ontological analysis of texts.

During the second year of study, it is planned to collect a parallel English-Russian core of the subject matter, and to build a multilingual lexicon relevant to ontology. It is also planned to design a prototype of a dialogue system on consulting in philosophy based on automated conceptual mark-up and ontological analysis of the text.

“The results represent a scientific basis for designing a chatbot on consulting in philosophy. We are planning to use the obtained results while drawing up a grant application jointly with the Department of Philosophy (including such experts, as E.V. Grednovskaya, K.E. Rezvushkina). The preparation of publication based on the materials of the work began,” explained Olga Babina.

In the Linguistic Support of Production Processes project by Elena Teleshova five students participate: Specialists in the 05.05.01 “Translation and Translation Studies” programme. The aim of the project is to create an algorithm for the translation of scientific and technical texts, as well as a dictionary of terms of the subject matter of Mechanical Engineering and Information Technology.

The basis for the fulfilment of this project is a large amount of documentation ensuring the production and sale of competitive products for the needs of the oil and gas industry, shipbuilding, and power engineering. To achieve the goal, it is necessary to develop ways to optimize the translation process.

During the first year of study, the students learnt about the requirements for the translation of scientific and technical documentation. As part of their research work, they determined the principles of scientific and technical translation in Russian and English, and then completed the translation of technical documentation. A glossary was also compiled, and terms were selected based on the automatic processing of the corpus of texts. While translating the texts, the project participants started to fill out an electronic dictionary, which already has more than 700 terms on these subjects. To create a dictionary, a pattern developed by the SUSU Innovation in Linguistics Research and Education Centre (LiNT REC) is used.

“The product of our project at the end of the second year of study will be an electronic dictionary of technical terms. As a result of participating in the project, the students will not only learn how to work in a team, but will also gain practical experience in solving translation problems and will be able to use the accumulated materials in their research,” said Elena Teleshova, project manager.

The technology of project-based learning allows to inspire students to engage in scientific and professional activity and see the real-life results of the educational process. Each year, there are more and more projects, which is a good sign indicative of students' interest in project activities.

Elizaveta Kravtsova, Project Manager of the project-based learning in the Institute of Linguistics and International Communications, Associate Professor of the Department of Linguistics and Translation, Photo: library of Oleg Igoshin
Contact person:
Evgeniy Zagoskin, Office of Internet Portals and Social Media, 267-92-86