KSTATI Science Festival to Be Held Online for the First Time 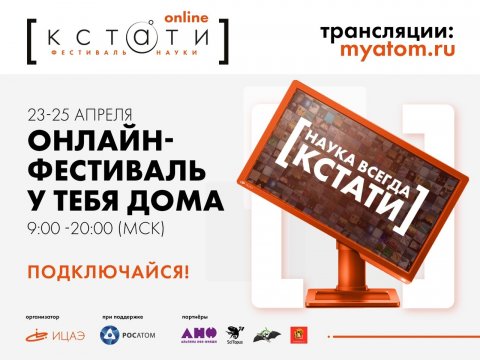 The KSTATI annual science festival, organized by the network of Nuclear Energy Information Centres, is to be held online for the first time.
Lectures, workshops, meetings with scientists and experts, who will show that discussing science can be easy, fun and “delicious”, are to take place non-stop within the framework of the festival April 23rd through April 25th.
The program of the festival is targeted at wide audience: these events will be of interest to children, adults and those interested in modern science.
If you wake up early, you could get a chance to have a “creative” breakfast with Dmitriy Pobedinskiy, blogger and populariser of science; Ekaterina Shugaeva, TV journalist; and Andrey Timonov, expert in the field of communication. The breakfasts will be hosted by Egor Banishevskiy, Director of the Murmansk Nuclear Energy Information Centre. In the course of informal conversation, participants of the creative breakfast will learn the secrets of life balance: how successful people combine work and personal time.
If you start your morning with physical exercises, you could work out together with the experts of the Nuclear Energy Information Centres. Irina Bilai from Krasnoyarsk, Sonya Davydova from Chelyabinsk and Vsevolod Tormasov from Kaliningrad will be contacting Aleksey Fedorov, researcher of the Russian Quantum Centre; Anna Khoruzhaya, radiation diagnostics doctor; and Elena Sudarikova, anthropologist. Together, they will talk about their sports preferences and will share their favourite exercises.
You will be able to “boost” useful skills and learn DIY not leaving your own house at online workshops with Irina Baranova and Ivan Martynov, staff members of the Nuclear Energy Information Centre.
The organisers of the festival also thought about school students and academics, who are having a hard time during the period of self-isolation. NON-lessons, at which the students will gain knowledge which they do not receive in ordinary school, were designed especially for them. This year, Vladimir Spiridonov, psychologist; Aleksandr Mitryakov, archaeologist; and Andrey Vorokh, materials science specialist will be helping them. At NON-lessons school students will find out how to avoid mistakes while preparing for the Unified State Examination and achieve good results, how we get certain knowledge about the early preliterate eras, and why the sky is blue, and the sun is yellow.
After lunch, the viewers of the KSTATI online festival will be participating in Show Time: popular science talk shows by the Nuclear Energy Information Centre. Together with Airat Bagautdinov, creator of the Moscow through the Eyes of an Engineer project, they will go on a virtual excursion around the most unusual academic buildings of the world; and together with scientific journalist Anna Khoruzhaya, psychologist Takhir Bazarov, and academic Marina Vayndorf-Sysoeva they will “break down into atoms” the online format.
Besides that, the viewers of the online broadcast will be able to act as jury in a court hearing regarding the superhero of the Marvel universe, Spider-Man. Anton Sedov, Candidate of Sciences (Physics and Mathematics) will act as the prosecutor, and Denis Suvorov, Candidate of Sciences (Engineering) will act as the defence attorney.
The festival also includes game formats: the viewers will be able to become the participants of the Matrix intellectual game by the Saint Petersburg Nuclear Energy Information Centre; Atoms Bond Beautifully by the Rostov-on-Don Nuclear Energy Information Centre; and the Nuclear Pass-Fail Test online quiz by the Smolensk Nuclear Energy Information Centre.
You can learn about the latest discoveries and news on modern science from the Public Talk live broadcasts with famous scientists such as astrophysicist Yuriy Kovalev, neurophysiologist Vyacheslav Dubynin, as well as science journalist and medical blogger Aleksey Vodovozov.
The highlight of the KSTATI festival will be the ScienceVision battle among popularisers of science. Physicists, psychologists, chemists, biologists, historians, and astronomers will give five-minute lectures, and viewers will vote for their favourite talks.
The winners of the battles will be awarded in two categories: Scientific Exorcist, and Clear Point. The main prize will be an educational tour to one of the Nuclear Energy Information Centre cities after the isolation is lifted.
Link to the festival events: https://myatom.ru/

The KSTATI science festival has been held by the network of Nuclear Energy Information Centres since 2015. This is a marathon of lectures and scientific talk shows, quests and intellectual games, excursions and film presentations by leading scientists and popularisers of our country's science. In 2020, the festival will be held online for the first time.
The KSTATI online information partners: Alpina Non-fiction publishing house; SciTopus hub of popular science videos in Russian; ANTROPOGENEZ.RU, the biggest Russian scientific and educational portal on human evolution; and Scientists vs Myths forum.