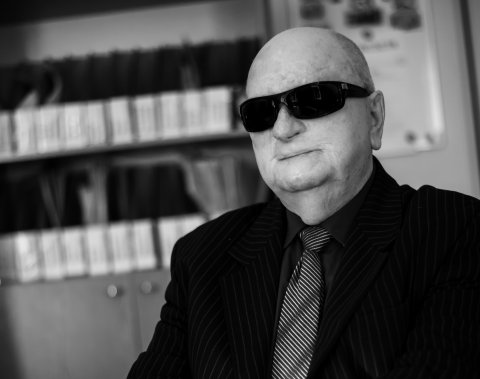 In a time of pandemic everyone feels the significance of life and to what extend it depends on science. Is it possible to kill not just a disease but the “main virus”, that is death?

Doctor of Sciences (Philosophy), Professor of South Ural State University Igor Vishev is known throughout our country as the author of the concept of practical immortality of man. He had to overcome many quirks of fate. At the age of 14 he lost his eyesight due to a chemical burn. Despite that fact he managed to enrol in Moscow State University and made a career in science. Nine years ago he lost his wife, but was not afraid of the gossips and agreed to her cryonization (DNA samples freezing). The reason is that the scientist from Chelyabinsk believes that immortality can be achieved by scientific methods.

Not a Loss But Gain

– Where did this interest come from? Was the loss of your loved one the cause, or was it a mere scientific purpose?

– People often think about such things after death of their close ones, but I had it the opposite way. The idea was born after the birth of my daughter, so the impetus was not a loss but a gain. My daughter was born about a month after the beginning of the space era, in October 1957. There was an incredible enthusiasm at that time; it was the realization that the fairy tale was becoming the reality!

– So you got an idea that the immortality fantasy could become reality?

– I thought 'My daughter has just been born. Is she already doomed?'. People fly to space, but are powerless in the teeth of death. Why should we put up with this natural disgrace? What should we do to save both strength and life? In Chelyabinsk I became interested in Advanced Mathematics, Physics, and I still had had an interest in History from school. I asked to be entrusted with delivering speeches on atheistic topics; so I spoke at factories, in train sheds and even at the confectionery plant. I was interested in a deeper study of religion since it spoke about immortality. I am sure that the religion is more significant not in its morality, but in the idea of the post-mortem existence of man. And finally I decided to develop my own concept of immortality which would be an alternative to the religious one.

Cyborgs Are Not an Option

– Is immortality possible in a practical sense? It is believed that it contradicts the eternal laws of nature.

– Immortality is often understood in an absolute sense, that is the absence of death. But I am speaking about practical immortality, which are the real possibilities of man to live without limits while remaining young or adult. You see, the immortality of the soul is absolute. However the practical immortality does not exclude death completely, since a man can die from a random external cause, whether it is an injury or the coronavirus. How can we bring a man back to life? This is the meaning of the practical immortality. It turns out that death is possible, but there are ways to exclude its fatality.

– What are these ways?

– The methods are quite different. Such a trend as transhumanism speaks of a posthuman or even nonhuman. For example, it is a cyborg that can replace damaged parts of the body. But I think it is no longer a man. In immortology we are talking about a biological man. This does not exclude the use of technical means. The solution is in cloning.

– As far as I know human cloning is banned…

– Yes, and I feel very upset about it. There has been a ban on research on human cloning for ten years now. It is permitted to grow human embryos for up to two weeks. And then they can be thrown into the garbage! Can it be considered moral and ethical? To study cloning under control is prohibited. It is absurd, isn’t it?

– Won’t the clones be just biological twins? Can they preserve the so-called identity of the original man?

– I don’t think this is the case. This is not a new combination, these are the same cells. And after cryopreservation the identity is on the same level, both on the physical and the mental one.

– This idea has many opponents. For example, they say that clones have aggression. Such conclusions were made on the behaviour of the cloned animals.

– I have heard about this observation, however I could not find any source of it. Anyway, even if it is true, it is necessary to study the phenomenon and understand how such signs can be eliminated. It should be studied, but not banned.

We Also Have Oceans and Space Left

– You gave your wife’s DNA samples for cryopreservaion. Are you personally ready for such a step?

– Yes, I am. And I believe that in the far future we will be able to return and meet again. I believe in it.

– Let’s say that such experiments will be a success. Will the problem of overpopulation on the Earth arise?

– There are much more options left on the planet. You can use the ocean, which occupies most of the Earth’s surface. Moreover, there is still space! It must be explored not only for resettlement, but also for solving other problems. These include mining, Earth protection, and great chances of human survival in the event of any threat to the planet. This is what we were dreaming about when the space age began.

– What do you think about the theories in the field of quantum physics that allow the existence of the underworld?

– I am sceptical about it. These are the attempts to support religion. I think that there are no supernatural phenomena. We need to deal with the body that we have.

- So we can assume that while research on cloning is prohibited, there would be no further development in your field, correct?

– Why is that? The human genome decoding is underway, as well as the study of stem cell regeneration, nanotechnology, cryonics, and the so-called computer immortality, that is the transfer of human consciousness to other carriers. These are all stages of our research. Once there was a time when the hypotheses on transplanting a head from one body to another were considered fiction (remember Professor Dowell’s Head by Alexander Belyayev?). And now these are scientific experiments, when they move from theory to practice. This is also the path to practical immortality.

Look how many people are dying from the coronavirus now! But they could be brought back to life; maybe not now, but later. I myself do not perceive the loss of my wife as the final loss, because I hope for success in cloning, and this reduces the intensity of the tragedy. We all need to fight for life. Life is beautiful, amazing, and worthy the immortality.

Igor Vishev was born in Volsk in 1933. In 1956 he graduated from the Faculty of Philosophy of Moscow State University. He was assigned to the Chelyabinsk Polytechnic Institute, where he went from a teacher to a professor in the Department of Philosophy. In 1990 he defended his doctoral thesis on the topic "The Problem of Death and Immortality of a Person: Formation, Evolution, Prospects for Solution". He is the author of more than 200 scientific papers.