SUSU Celebrated 100 Years since Birth of Legendary Head of Department 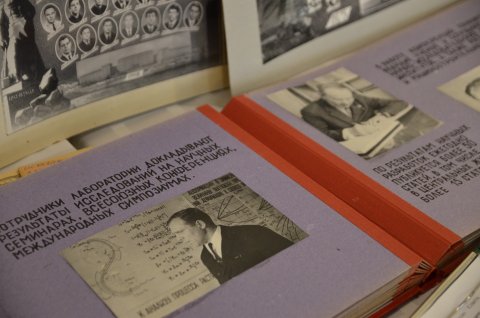 On March 21, South Ural State University celebrated 100th anniversary since the birth of Vladimir Vydrin, a legendary Head of the Department of Pressure Metal Treatment (Rolling) at Chelyabinsk Polytechnic Institute, Professor, Doctor of Sciences (Engineering) and the Honoured Worker of Science and Technology of the Russian Soviet Federative Socialist Republic.

In honour of the great scientist an event was held on March 21, at which relatives, colleagues and friends of Vladimir Vydrin gathered to cherish the memory of him that has been lasting for almost a century now.

“Vladimir Vydrin is one of the outstanding professors, who established Chelyabinsk Polytechnic Institute. He started when the university had neither equipment, nor financing. What Vladimir Vydrin did was a brilliant result which one should strive to. He dealt with deep theory of fundamental science, which helped to achieve serious results,” says the SUSU Rector Aleksandr Shestakov.

One of the main guests of the event was the legendary professor's son Aleksandr Vydrin, Doctor of Sciences (Engineering), Professor of the Department of Metal Forming, Deputy CEO for Research of R&D RosNITI.

“It is an extraordinary event for me. As I remember from my childhood, dad’s birthday has been a real holiday. 100 years have passed since his birth, and the fact, that people who worked with him have been able to come today, is very important. It’s great! The first memory of him is that he spent all his time at work. But we were always together on his vacation. He was always kind, and I don’t remember him scolding us. I respect him,” says Aleksandr Vydrin.

During the work of Vladimir Vydrin the Department became known not only in the city but on the global scale as well: licenses for inventions developed by the scientists of the Department were being sold abroad, and the developments were being used in many industries. A fundamental research laboratory was opened at the Department, the staff expanded to 100 people.

In the activities of Vladimir Vydrin deep research was always combined with the implementation of the results of work into the production. The works by Vydrin and his students were aimed at the solution of topical tasks on increasing the efficiency of production and improving the quality of products.

Vladimir Kaukin was one of the students of Vladimir Vydrin, now he is an expert in the field of business support at Chelyabinsk Metallurgical Plant. Vladimir Kaukin also shared memories of his teacher.

“Vladimir Vydrin was a truly outstanding scientists, talented initiator not only in the educational process, but also in terms of introducing new scientific achievements into production. He was composed and reasonable. He benefited the Motherland.”

Within the framework of the event, the Primavera choir headed by Aleksey Prosekov performed for the guests, and Mikhail Astvatsaturian played guitar and sang some songs.