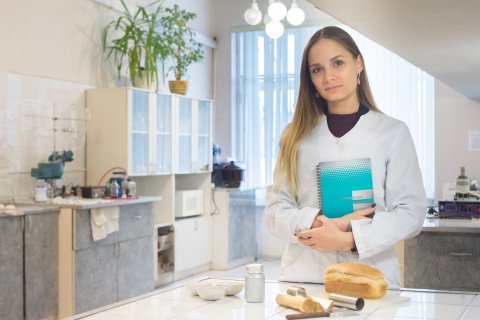 The manufacture of products enriched with biologically active substances that perform prebiotics functions has been actively developing recently. Scientists from South Ural State University have patented a new method of increasing biological availability of active substances with antiviral and immune-modulating properties to develop healthy products such as yogurts and bread using ultrasound.

Algae as a Source of Valuable Substances

At SUSU, the Synthesis and Analysis of Food Ingredients Laboratory carries out research on the properties of food products. The researcher from India, Professor of the National Institute of Technology Shirish Sonawane is the Head of the laboratory. The Head of the laboratory on behalf of SUSU is Doctor of Sciences (Engineering), Professor Irina Potoroko. One of the research fields of the scientists is the development of new phytocomplexes with high antioxidant activity. The SUSU laboratory staff are studying the possibilities of using ultrasound to increase bioavailability of nutrients from such ingredients as sea algae.

“Extensive material has been accumulated in the world science; it proves the use of polysaccharides of algae and echinoderms as treatment and prophylactic prebiotics. The resource potential of this type of raw materials is high enough. For example, the seas of the Far East are distinguished by the richest reserves of brown algae, which are estimated at 14-16 million tons. We live in the region, which is remote from the sea, therefore we lack iodine. Our developments will help to compensate for the lack of this important microelement in nutrition,” says Irina Potoroko.

The main components the scientists work with have been obtained from algae from the Far East ocean waters.

One of the relevant aspects in the process of organic food production is the use of adaptogenic ingredients obtained from the processing of raw materials of plant and animal origin. The scientists of South Ural State University are studying ways to apply ultrasonic effects to micronize plant components.

“Fucoidan is a brown algae polysaccharide,” explains postgraduate student of the Department of Food Technology and Biotechology Anastasia Paymulina. “It is characterized by antiviral and antibacterial properties, reduces high cholesterol in the blood and minimizes the risk of cancer. However, fucoidan has quite a large molecular weight, which complicates its absorption by the body. In order to reduce this weight, we use the method of ultrasonic micronization. Fucoidan with a lower molecular weight has more pronounced biologically active properties, which makes it possible to use it when creating healthy food.”

This polysaccharide is widely used in the food industry, for example, in the yoghurt and bread technology. The fucoidan modification approach proposed by the young scientists of the university ensures the activity of biochemical processes. The authors of the patent prove that a new form of polysaccharide is accessible for lactic organisms; therefore, the process of fermentation is faster, while the biologically active substance, kefiran, is being accumulated. The use of micronized fucoidan solution in food production will slightly increase the cost of the product, but the effect on customers' health will be significant.

To confirm the efficiency of this approach, it is necessary to further evaluate the consumer properties of food products obtained using micronized plant ingredients. Food manufacturers have already got interested in research by the Russian scientists. The research of scientists from South Ural State University in this field will be continued.