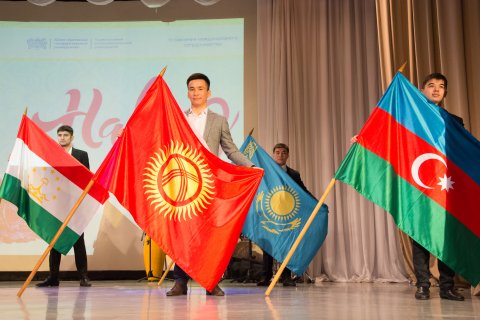 Nowruz is the main holiday for many peoples in Asia, signifying the coming of spring and the New Year by the Iranian solar calendar. It coincides with the day of the vernal equinox, which falls each year on March 20-21, and symbolizes the beginning of a new life and the renewal of nature.

The thousands of years of history behind this holiday hide many traditions. Nowruz symbolizes the continuous character of the world of nature and man, the unity of people, hope, beauty and prosperity, peacefulness, and renewal of the soul. According to ancient traditions, before Nowruz, people must thoroughly clean their homes and clear all of their debts entirely.

A holiday feast with seven dishes is an indispensable feature of this holiday; it is called Haft-sin. The ritual dishes of Nowruz follow the rules of haft-sin. In other words, it consists of dishes, the Persian names of which begin with the letter “sin” or “shin” in the Persian alphabet.

1 Senjed (olive) – a symbol of wisdom and a call to reason;

2 Seeb (apple) – a symbol of the health of man and society;

3 Seer (garlic) – a symbol of protection, abstaining from violence;

4 Serkeh (vinegar) – a symbol of agreement and humbleness;

6 Samanu – a symbol of strength and a good harvest;

7 Sumac (barberry) – a symbol of fairness and hope.

The main and most important dish of Nowruz is samanu, which the women cook for many hours from flour and grains of sprouted wheat in the presence of the whole family.

The process of cooking this holiday dish is accompanied by songs and dance. It is cooked for 10-12 hours. Pebbles are thrown in the cauldron so that the dish does not burn; and they believe that the pebbles bring happiness to those in whose plate they land.

On this holiday, children go around the homes in their neighbourhood and sing songs about Nowruz. They are awarded sweets for their performance by the hosts. Celebratory events are held on the streets: artists perform, contests of wit are held, songs are sung, jokes are told.

Festivities are held on this day in many countries. For example, per tradition, horse races and fights are held in Uzbekistan. There are similar traditions in Kyrgyzstan: during the festivities they demonstrate the art of horse riding. In Tajikistan, kushti competitions (a national form of wrestling) are popular.

In CIS countries, Nowruz is celebrated by Tatars, Kazakhs, Bashkirs, Tajiks, Kyrgyz, Uzbeks, and many other peoples. South Ural State University unites different nationalities: in our university, there are more than 1500 students from neighbouring countries. So it has become a tradition to celebrate this holiday!

The SUSU International Office and the South Ural Association of International Students offer their congratulations to everyone on the coming of spring through video!