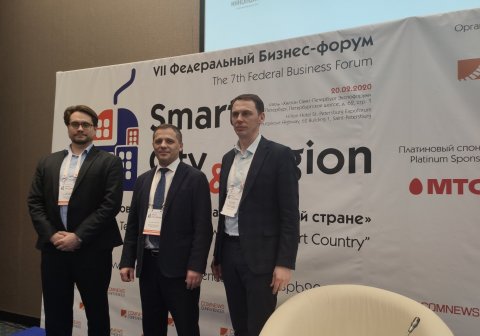 On February 20, 2020 the SUSU delegation took part in the 7th Business Forum “Smart City & Region: Digital Technologies Paving Way to a Smart Country”. The delegation members included representatives of the Smart City Management Centre – SUSU City Lab: SUSU Vice-Rector for Research Anton Korzhov, Associate Professor of the Department of Automobile Transport Vladimir Shepelev and Head of the Informatization Office Evgeniy Kabiolskiy. The forum’s key goal was to discuss the most pressing challenges, which regions face in the process of implementing the “Smart City” project.

The forum’s tasks included establishing of a dialogue between the government and the business community; identifying the mechanisms of solving the main problems of the urban environment digitalization; searching for innovative business models to solve the tasks of digital transformation of regions; exchange the practices of raising private funding; revealing the best methods of evaluating the level of digitalization in each city and region.

In the course of the forum, the present and the future of “smart cities” were discussed, the independent search for the tools of funding such projects, the practical results of “Smart City” projects implementation, the replication of the best examples of digitalization, the specifics of development and digital solutions for the urban system of transport; the telecommunication infrastructure for “smart cities”, the approaches to evaluation, and the role of rating the “smart” characteristics of a city and region. Among the forum participants were representatives of the federal legislative and executive authorities; administration of the Digital Economy of the Russian Federation national project; representatives of governments of the Federation entities, Mayors’ Offices and city administrations; IT companies; power distribution and other utility enterprises; manufacturers of electronic metering devices; representatives of businesses interested in implementation of digital technologies; and many other experts from the sectors related to digitalization.

Special attention at the forum was paid to the issues of digitalization of the housing and utility sector and the transport system – the two of the most problematic digitalization sectors in the majority of the Russian Federation regions. An important part of the event was the cross-regional exchange of the best practices in the “Smart City”/ “Smart Region” projects.
As part of the session on the “Smart Urban Transport System: Complex Projects and New Approaches to Implementation”, Associate Professor of the SUSU Department of Automobile Transport Vladimir Shepelev delivered a presentation on the “Monitoring of Road Traffic and the State of Road-and-transport Infrastructure Using Neural Networks”. 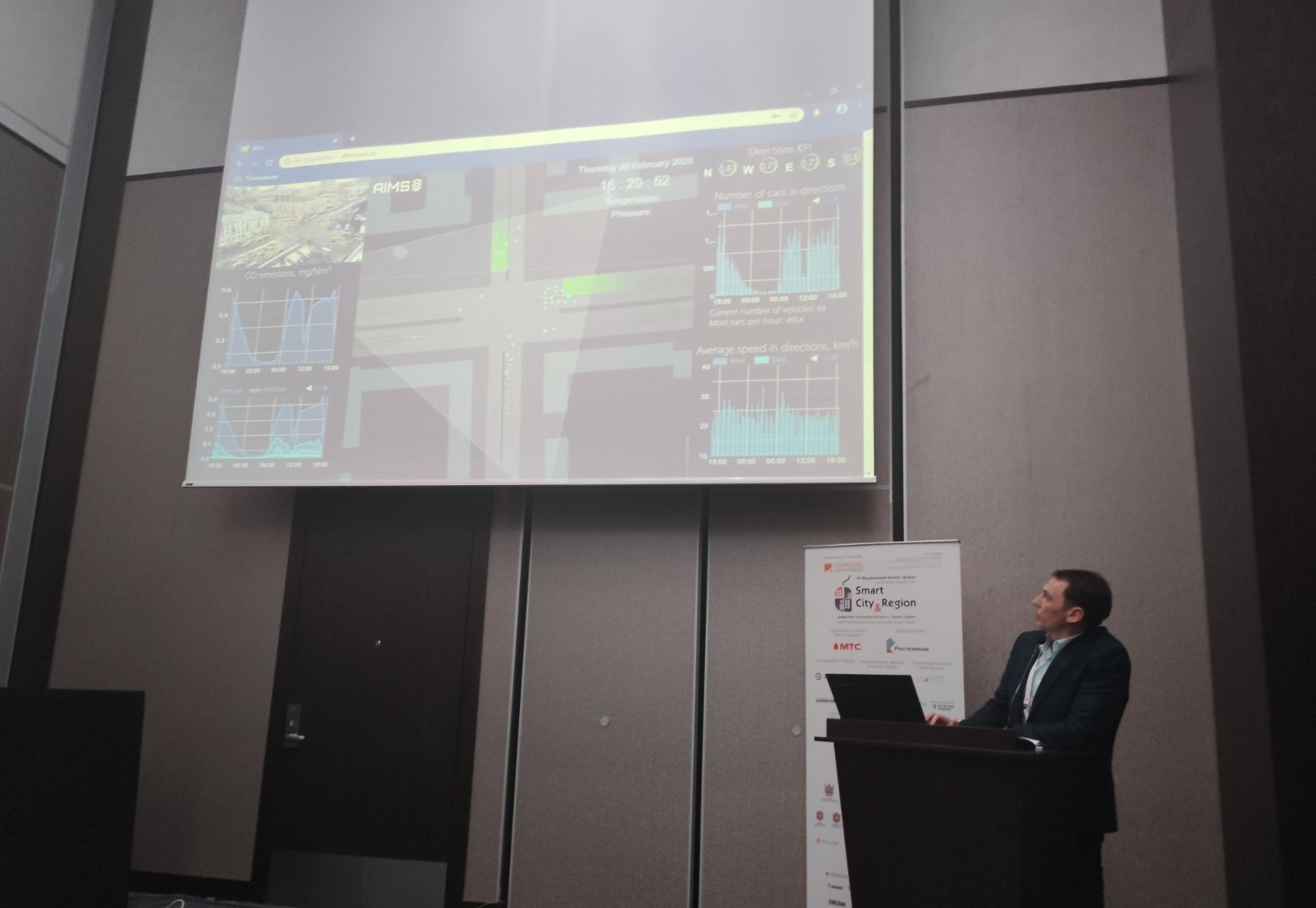 The presentation of the SUSU-developed AIMS digital platform in the real-time mode sparked the biggest interest among the forum participants. Following the results of the presentation, the City Lab team held negotiations with the representatives of the Saint Petersburg Department of Transport, ITMO University, and MosTransProekt Research Institute. In particular, a preliminary agreement was reached with the colleagues from MosTransProekt on meeting in Moscow in order to hold an expanded presentation of the possibilities of the AIMS platform.

An agreement was reached with the Saint Petersburg Department of Transport on signing a collaboration contract and launching a pilot project on testing the digital platform in one of the city districts. Jointly with colleagues from ITMO University (experts of the “Smart Saint Petersburg” Project Office) a seminar was held in the form of a round table on exchanging the practices and fulfilling further approaches within the creation of a “Smart City”.

Summarizing the participation in the forum, SUSU Vice-Rector for Research Anton Korzhov noted:

“Starting from 2019 Chelyabinsk has become part of the Smart Cities program initiated by the Ministry of Construction and Housing-and-utility Sector of the Russian Federation. Since November of 2019, SUSU has actively joined the fulfilment of the project on digitalization of Chelyabinsk. Two project and analysis sessions on “Chelyabinsk, a Smart City” were held at the university, among the participants of which were representatives of the government authorities, businesses, and scientific community. A memorandum on creating a Smart City project management system at the university was prepared. In the beginning of the year of 2020 a Smart City Management Centre (City Lab) was created at the university. It is an open platform for a dialogue between the city administration, and academic and business communities for the purposes of implementing the “Smart City” project in Chelyabinsk.

Our visit to the forum is especially important in terms of exchanging the practices and learning about new initiatives and solutions in this field. In the course of the forum we have established business contacts with the representatives of the ITMO University’s Project Office, the functions of which in Saint Petersburg are similar to the ones of the Smart City Management Centre – SUSU City Lab. The experience that we gained at the conference and further fruitful work within the acquired business contacts will allow us to step up to the next level in the development of the “Smart City” project and prepare a quality technical assignment for the project,” stressed Anton Korzhov.