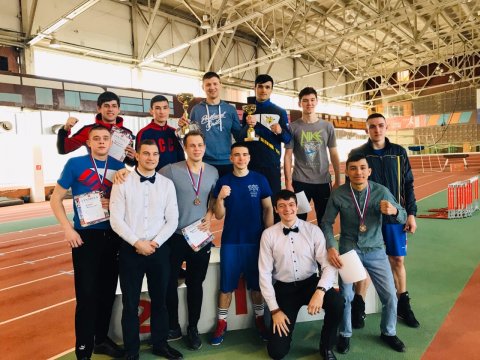 At the end of April, a boxing competition was held as part of the Student Games for Higher Education Institutions at Ural State University of Physical Education (UralGUFK). At one of the most popular competitions, more than 50 athletes from Rank 3 to Master of Sport of Russia entered to compete.

The participants of the competition were greeted by the acting Rector of UralGUFK, Sergey Serikov, and the head of the region’s GTO office, Aleksandr Belenkov. Representatives of teams from SUSU, UralGUFK, South Ural State Agrarian University, and Nosov Magnitogorsk State Technical University fought for the first place.

The fights were spectacular and memorable, the crowd could feel incredible strength and power in the eyes of the competitors. At the end, students from SUSU and UralGUFK fought to become the winners. After a series of fights, the SUSU students snatched victory from their rivals and earned first place, showing the best results. UralGUFK took second place, and the team from SUSAU took bronze.

“Boxing is a sport for those who are brave and courageous! Today, the masters of leather gloves once again proved the truth of this statement,” noted the Head of the Directorate of Sporting Events and the All-Russian Physical Culture and Sports System “Ready for Labour and Defence” (GTO) in the Chelyabinsk Region Aleksandr Beleknov. “The South Ural athletes showed their best qualities as fighters and their mastery in dynamic and enjoyable matches. In the spirit of rivalry and healthy competition, the fighters earned their victories.”

Congratulations to the winners!