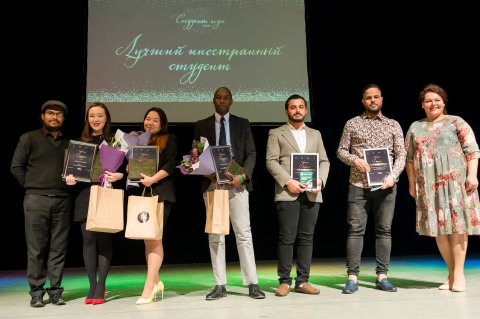 In December, the finals of the 2019 Student of the Year contest was held. This event gathers together students of South Ural State University. Besides students from Russia, international students were participating in the contest.

Student of the Year is a contest, in which the truly best students of South Ural State University compete in eight categories at once. Despite the fact that the contestants are quite young, they already have many university-related achievements, and their academic record mostly features marks from 4.5 to 5.

But not only Russian students were competing for the title of the Best SUSU Student. Among foreign participants were representatives of the countries of Africa, Latin America, Kyrgyzstan, Arab countries and other countries. This contest is only starting to gain popularity with international students: in 2019, it was only for the third time that they participated.

“All the international students who participated in the 2019 Student of the Year contest are very competitive: they are talented, active, and participate in many events being organized by the Association of International Students. We couldn’t tell who would win till the very last moment, and of course, we cheered for every one of them. For me, all the participants are winners,” shares President of the Association of International Students Uvindu Wijeweera.

According to the results of the expert selection round, the third place was awarded to a girl from Kyrgyzstan Ayana Aiypova, who is studying in the SUSU School of Medical Biology in the Food Technology and Biotechnology programme. She is an intern at the SUSU Young Leader School, student mentor, tutor and a representative for Kyrgyz students of SUSU.

The second place under the Best International Student Category was awarded to Fidel Benimana from Rwanda, Africa. He is also a student of the School of Medical Biology majoring in the Food Technology and Biotechnology programme, and currently acts as Deputy President of the Association of African Countries. Fidel is a talented student: he is successful in scientific work, goes in for sports, has event-packed student life, and is confident that our university has provided him with all the opportunities for development.

“SUSU provides equal opportunities both for Russian and international students. This is an international university, which binds together a variety of cultures. Here I’m trying to socialize and improve my Russian.”

The first place was awarded to SUSU student Hurelsuh Anhtsetseg, who came from Mongolia. The girl is a 6th-year student of the School of Medical Biology in the Clinical Psychology programme. She participates in many scientific conferences, and acted at Deputy President of the Association of International Students last year.

“I learned about this contest long ago, but have never applied to participate. This year I decided to take part in it since this is my last year as a student. In March of 2020 I will graduate. I submitted a video titled SUSU Is a Place for Development, which my friend from Mongolia helped me create. I’d like to thank her and all those who supported me and keeps supporting every single moment!” says Hurelsuh Anhtsetseg.

This finalist was awarded a certificate and granted an opportunity to participate in a student forum to be held in Sochi in 2020.