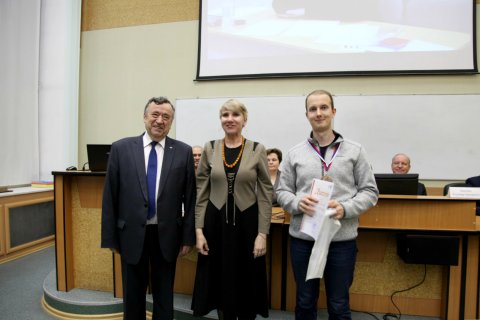 Within the Federal Target Programme “Research, Academic and Teaching Staff of Innovative Russia”, Volga State University of Technology, Ioshkar Ola, hosted the 2nd round of the 10th All-Russian Student Interdisciplinary Innovation Olympiad “Information Technology in Complex Systems”. The lists of students invited to the final round were determined by the points scored in the all-Russian ranking.

“I am very pleased with the participation in this event! My only regret is that you may take part in this Olympiad while you are still a student. At present I am a fourth-year student, that is why next year I won’t be able to participate, though it would be very interesting,” says Aleksey, who selected the field of Complex Systems in Architecture and Construction.

Students from the Institute of Natural Sciences and Mathematics selected the field of Complex Engineering Systems. The students noted that the tasks of the Olympiad were rather difficult.

“We were greeted warmly! It was interesting for me to visit the hosting university and the city in general. The most difficult thing for me was to prepare to the Olympiad as it was difficult to predict the knowledge I needed. The topics were published in advance; however, they were common ones. In the future I wouldn’t mind participating in this Olympiad again.”

One should mention that earlier South Ural State University had hosted the first round.