“How to Magnify Movement and Identify Photosensor Imprints”: Lectures by Professor Omar Fahmi Held at SUSU 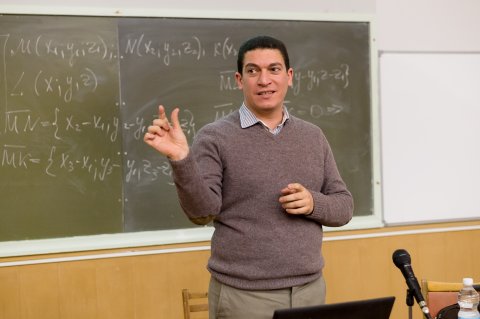 Professor Omar Fahmi, Associate Professor of Future University, Egypt, senior research fellow of the SUSU Department of Electronic Computing Machines, has been delivering lectures at the SUSU School of Electronic Engineering and Computer Science this week.

Omar Fahmi is an Associate Professor of the Department of Electrical Engineering of Future University in Egypt. In 2012 he was awarded PhD in Information and Communications Technologies. His field of study is the image processing, computer vision and their application. He has been engaged in the research of video processing and the magnification of moving objects in digital video in particular. He has been working at multimedia forensics and the problem of detecting fakes based on the individual characteristics of the camera and increasing the degree of resolution for images.

In SUSU he delivered two lectures: on Micromovement Magnification Techniques, and on Forensic Image Analysis. In the first lecture he spoke about magnification techniques for natural-video micromovements, which cannot be detected by the human eye. For example, a video of a sleeping child was demonstrated at the lecture before it was processed. The audience was not able to see any movements, and after its processing the active movement of the chest became visible. This magnification is possible thanks to four methods proposed by the professor: controlled pyramidal techniques, phase changing with Hilbert transformations, the Riesz pyramid method and the double tree-type method of complex wavelet transform.

“There are various applications for such technologies, for example, in medicine. Imagine that you are able to evaluate the ECG of people’s hearts with the help of cell phones. Or one will be able to see the engine detonation when designing a new car; in mechatronics engineering it will be possible to take into consideration the factors of engine vibrations; and in the construction engineering it will be possible to set up the building crane faster having the information on the weather and wind,” said Omar Fahmi. “The idea of video magnification with the complex wavelet transform is not unique, and if you search it on the Internet you will see that it appeared in 2015. MIT (Massachusetts Institute of Technology) has been using it since 2017, my technique is the third and the most advanced one at present.”

After the lecture the audience actively asked questions, the listeners were interested in the specifics of working with images and videos. For example, what one should do if a video has a lot of noise or the movement is less than one pixel; what computer resources are needed and what the requirements for the image quality are. Artyom Starkov, a first-year student of the Fundamental Informatics and Applied Technologies shared his opinion on the lecture:

“We are familiar with this topic as we have been studying and working in this field for several years. We have already been shown such technologies. However, we haven’t seen this approach and its application before. In general, this task is not a unique one, but its solution is new for us. We were really interested by the fact that we do not have to use expensive equipment. A usual camera or web-camera is able to capture little changes and predict them “loosening” the picture. It has never occurred to me before.”

According to Omar Fahmi, after the lecture he was asked two interesting questions that he would like to further develop in his research. The questions concerned the on-line video processing by a computer or cell phone, and the detection of the slightest movements in an image of less than one pixel.

The second lecture was devoted to another topic of image security or forensic image analysis. As the Professor said, from the moment of production the camera in a cell phone leaves its own imprint on all the pictures made with the help of this camera. Due to that fact it is possible to detect the changes in the areas on the pictures if they were fabricated. The lecture presented a new method based on the extraction of the signs of Zernike moments for the classification of PRNU correlated images, as well as detection of altered areas in the pictures.