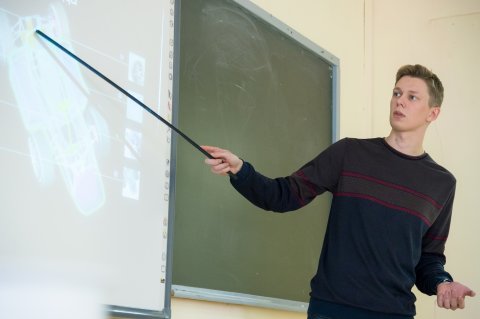 On November 19, the presentation of electric bolide, a new racing car created by university students as part of project-based learning, was held at South Ural State University.

The event was attended by the heads of departments of the SUSU Institute of Engineering and Technology, employees of Rezonans Research and Development Enterprise, as well as managers, developers and other project participants.

Project manager, Professor Aleksandr Gritsenko told about the characteristics of the new car.

"The main advantage of the project is the electric drive. Also in combination, mass and realized power capacity makes it to be the best model among the prototypes available in our country. The engine that we installed has the nominal rating power of 20 kW, the car mass is 240 kg, which adds acceleration to it. Thus, we are highly competitive with world leaders creating race cars under the Student Formula project."

The students told what aims and objectives were set before the development started, and what success they have achieved to date. Team engineer Aleksandr Lopukhov is studying in the project-based learning programme. He spoke about the differences of the new race car from its old model.

"The new car is in stark contrast to the previous model. The previous car was gas-powered, while the new one is powered by electricity. It is lighter, faster, more environmentally friendly. New technologies were applied for the car development, because the gasoline model is quite simple to assemble. Electric race car is an innovative model that is used by many of the best Student Formula teams around the world."

The mass of the new electric race car is 240 kilograms, while a gasoline car weighed 332 kilograms. The car has a 100Ah built-in battery for 7,500 watts and a 72 volt engine. The maximum speed of the electric race car is 160 km/h, while the acceleration of up to 100 kilometres per hour takes 5-6 seconds. No participant of the event stayed indifferent due to these and other features.

The guests of the presentation asked the developers questions, after which the car was presented to the participants of the event.

"Due to the questions that we were asked, we understood in which direction our project should be improved. We also want to thank everyone who actively participated in the discussion of the project, because thanks to such meetings, the project and we are only getting better!" says Head of the Student Design Bureau Grigorii Salimonenko

Let us note that the current model testing is planned for September at the All-Russian stage of racing in Moscow. Also, the car will be ready for demonstrations, which will be held in Tyumen. In addition, the car will participate in the Formula Student, an engineering competition where the best racing cars assembled by university students from all over the world are presented.