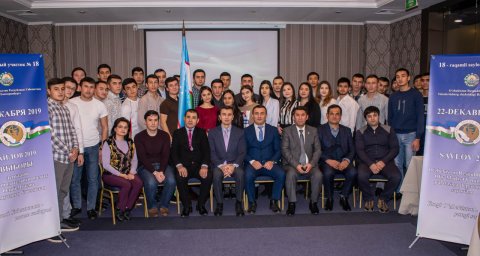 Intellectual games, bowling competitions, and new acquaintances: students from South Ural State University took part in an informative and entertaining event organized by the Consulate General of the Republic of Uzbekistan in Yekaterinburg. The meeting was dedicated to the Day of the Adoption of the State Flag of Uzbekistan.

On the eve of the National Flag Day of the Republic of Uzbekistan, the Consulate General gathered Uzbek students from Chelyabinsk, Tyumen, and Yekaterinburg. They were greeted by Consul General Abdusalom Khatamov, who talked about the upcoming elections for the Legislative Chamber of the Supreme Assembly, the importance of this event for the state, and the ability of everyone to vote at polling station No.18, which has been approved by the Uzbekistan Central Electoral Commission. The First Secretary Bekjon Kuvanov urged the students to be active, study well, and expand their communicative horizons.

SUSU was represented by 10 students from Uzbekistan who are studying in the Institute of Engineering and Technology, the Institute of Linguistics and International Communications, and the School of Economics and Management. The SUSU students were divided into five teams alongside other students from the Ural Federal District to participate in an intellectual competition. The main themes were the symbols of Uzbekistan and the history and culture of the Uzbek people. The teams were judged by an expert jury headed by Mamurzhan Kadirov, head of the Chelyabinsk public organisation Bobur. The second stage of the holiday event, team bowling competitions, was especially exciting.

“We took part in intellectual games dedicated to the culture and history of Uzbekistan and the Uzbekistan National Flag Day. There were both easy and difficult questions. For example, there are 12 stars on the Uzbekistan flag, they asked what they meant. There were questions about the historical heritage of Uzbekistan. In honour of the birthday of Alisher Navaiy, they asked us about his works. Then we bowled – the SUSU team won. I really enjoyed meeting different students from Uzbekistan. Representatives of the General Consulate invited us to another event which will be closer to New Year, and the awards ceremony will be held there,” said Askar Sultanov, student of the SUSU Automobile and Tractor Faculty.

The young Uzbek students enjoyed the format of fraternity, partnership and mutual support and promotion of Uzbek heritage which was presented by the consulate. The young men and women noted that this was not just a chance to demonstrate themselves and expand their knowledge, but get to know one another, create relationships with Uzbek students studying in Ural universities, and most importantly – proudly carry the flag of their country.

Azaliya Sharafutdinova, materials from the site of the General Consulate of the Republic of Uzbekistan: http://yekaterinburg.mfa.uz/