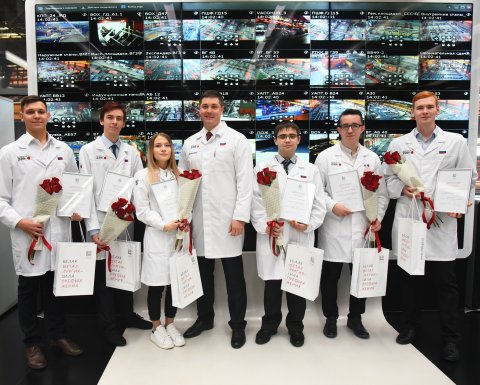 The annual awards ceremony for the Yakov Osadchy Foundation scholarship holders has been held at the Chelyabinsk Pipe Rolling Plant (ChelPipe, part of the ChelPipe Group).

The ceremonial event with the participation of students of South Ural State University, their parents and teachers was held in Vysota 239 (Height 239) workshop. Four A-students of South Ural State University: Dmitrii Gromov, Sergei Zakharov, Sergei Livinskii and Alexei Pushkarev, received certificates and annual scholarships in the amount of 5,000 roubles to be paid on a monthly basis.

The competitive examination of applicants for the scholarship included several stages: writing an essay on the topic "Pipes of the Future: Materials and Fields of Application" and passing an interview with the expert commission of the Yakov Osadchy Foundation and representatives of the ChelPipe Group.

"The scholarship of the foundation named after the legendary Yakov Osadchy is aimed at supporting and motivating talented students in the field of metallurgy. It is especially valuable for us that after graduation most of the scholarship holders decide to cast in their lot with the Belaia Metallurgiia (White Metallurgy), and the high-tech enterprises of the ChelPipe Group need such young professionals who are dedicated to their work and are ready for developing the production and self-improvement," said Aleksandr Fedorov, ChelPipe shareholder, Chairman of the Board of Directors.

Scholarship named after Yakov Osadchy was introduced by the ChelPipe Board of Directors 18 years ago in 2001 in honour of the centenary of the birth of the famous director of the Chelyabinsk Pipe Rolling Plant, an outstanding metallurgist of the Soviet Union and Hero of Socialist Labour Yakov Osadchy. Over the lifetime of the scholarship about 200 students of technical specialties from Moscow and Ural universities became its holders.

ChelPipe Group is one of the leading industrial groups in the metallurgical complex of Russia. At the end of 2018, the company's share in total shipments of Russian pipe manufacturers amounted to 16.5%. The ChelPipe Group unites enterprises and companies of the iron and steel industry: Chelyabinsk Pipe Rolling Plant; Pervouralsk New Pipe Plant; a warehouse complex selling the group's pipe products in the regions; the META company dealing with the procurement, process and sale of ferrous scrap; COT, ETERNO, MSA enterprises in Czech Republic, dealing with the production of trunking equipment; the Rimera group of companies representing the oilfield service business.