Lenin, Dante and Homer Met at the SUSU Historian’s Day 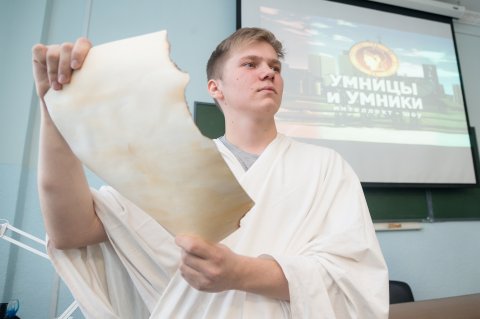 The Historian’s Day was held at the South Ural State University Institute of Social Sciences and Humanities. On this day, senior students traditionally hold the matriculation ceremony for freshmen of the Faculty of History.

This matriculation ceremony is a good tradition that formed at the Faculty many years ago. It has been carefully sustained and maintained for more than 20 years now.

“The matriculation ceremony is like an important conversation with freshmen on the matters concerning what awaits them during their study at the university, what sort of things to pay attention to, what kind of people to look up to, how to pace yourself so that you could have enough strength both for studying and for merry student life. Each time, there is something new in the process. Even the teachers don’t know the whole matriculation ceremony script, that’s why, sometimes, they find themselves in some funny situations. The distinguishing feature of our ceremony is that there's always a warm atmosphere to it,” said Igor Sibiryakov, Dean of the Faculty of History. “We are glad that the 1st-year students are now a part of our family, that they chose this profession and our university. And we really want to meet their expectations. Therefore, I wish good luck and patience to all of us.”

The main idea of the matriculation ceremony is that sophomores prepare a celebration for freshmen. The celebration opened with historical performance, where the heroes of different ages, such as Dante, Homer, a prehistoric man, Sviatopolk, Genghis Khan and many others were all mixed up. After that, the students took part in the Uminki i Umnitsy (Clever Heads) intellectual show, where they answered questions and solved historical intellectual riddles. Then a voting battle for the most important historical figure took place. The ceremony ended with sophomores rescuing their classmates from a caveman’s captivity. Lyudmila Balakina, Associate Professor of the Department of Russian and Foreign History, told about the preparation for the event.

“The script was written by the students themselves. There were a lot of discussions and arguments, but, in the end, I think it all worked out well. This matriculation ceremony tradition is 20 years now. We started it back in the times of the Faculty of Social Sciences and Humanities. We try to maintain it and hold the matriculation ceremony for history students every year.”

For their part, the freshmen also made a performance, narrating about how your mindset may change if you travel back in time and meet historical figures.

“I performed a primitive man, a made-up character. His name is First-faced Apollonius and he is a quite primitively aggressive. I enjoyed participating in the matriculation ceremony. Both preparation and performance were an interesting experience. When I was a freshman, there was also an amazing event, we had pirates, cavemen, and other characters, and it ended with a ritual flap with Nestor the Chronicler’s feather. Having received that light “flap”, you finally realize that you are a historian now, and the next step will be your summer practice, which could also be challenging,” said Klim Zhidkov, the sophomore.

Among those invited to the ceremony were the graduates of the Faculty of History, who came to share the memories of their merry student life, friends and work after graduation with the freshmen. They recommended the freshmen to absorb ideas, critical and analytical thinking that they are taught to use at the Faculty, and to continue their careers in the field of history.

The event ended with a traditional ritual flap with a “feather” for freshmen.