SUSU Holds a Series of Off-site Interactive Presentations for Applicants 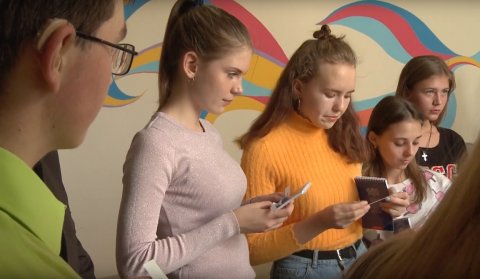 South Ural State University actively organizes career guidance work with applicants. In October, the Faculty of Pre-University Education, jointly with the schools and institutes, began a series of off-site interactive presentations for students of Chelyabinsk and Chelyabinsk Region secondary schools.

The main purpose of the off-site events is to show the SUSU opportunities for the 8th- to 11th-form school students not only from the South Ural Region capital, but also from many other cities of the region. The school students will learn about the fields of training of the university, why it is considered on the leading universities in Russia, as well as the prospects of professional activity after graduating SUSU.

Interactive presentations have been shown in Yuzhnouralsk, Magnitogorsk, in the Metallurgicheskiy District of Chelyabinsk. Intellectual quizzes and master-classes, reflecting the specifics of the SUSU educational subdivisions, were held for the school students.

“The applicants learned about the SUSU fields of study in practice, tried to do something with their own hands, played logic games, and solved interesting problems. Specialists of different schools and institutes presented different forms of interaction with applicants,” said Yulia Bolotina, Deputy Vice-Rector for Academic Affairs.

Apart from that, introductory meetings, as well as teacher-parent meetings for applicants and their nearest and dearest ones were held in Troitsk, Ust-Katav, Yuryuzan, Sim, Asha, Satka, and Bakal. There they were told about 5 steps to be made while choosing a university, fields of study and number of state-funded places, and about the programmes for high-scoring applicants.

Interactive events for school students will be held in Chelyabinsk major educational institutions till the end of October.

All up-to-date information, concerning the 2020 Admissions Campaign, was posted on the South Ural State University Portal for Applicantsвon October 1st. Already now, future students have an opportunity to learn about the procedure of documents submission, benefits, individual achievements, for which additional scores are given, and other important information.