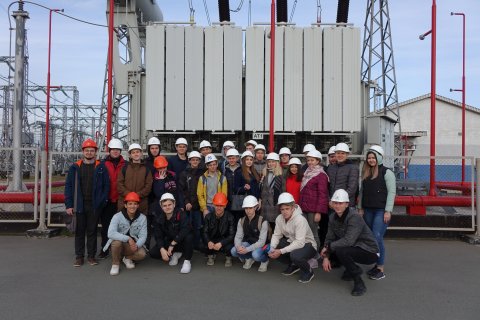 South Ural State University students have been to an electric power substation. An excursion for future power engineers was held within the framework of the All-Russian Brighter Together Festival.

The Open House Day for the guests of the 220 kV Novometallurgicheskaya substation of Rosseti Federal Grid Company of Unified Energy System Branch Office of South Ural Main-line Electrical Grids started with safety precautions briefing. Then, future power engineers learned about the control panel and the auxiliary service panel, accumulator batteries, ensuring the substation self-containment in case of emergency situations. They also examined the open switchgear equipment. The 4th-year students have already designed separate units and elements of substations, and now they could observe the real time work of the equipment and ask Sergey Rtishchev, the professional and the Head of the Chelyabinsk Group Substations, questions on all they were interested in.

“Of course, everything looks different in practice,” share the students. “We were really interested to take a look at the operation of such a large energy-generating facility in terms of energy efficiency and the opportunity of new technologies introduction.”

The 220 kV Novometallurgicheskaya substation was chosen on purpose for the excursion. The substation is fitted with the most state-of-the-art equipment and supplies electric power for an important area.

“The Chelyabinsk giants, like MECHEL and CHEMK, get power supply directly from us. System failure in the substation’s operation can cause billions of losses due to the production stoppage,” said Sergey Rtishchev.

It is the second meeting between students and the South Ural Main-line Electrical Grids personnel in this academic year. Such events popularize modern energy efficient technologies, help future power engineers to choose their future career, and learn more about the operation of the Unified Energy System.