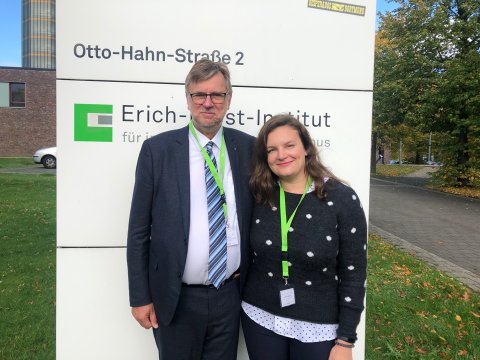 Associate Professor of the SUSU Department of Journalism and Mass Communication, Anna Krasavina, took part in another science-to-practice conference on Journalism in a Global Context arranged by the European Journalism Training Association (EJTA) and held at the Institute of Journalism of the Technical University Dortmund (Germany). The Conference in Dortmund had been arranged in cooperation with the Africa Institute for Media, Migration and Development (AIMMAD) and the African Media Initiative (AMI) Association under sponsorship of the Robert Bosch Foundation. Its key topics for discussion were digitalization, cooperation and cross-border activity in the sphere of international media research and journalism training.

An important moment at the Conference was presentation of South Ural State University as the venue for hosting the EJTA Conference entitled “Building of a Eurasian Bridge in Journalism Education” in October of 2020. For this moment specially, a video about the university and its media laboratories had been created at SUSU-TV Television and Radio Company. One of the characters in this movie was a virtual co-host who “guided” an excursion around the media floor (which includes student TV and radio broadcasting offices, newspaper editorial office and a convergent newsroom) for participants of the Conference together with the host Anna Krasavina. The audience highly praised such a creative and hi-tech level of the movie which has been recorded as a documentary with some elements of augmented reality.

“We are very pleased that all participants of the EJTA Conference heartily applauded to the video created by students, academic and administrative staff of SUSU,” said Head of the Department of Journalism and Mass Communication, Dean of the Faculty of Journalism, Doctor of Sciences (Philology), Liudmila Shesterkina. “We showed unique capabilities of the university in arrangement of journalism training at the professional media platform of the university as well as our readiness for cross-border cooperation. This precise cooperation will become the key focus at the EJTA Conference entitled ‘Building of a Eurasian Bridge in Journalism Education’ which is to be held at SUSU in 2020. There are more and more instructors of journalism who include the aspects of cross-border journalism into their curricula. The EJTA itself, for instance, have launched the EUfactcheck project in which SUSU has been participating for the second year in a row.”

Also, Associate Professor Anna Krasavina and Frederik Marain, the Senior research fellow at the SUSU International Research Laboratory of Virtual Reality, lecturer at the Artesis Plantijn University College Antwerp, delivered a report at the Conference’s section entitled “Modern Challenges and Innovations: Projects and Results” on establishment of the International Research Laboratory of Virtual Reality at SUSU. As a result of the Conference, the following agreements regarding the continuation of SUSU’s participation in the EUfactcheck project have been reached: preliminary agreement on master classes arranged at SUSU and held by lecturers of the Institute of Journalism of the Technical University Dortmund; an agreement on cooperation between the SUSU Faculty of Journalism, the School of Journalism and Mass communication of the University of Dar es Salaam (Tanzania) and the School of Communication, Language, and Performing Arts of the Daystar University (Nairobi, Kenya).