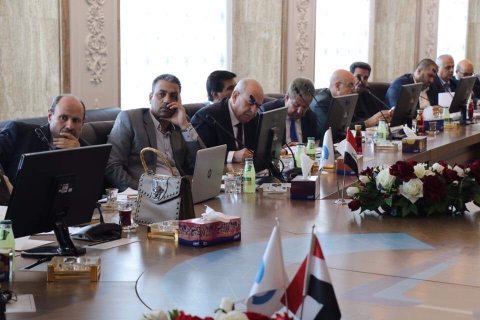 In October of 2019, South Ural State University signed an agreement with the Ministry of Higher Education and Scientific Research of the Republic of Iraq. A memorandum on mutual understanding which assumes an extension of cooperation in the spheres of higher education as well as in research, scientific-and-technical and innovative activities of Russia and Iraq has been signed. A considerable role in this belongs to the fact that the university alumni – Iraqi – actively recommend the university to soon-to-be students of their country.

We talked to an Iraqi alumnus of SUSU who is currently the Head of the Department for Research at the Ministry of Higher Education and Scientific Research of the Republic of Iraq, Mohamed Al Kadim, about choosing the university, true friendship between international students in Russia, and about how knowing Russian language helps getting hired according to one’s specialty and climb up the career ladder.

– Why had you chosen Russia to study in?

I decided to study here because it is exactly in Russia that one can get high-quality education. Moreover, I’d got a chance to study by state-funded quota. SUSU is in the list of higher education institutions accredited by the Ministry of Higher Education and Scientific Research of the Republic of Iraq, therefore, students have the right to get scholarships for studying at this university. The list of such universities gets updated every year; all higher education institutions undertake a very tough selection: their academic results and scientific accomplishments get taken into account. The fact that SUSU maintain its position in this list verifies the high quality of education. SUSU has got a good reputation, it is well-known in Iraq. Besides, I was attracted by its beneficial geographical location in the Urals, between Europe and Asia.

– What did you like the most about Russia? What surprised you most?

I liked the people. They are kind and responsive; I could always get help at the university. Big thanks to the specialists working at the International Student Support department of the International Office. Overall, Russia surprised me with its cold weather. I read about the climate in your country, but the contrast between Iraq and Russia turned out to be very big. But all of this gets offset with the friendly attitude of people.

– How did you make probably the most important choice in your life and have chosen your specialty?

At first, having decided to get enrolled at SUSU, I chose majoring in Journalism, but I was the only one foreigner among other students and it turned out that I didn’t yet have enough knowledge to study at the Faculty of Journalism together with Russian students; a high level of Russian language knowledge had been required there initially. I decided to get transferred to Master’s studies at the Institute of Linguistics and International Communications and study Russian as a Foreign Language. This was a lucky choice because I got qualitative knowledge in Philology, have learned Russian language and can speak and understand it fluently. Now I am working at the Ministry of Higher Education and Scientific Research of the Republic of Iraq according to my specialty.

– What are your job responsibilities?

I head the Department for Research which coordinates scientific and cultural activities in universities and private colleges, including arrangement of conferences, workshops, participation in international conferences. We work with the issues of joining international organisations by universities and public colleges. Russian language knowledge helps a great deal in my job because I frequently have to face various problems solution of which assumes speaking Russian at a high enough level.

– What is that you especially liked and memorized about SUSU?

I am grateful to SUSU for comfortable studying conditions, for the chance to get really high-quality knowledge and study in a very friendly atmosphere. I am especially thankful to the following SUSU teachers: Head of the Department of Russian as a Foreign Language, Elena Kharchenko, Yulia Kazakova, Elena Doronina, Olesya Sharafutdinova, and the others.

– Have you made any new friends while studying in Russia? Who has left you with especially warm memories?

At pre-university training courses our entire group included students from Iraq but we have never met before. Of course, we became really close friends and we still keep in touch. The friendship that originated while studying at a university is the strongest one. We used to study abroad, far from our motherland, and this made us closer. We all fondly recall the time of studying at SUSU. Within Master’s degree programme, I was studying with Arab and Chinese students with whom we are still in good relations.

– What difficulties did you encounter while studying in Russia?

The main problem for those studying in Russia for the first year is the language. But we’ve got a lot of help from everyone! I’d like to extend special thanks to the Head of the International Student Support department, Ekaterina Yurovskaya, and her colleagues. Specialists of the International Student Support department at the International Office have always quickly come to our aid when solving issues in the bureaucratic sphere. Lecturers at the Department of Russian as a Foreign Language were patient in explaining all the necessary expressions to us and supporting us in the process of adaptation to the new unfamiliar environment.

– What would you advice to Iraqis who are going to study in Russia?

First of all, choose a university wisely. Speaking of me, I had made the right choice (smiling). Moreover, my advice to future students is to start learning Russian beforehand, prior to them leaving to Russia, and of course, be ready for a freezing winter. However, there is no use of being afraid of cold. This problem gets easily solved with warm clothes.