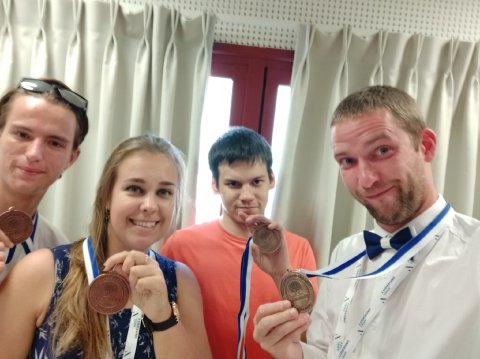 The Super Final of the Open International Internet-Olympiad in mathematics was held in the Ariel University in Israel. SUSU team of students defended the honour of the university and added new victories to the university's collection.

Dmitriy Gordievskih (ЕТ-122) was awarded a gold medal in an individual Olympiad. This happened for the first time since 2011 when SUSU started to participate in the super finals of this prestigious intellectual competition.

The other university representatives proved themselves no less worthy: Alexei Antsiferov (ЕТ-415) was awarded a silver medal, Marina Vasilenko (ЕТ-422) and Kirill Nebero (ЕТ-212) were awarded diplomas of the 3rd degree.

Also within the framework of the competition, a team Olympiad was held, for which the participants were divided into 20 teams of four people. SUSU students were awarded bronze medals.

Nadezhda Muravyova, Associate Professor of the Department of Applied Mathematics and Programming, headed the SUSU team at the Olympiad and took part in the work of jury.

“This was my first trip and I enjoyed it a lot. We are very happy about our students’ victories and are pleased with the results. I wish the guys further growth, development and new victories in mathematics,” said Nadezhda Muravyova.

Among the Olympiad participants were more than 90 students from 7 countries: Israel, Kyrgyzstan, Poland, Russia, Romania, Turkmenistan, and Uzbekistan.

Due to the strict selection, it is quite hard to become a super final participant. This year in spring, students passed selection rounds in the Russian final of the Olympiad in Yoshkar-Ola, following which two SUSU students were invited to the super final in Israel, and two more places were allocated to the university as a permanent participant and the Olympiad prize winner. This was the 10th trip to the super final for SUSU students and teachers. Preparations for the Olympiad are held throughout the year. SUSU students took part in SUSU mathematics competition, Olympiads in Kazan, Ufa and Tula, and were also tutored by the academic staff of the Department of Applied Mathematics and Programming.

It is important to note that each student’s award is added to his personal account, and an increased scholarship is calculated based on the results.

After the Olympiad, an entertainment program was organized for participants. They were taken to trips to Tel Aviv and Jerusalem.