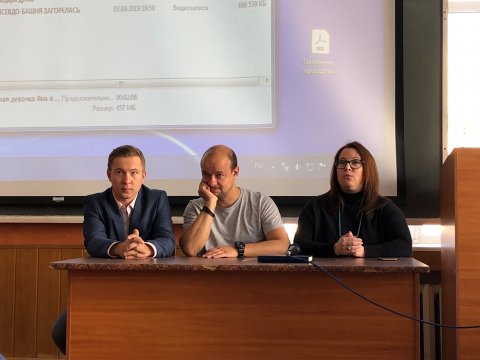 Within the training process for students of the Elite Education Cluster at the SUSU Faculty of Journalism, a master class was held by Director of Yuzhny Ural State Television and Radio Broadcasting Company Evgeniya Dmitrenko, and hosts and reporters of Vesti – Yuzhny Ural and Sobytiya Nedeli news programs – Aleksey Sanochkin and Lev Bitkov.

The master class was dedicated to the specifics of work of a modern reporter. The television journalism professionals unveiled the secret of reporting mastership to students, which can be worded in one short phrase: “to be capable to be present everywhere and at all times”.

As an example of quality work of a reporter, the first-year students were demonstrated a video report dedicated to one of last year’s tragic events: utility gas explosion that happened in a residential building in Magnitogorsk on December 31st.

After the video, the master class holders shared the details on the work of a reporter “behind the camera”: they described the atmosphere on the site of the explosion and the difficulties, which the journalist faced when talking to the casualties and their relatives. The speakers noted that very different situations may occur, and that a journalism must be ready for them.

Lev Bitkov was also a participant in big sports competitions: sailing races in Greece and in the Atlantic. He shared his stories of sleepless nights on-deck when shooting a footage, or of doing cross-cutting using the primitive tools available at the moment. He also demonstrated a video report being the result of his hard work as a reporter. The Faculty of Journalism freshmen asked journalists many questions and were given comprehensive answers.

First-year student of the Department of Journalism and Mass Communications Alisa Zakharyeva shared her impressions from the meeting with the journalists:

“My impressions from the master class are wonderful. I learned a lot of new and helpful information. After this master class I finally realized that I was right to choose the SUSU’s faculty. I like studying here very much!”