“Welcome to the Family”: First Information Day for International Students Held at SUSU 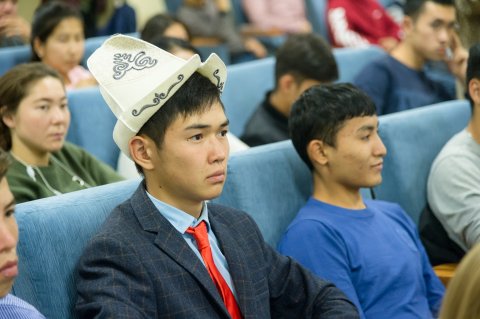 On September 17 at the Conference Hall of Sigma Academic Complex, the annual meeting of representatives of SUSU subdivisions with international students took place. The event was held under support of International Office and Association of International Students.

This is the third year in a row that Information Days are held for international students. As per tradition, they are divided into meetings arranged for near-abroad and far-abroad international students. The first meeting in the new academic year was held with freshman students from near-abroad countries: Tajikistan, Kirgizia, Azerbaijan, Kazakhstan, Armenia, Ukraine, Belarus and Uzbekistan. Overall, there were about 250 people present at the meeting.

The main topic of discussion at the meeting was the issues that might occur with students who have just arrived to Russia. The goal of SUSU administrative staff is to help freshman students to adapt and solve these issues.

“These are our traditional meetings with all freshman students. They are arranged in order to explain international students the rules of residing and staying in Russia and studying at the university. The meetings are intended to clarify all pressing matters faced by every student coming to the university. After our meetings, students are more informed about all important matters and we, in turn, are not worried about their stay here.”

Presenting their speeches at the meeting were Head of the Immigration Services Office, Marina Davydova, Director of the SUSU House of Health Medical Centre, Olga Veselova, Head of the Extracurricular Activities Department, Svetlana Iudochkina, Head of the Department of Physical Education and Health, Evgeniy Cherepov, and the Director of Campus, Liudmila Zadorina. This year, the speakers were joined by Deputy chair for Student Union Affairs of the Student Union, Aleksandr Pryadein, in order to provide more details regarding the issues of stipends and welfare assistance which students studying on state-funded basis can get.

Head of the Extracurricular Activities Department, Svetlana Iudochkina, talked about the opportunities provided by extracurricular activities at the university. She offered various activities in which students can fulfill their talents, no matter if it’s dancing, KVN, sports or anything else. At the end of her speech, students were shown a short video about eventful student life.

Head of the Department of Physical Education and Health, Evgeniy Cherepov, talked about fitness sections and sports existing at SUSU as well as about the important role of exercising sports. He noted that the wide range of SUSU sport facilities allow practicing sports at a professional level. Besides, students have a chance to master the profession of a Fitness Coach provided they take additional classes on weekends.

Director of the SUSU House of Health Medical Centre, Olga Veselova, talked about the necessity to get a medical insurance and explained how to protect oneself from catching a cold during autumn and spring and, what’s more important, what to do in case of getting sick.

Director of Campus, Liudmila Zadorina, reminded on the rules of behaving at a dormitory and conducted a mini-quiz on fire safety. The most active students got useful prizes.

Deputy chair for Student Union Affairs of the Student Union, Aleksandr Pryadein, talked about stipends for students studying on state-funded basis as well as on a chance to get welfare assistance.

Head of the Immigration Services Office, Marina Davydova, provided up-to-date information on the migration legislation, on how not to make a mistake when executing migration documents, and on how to get officially employed in Russia. She also warned international students about possible violations of migration laws and rules of the Russia Federation, and about the responsibility for their violation.

The last to speak was the President of AIS, Uvindu Wijeweera. He noted that the Association includes more than 3000 people already. He talked about events arranged by the Association of International Students, and about how students belonging to different cultures and religions get united in one big family during the process of studying at the university. He introduced students to representatives of each country and talked about the types of national holidays celebrated at the university.

“I would like to remind all freshman students that study is the most important. In just 4 or 5 years you will get a degree, but if you have many academic deficiencies, there will be a lot of troubles. I would like to wish all students success in their study!” said Uvindu Wijeweera, the President of AIS.

In the course of the meeting, students asked the speakers questions of interest; the most frequently asked questions were about welfare assistance and migration legislation.

The meeting was concluded by the International Office Head Liudmila Lapina saying “Welcome to the SUSU family!”

Ahead of us are several more Information Days for international students coming from far-abroad countries.