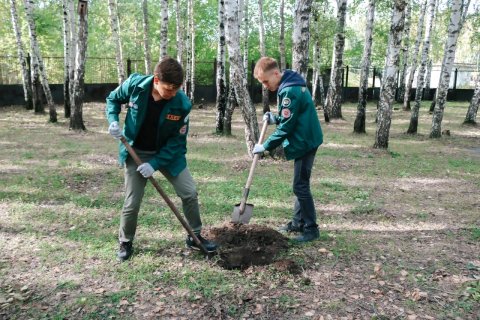 Team Vitya visited the social rehabilitation centre of the Metallurgical district. There, team members arranged planting of trees and held a homeroom dedicated to the 15th anniversary of the tragedy in Beslan.

“We symbolically started the new academic year by planting trees together with children. Every kid applied themselves to this activity and we helped them. Despite the cloudy weather, this day was warm and bright thanks to the smiling children!” said a member of Vitya SPT, Nikita Larkin.

Apelsin SPT visited the social rehabilitation centre of the Traktorozavodsky district where they not just planted pine trees but also played some games with the children.

“At first, children looked confused. I decided to break the ice and offered a nine-year-old girl to plant a tree, but she got taken aback and quietly said that she’s never done this before. After I told her that this is easy and together we can make it, she took the initiative and asked me to borrow the shovel. Then she started planting a tree with a lot of enthusiasm,” said Leonid Danilko, team member of Apelsin SPT.

Let us add that the Green Troopers flash mob is held under support of the City Administration of Chelyabinsk and the Southern Ural Chelyabinsk Regional Children’s Foundation.